We officially broke ground on the garage project on Wednesday the 20th. My father-in-law had arranged to borrow an excavator from a friend in town, and we decided to dive right in as soon as the machine was delivered. We plan to use the tractor to dig trenches for the water line from the house; for the electric service from the meter to the garage site; and for the footings around the perimeter of the garage. 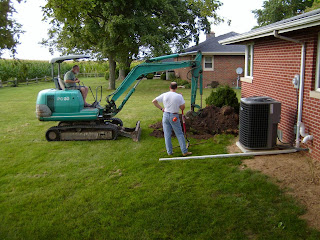 The ground breaking began back at the house where we plan to connect the water. Due to the location of the new garage, we knew it would be a pretty long run, but we were pleasantly surprised to find a waterline over 4 feet underground that wasn't being used. I'm sure you're wondering what that line was doing there. My neighbor (house in the background) has lived in his house since he built it about 50 years ago, and at the time our house was owned by his uncle. Our neighbor had a shallow well that would go dry in times of drought, so the uncle offered to connect both houses to the well on our property. The neighbor's well was drilled deeper several decades ago, but the water line remains. Hence we have a line plumbed through the basement wall complete with a shut off valve near the pressure tank. We will replace the pipe outside, and reconnect the new line with the old in the basement. 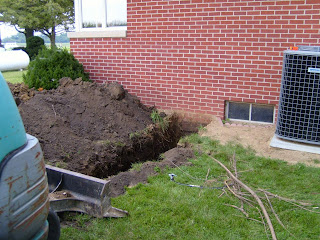 We used the wider bucket on the excavator since we need to get into the hole to work, but will use the narrow 8" bucket for most of the other work. 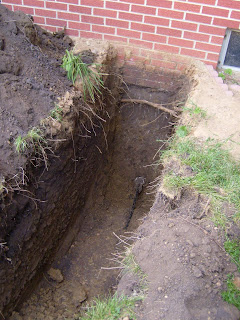 Here's a look down into the hole once I had the loose dirt cleared away from the pipe. That black plastic line about an inch in diameter is the blessing God bestowed on us for this part of the project. We would love to see God show similar grace in other stages of the project, but we'll be content with what he gives us.

A point of clarification: even though the hole is almost five feet deep, the black dirt doesn't really go all the way to the bottom -- there's only about four feet of the black stuff before you get into clay. Has God blessed the soil in this area or what?
Posted by Mr. Riggenbach at 8:35:00 PM