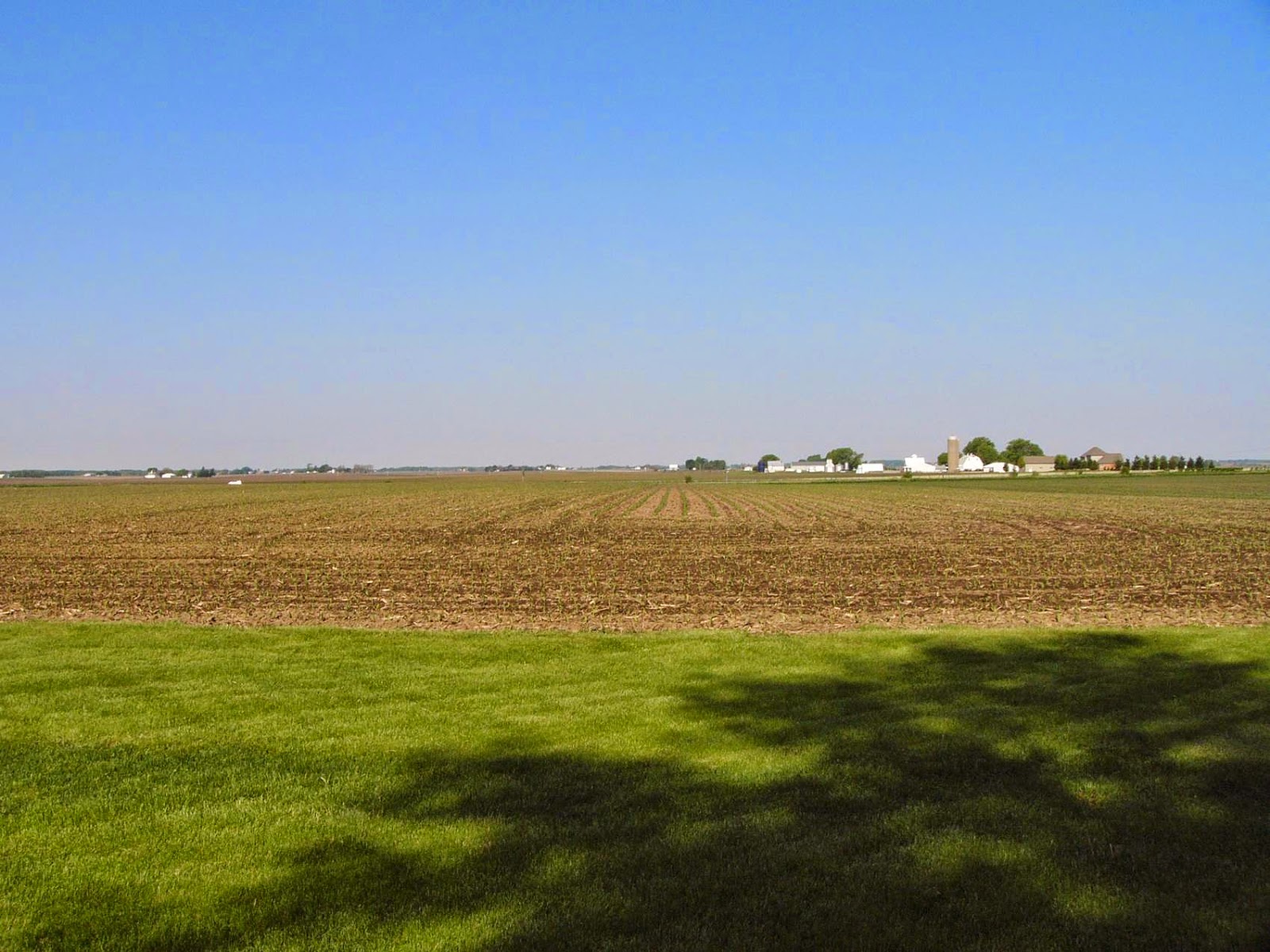 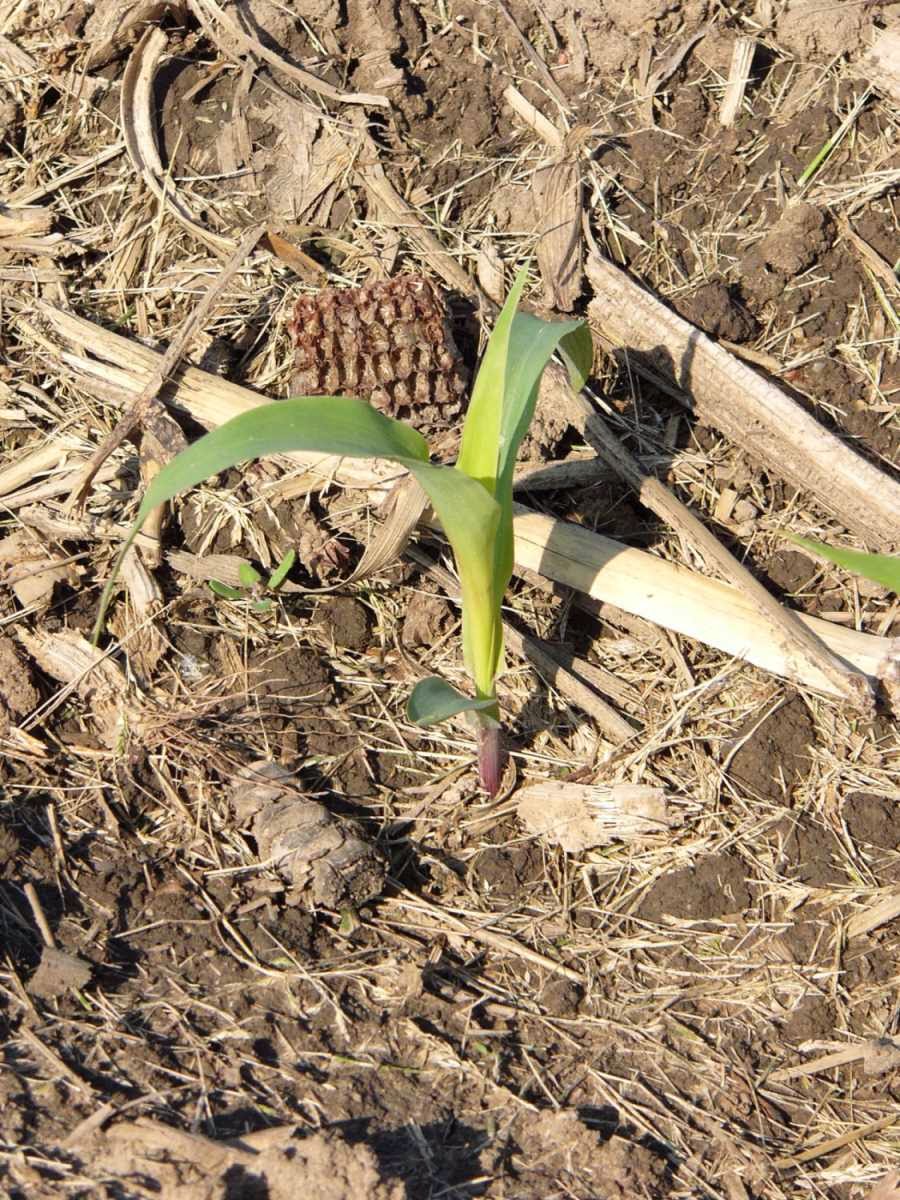 There was little change in the corn field during the second week as cold temperatures moved in on Tuesday and stayed through Saturday, resulting in only an inch and a half of stalk growth.  This plant was pretty typical of most and stood 4.5" tall on Sunday. 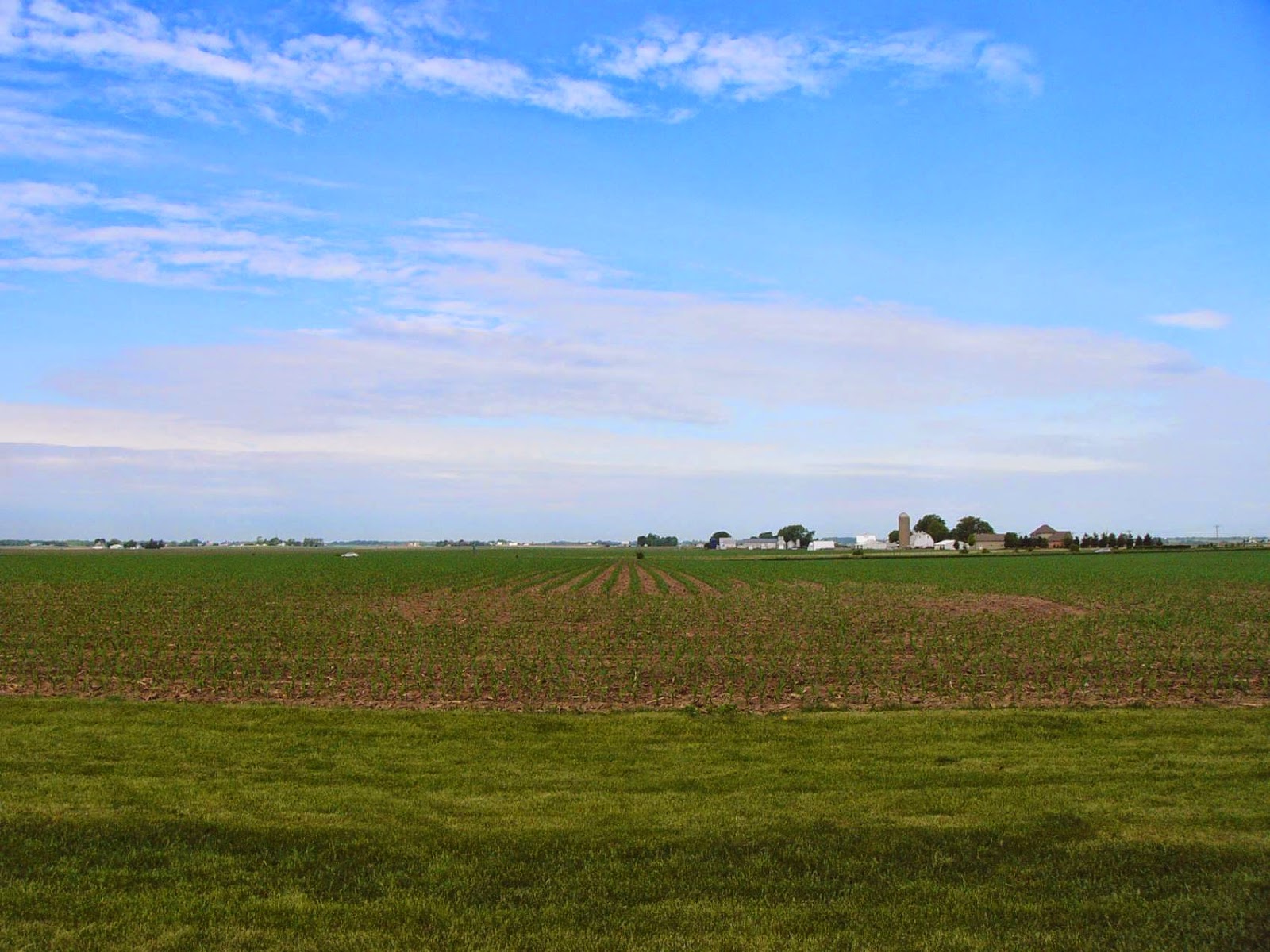 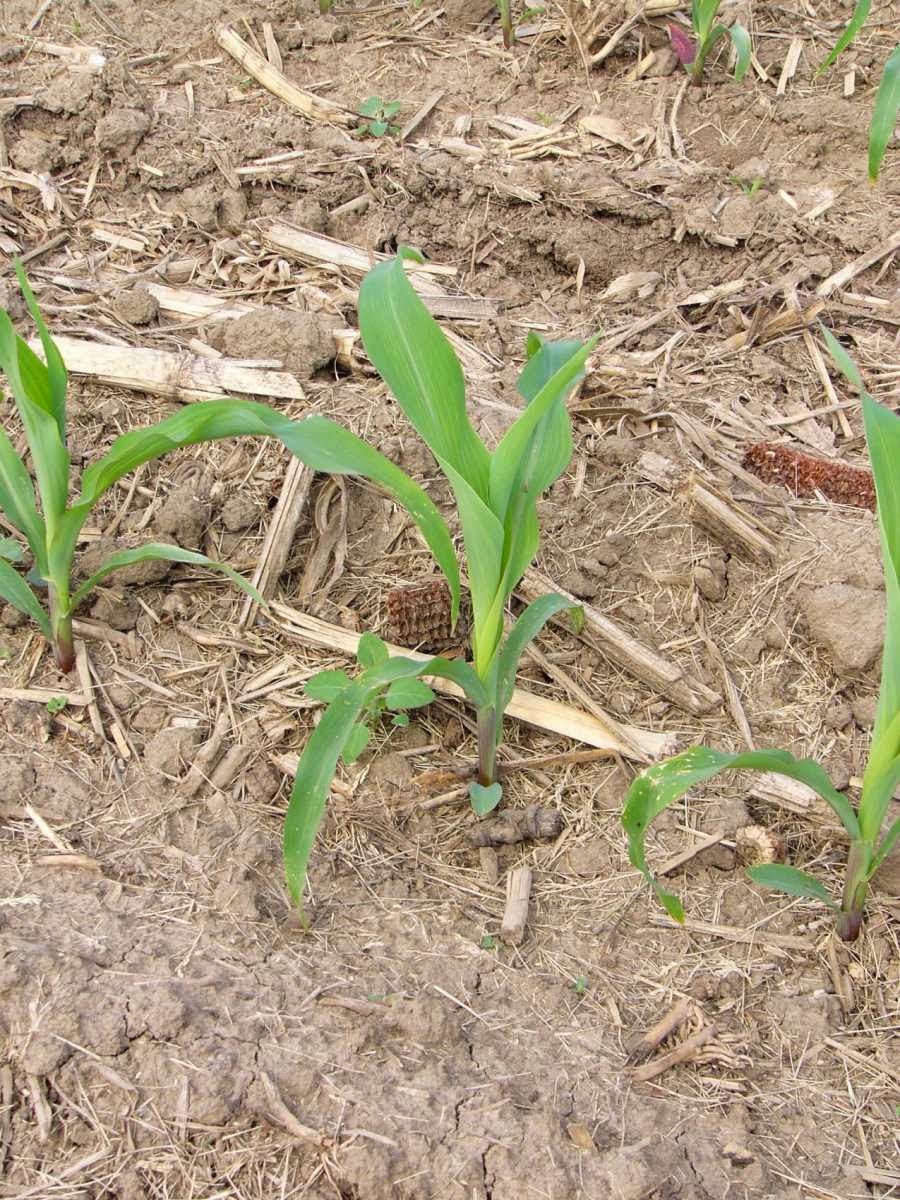 The plants sprouted more leaves and grew 3.5 inches during the third week as we had almost thirty percent more growing degree days than normal.  Rainfall has been falling behind the normal trend, although the the corn doesn't seem to be suffering yet.

Back on February 13, I showed temperature data for the heating season and winter that showed a colder-than-average trend through that date.  Now that the heating season is most likely behind us, we can look at the data for the full season.  The first chart shows the full winter from December 21 through March 20 and even though the last couple of weeks averaged less than one degree F colder than normal per day, the consistently colder stretch from February 22 through March 6 pushed the cumulative deviation to a total of 532 degrees colder than average. 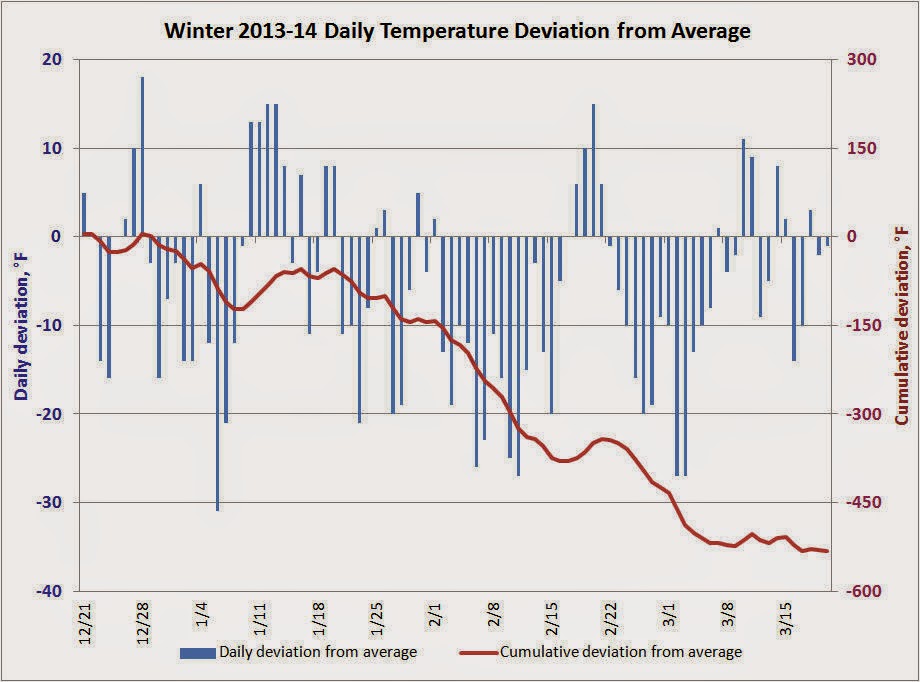 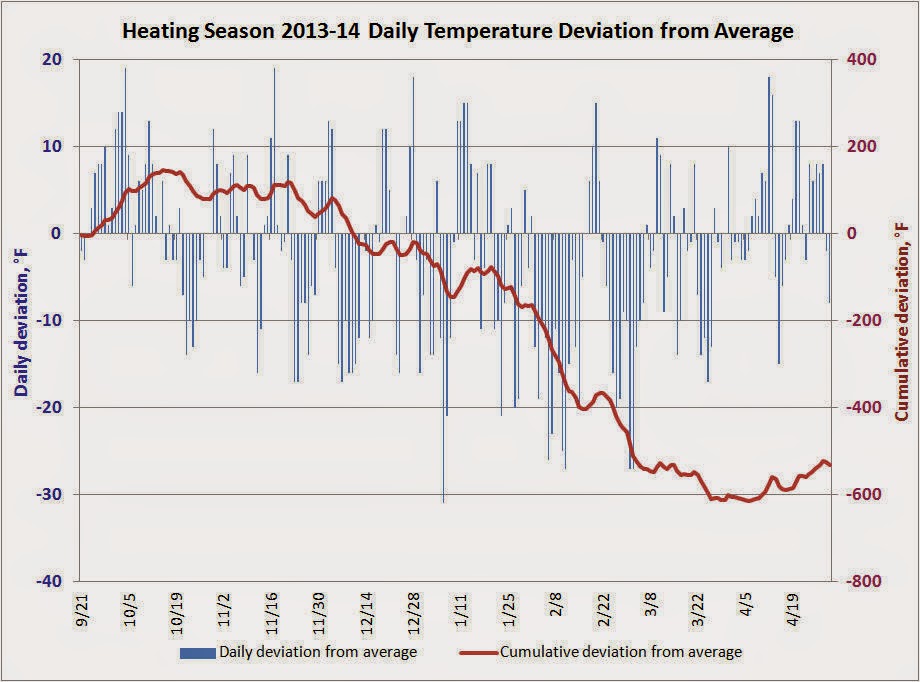 If we look at the entire heating season, we see a similar trend in that even though the average temperatures warmed a bit in April, the average over the entire season was still over 4 degrees colder than normal.  The cumulative deviation from normal ended the month of April 533 degrees colder than average which means the days between the end of spring and the end of April averaged out to be about equivalent to the historical average.

The effects of winter are still apparent in several places: yew branches that were frozen beyond recovery, rose bushes that didn't survive, and although the almond bush bloomed a couple weeks ago, many of those branches now appear to be dead.  We're happy to concentrate on growing-degree days now, and are hopeful for some harvest from those plants that survived the winter of 2013-2014. 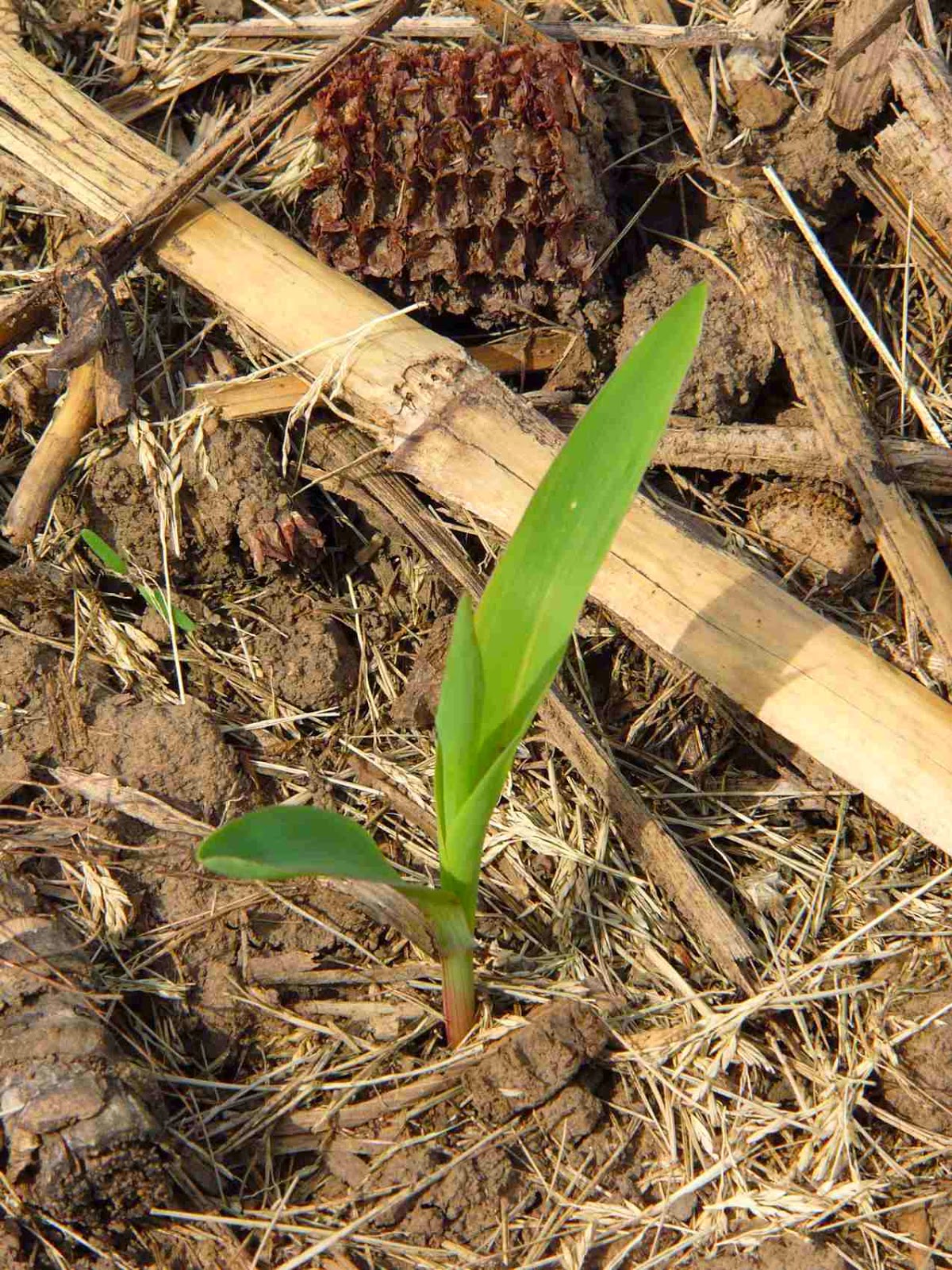 You can barely see the rows of plants in the photo at top, as they are only 3 inches tall, but then they only just emerged a few days before these pictures.  Even though the winter was colder than typical, April's daily temperatures averaged over two degrees above the historical average.  Over the week before this photo was taken, we were blessed with twice as many growing degree days as we typically get for this time of year, so it probably shouldn't have been surprising to see the corn pop up.

As always, we'll monitor the growth in the backyard so you won't miss any of the excitement!