Have you ever noticed how a room can grow and shrink with each successive phase of a project? In this case, I believe mounting the drywall sheets to the walls of our basement made the rooms grow a bit.  Here are several photos at different stages of completion. 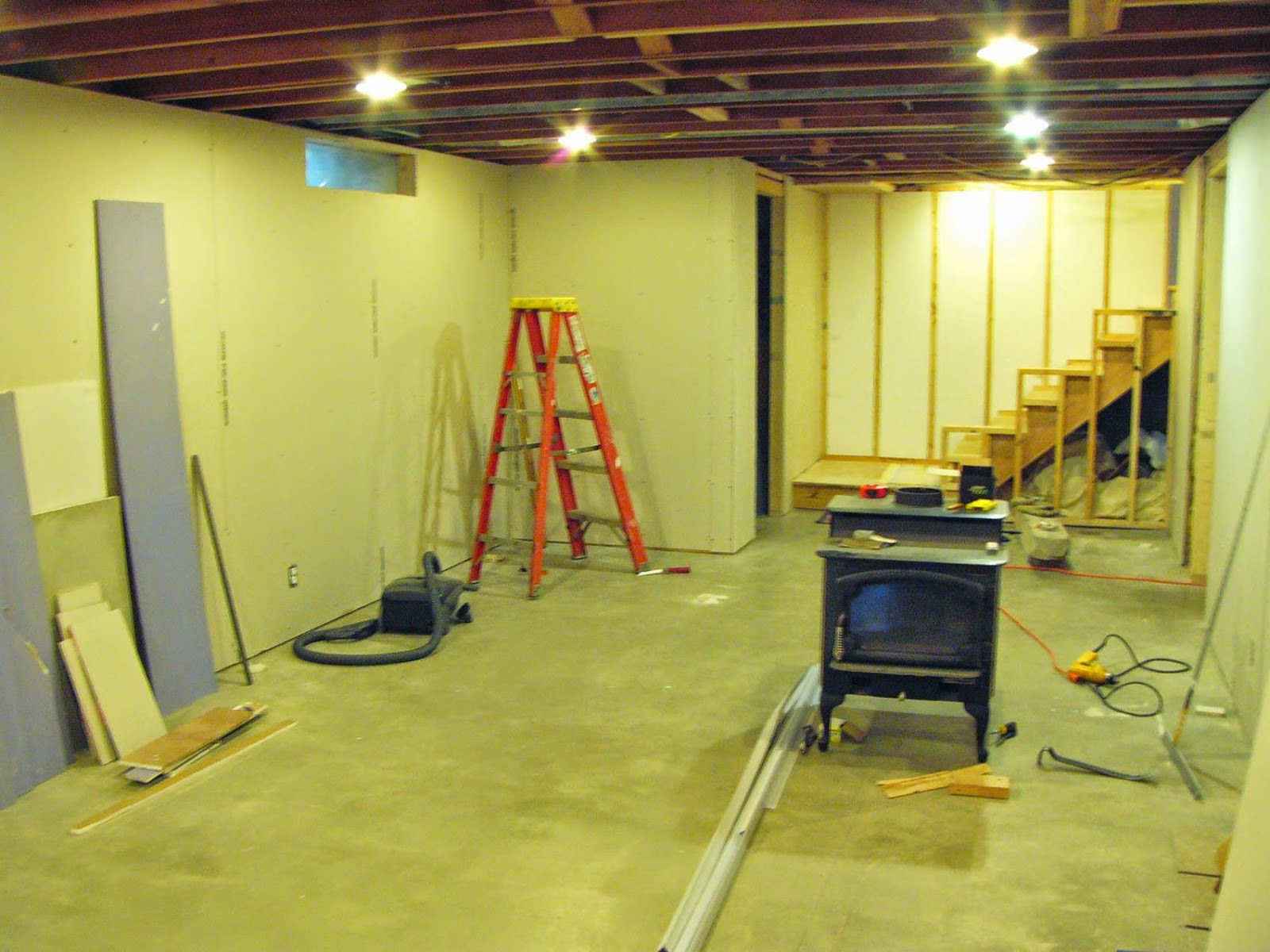 This image shows the south end of the family room early in the hanging process. 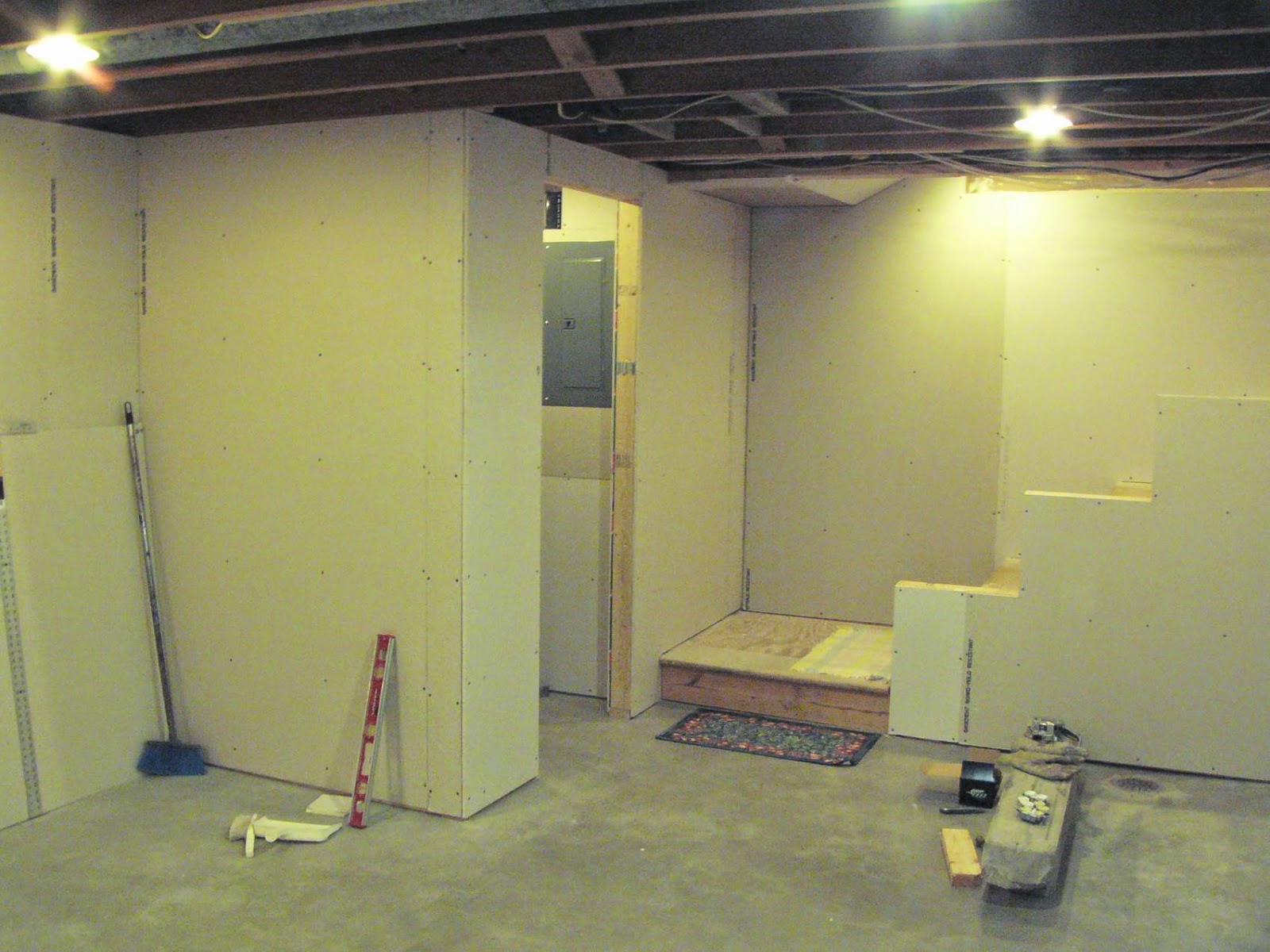 A closer view of the pantry closet and stair landing a little later, but not quite at the end. 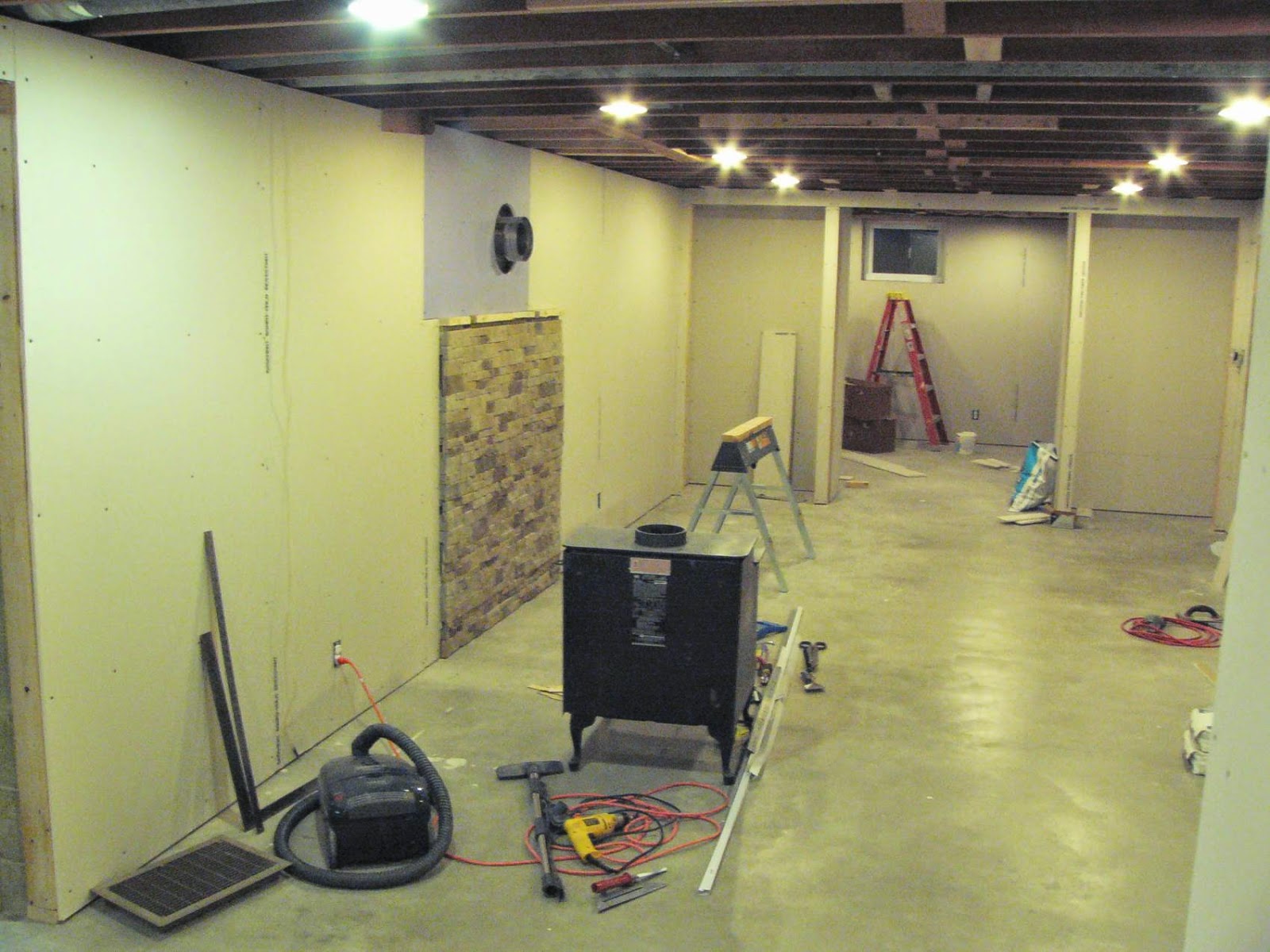 The view to the north from the stairs shows the closets on the north end of the family room more clearly.  The pieces of drywall that don't match the majority are simply scraps left over from prior projects. 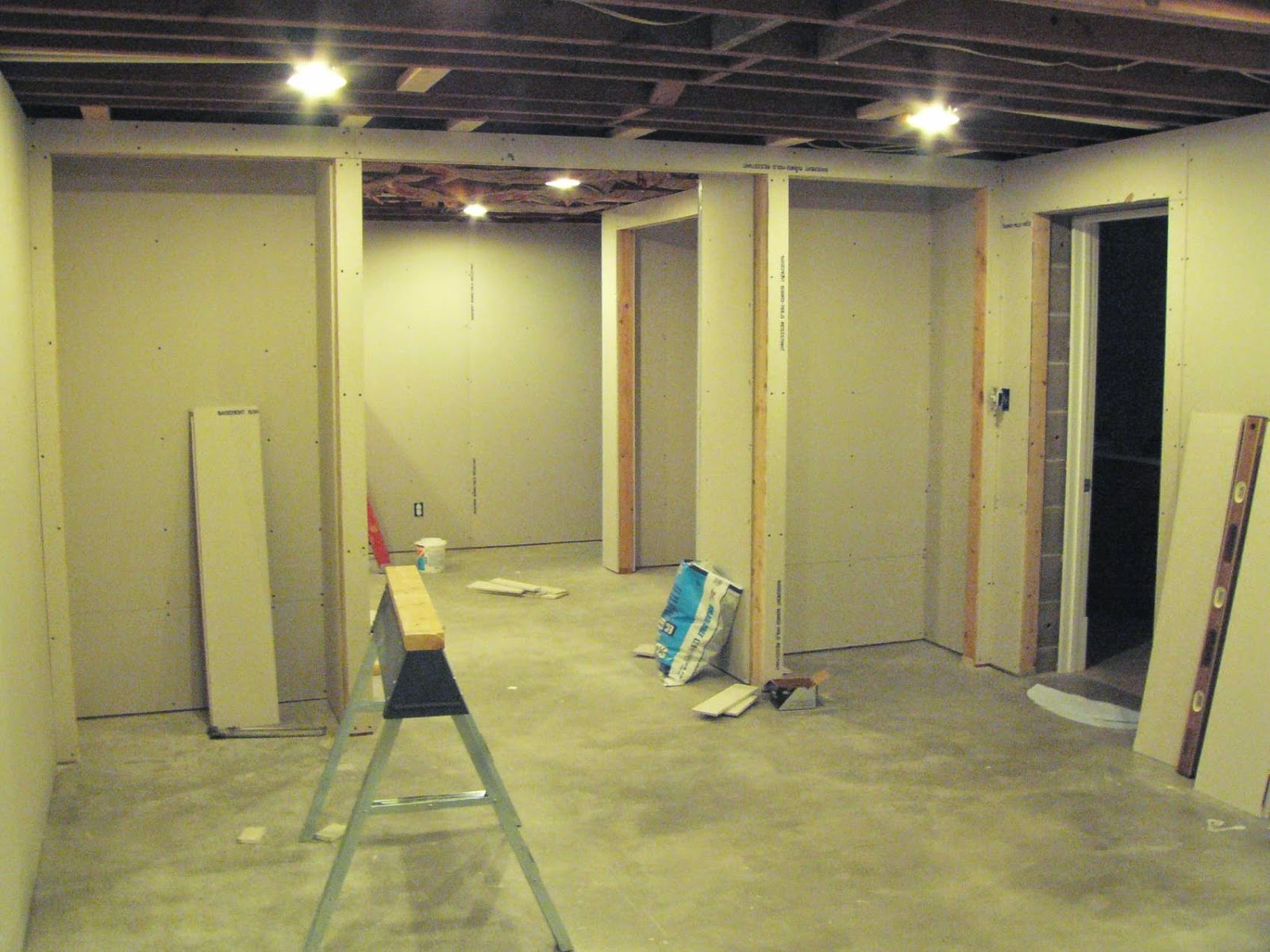 In this view of the family room closets, almost all the pieces were hung and waiting for the mudding to begin. 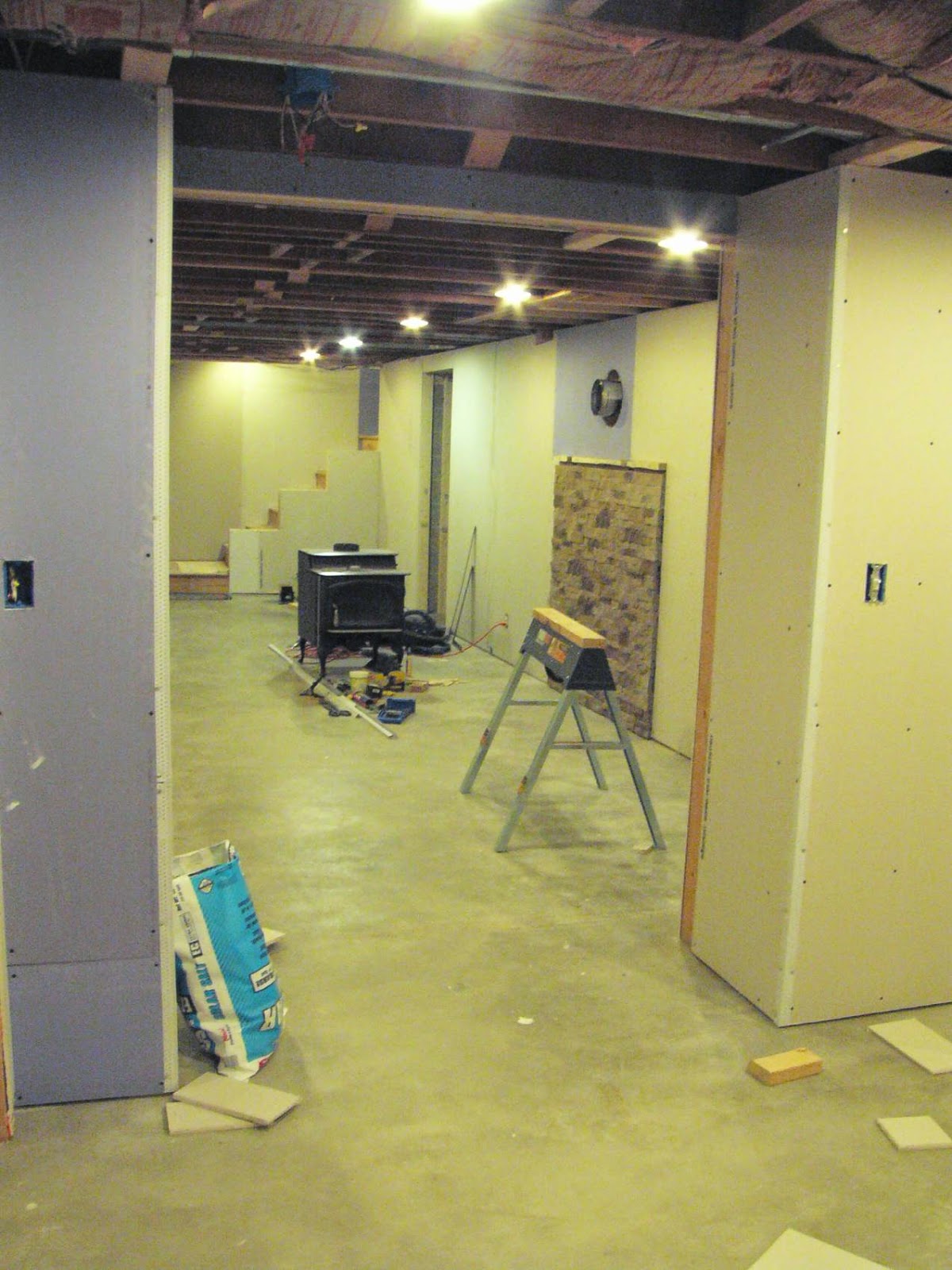 This is the view from the bedroom looking south into the family room. 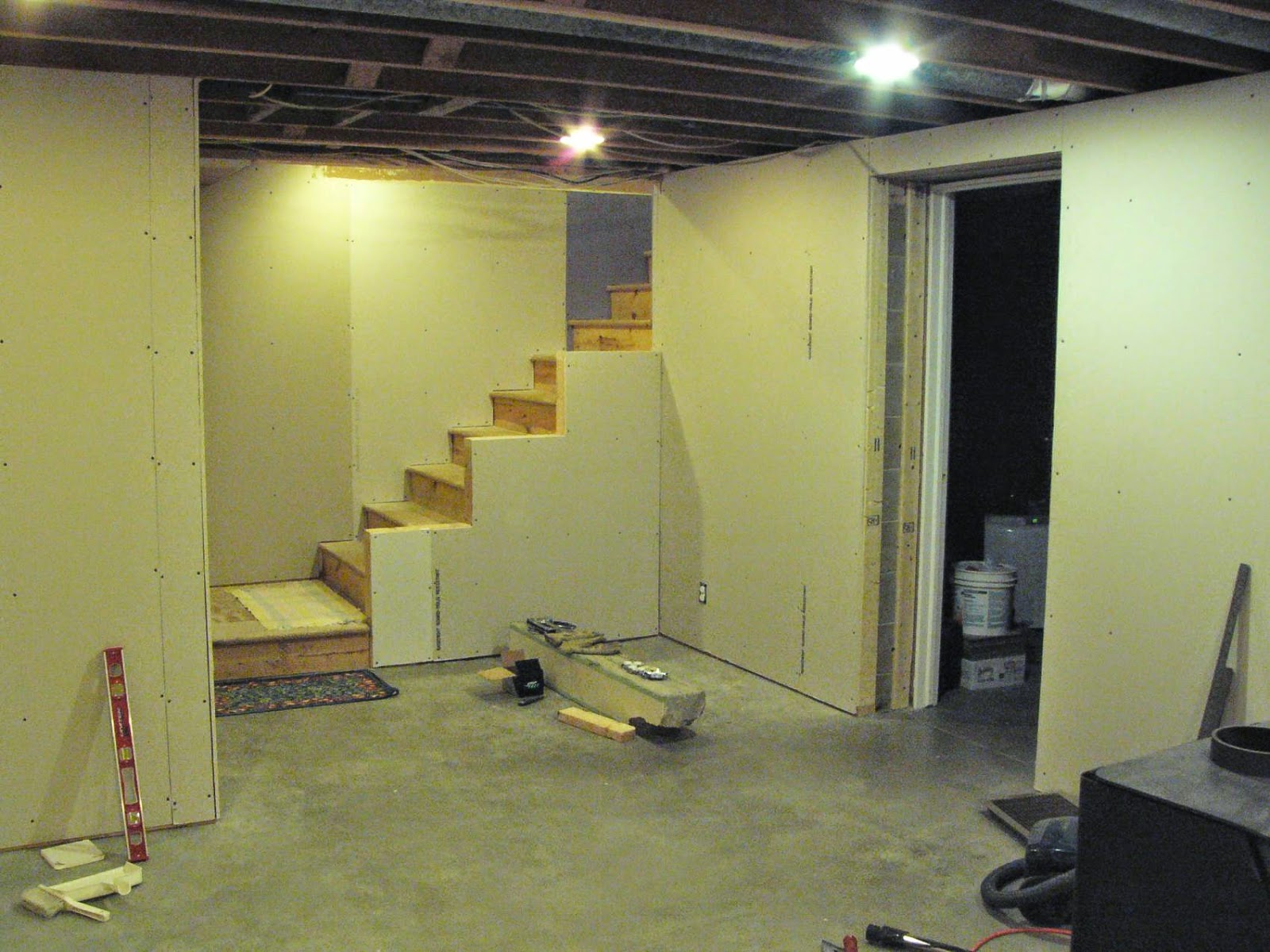 Another view of the stairwell clearly showing drywall pieces in three different colors. 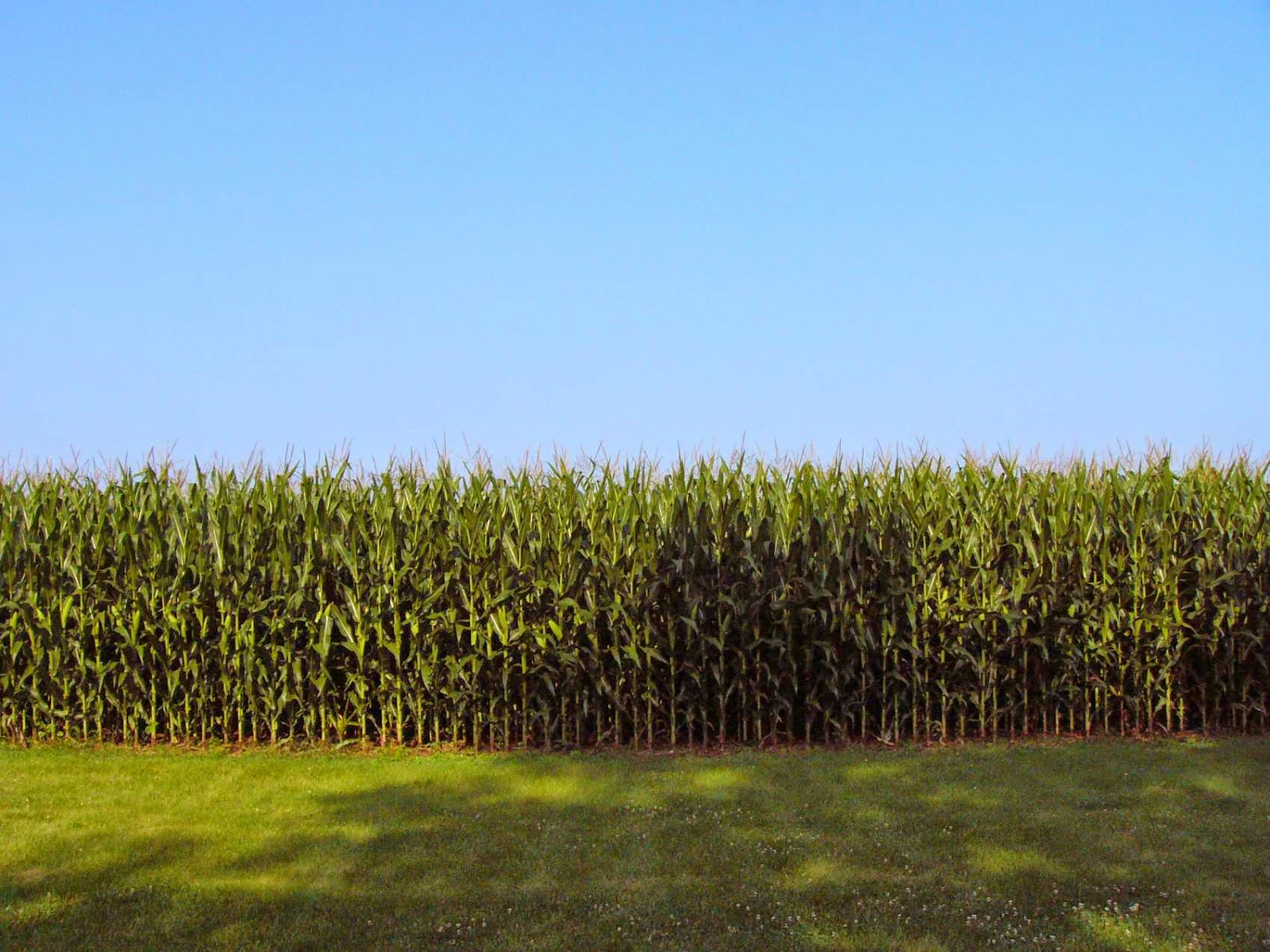 The biggest changes in the crop at this point in the summer are taking place behind the husk leaves of each ear as the kernels mature. 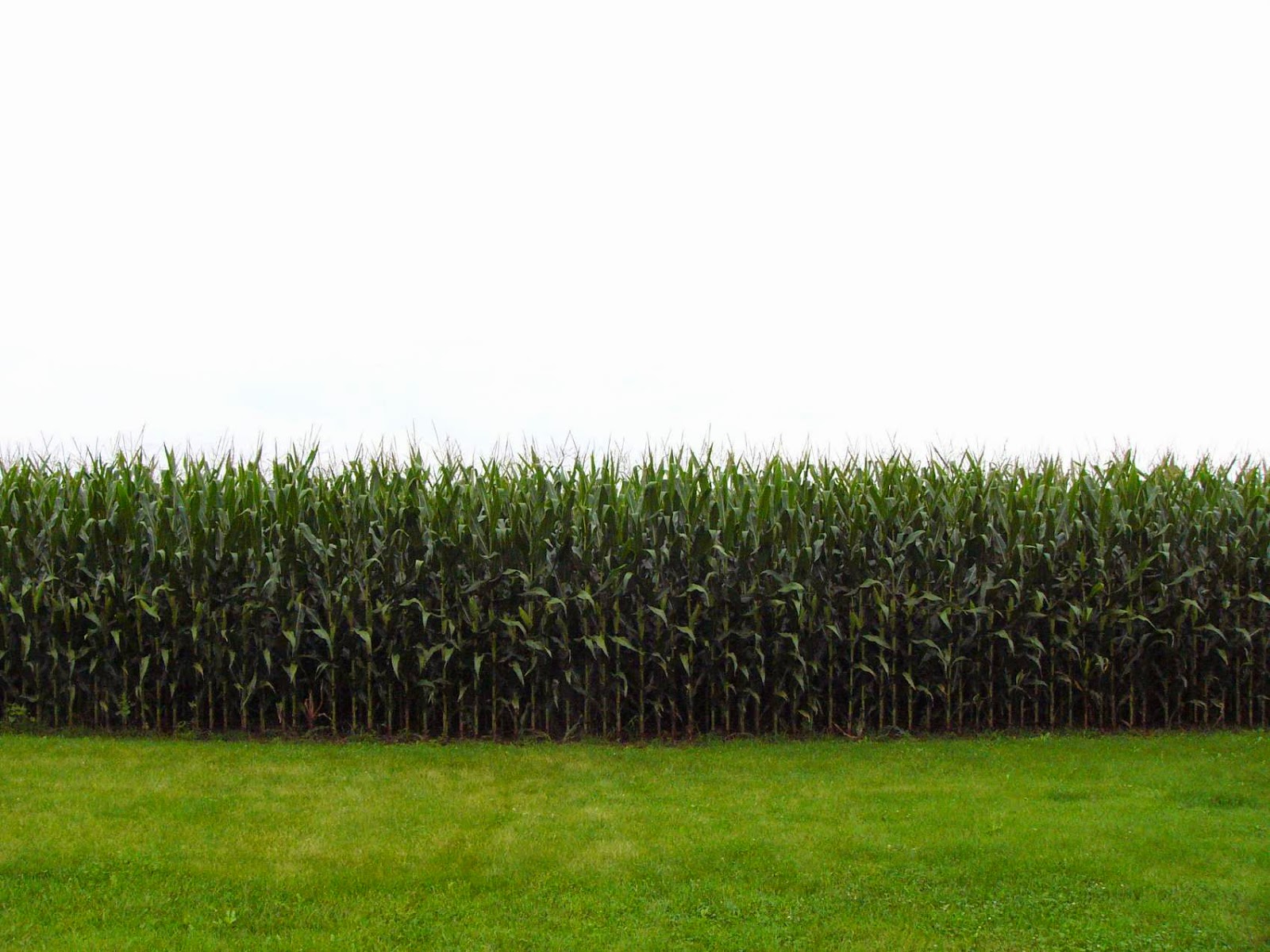 The height of the stalk reached its maximum about four weeks before this photo, so our attention has been drawn to formation of the ears. 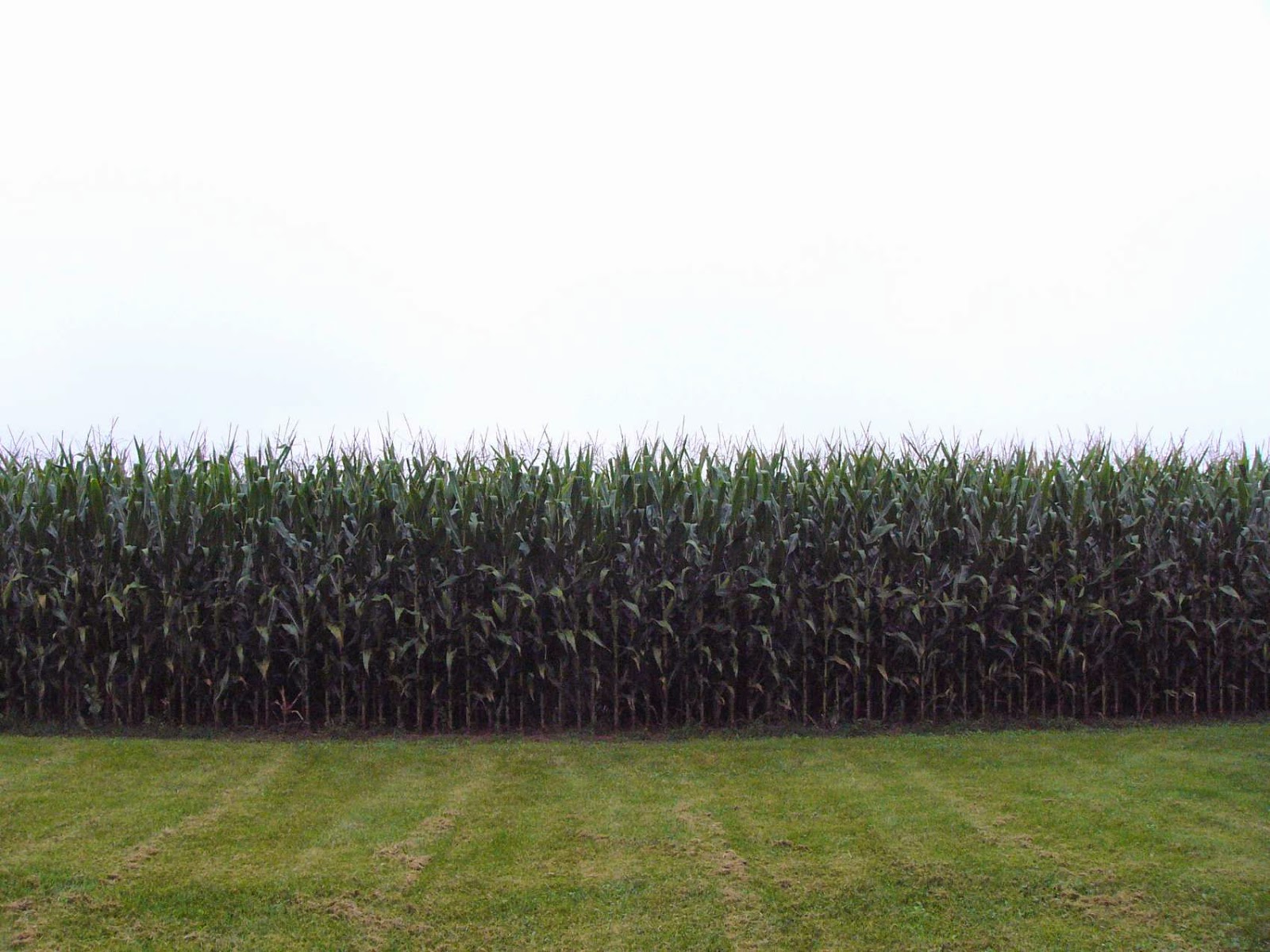 I also watch for stalk and leaf drying since the plant typically dries as the kernels are drying. 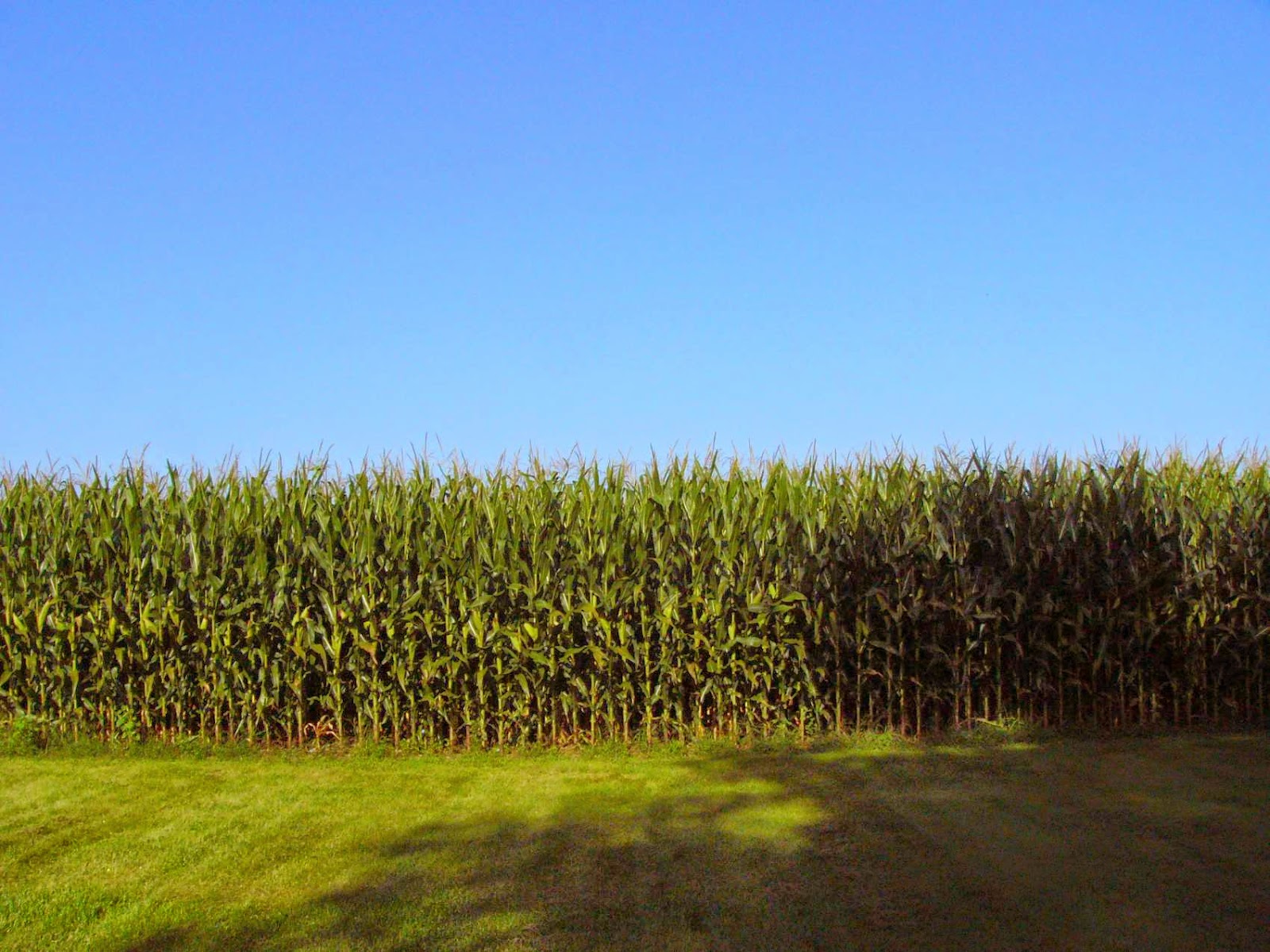 By the 16th week, some stalk drying was visible, but less than I expected.  Referencing photos from previous years convinced me that the drying rate at 16 weeks wasn't much different than most years. 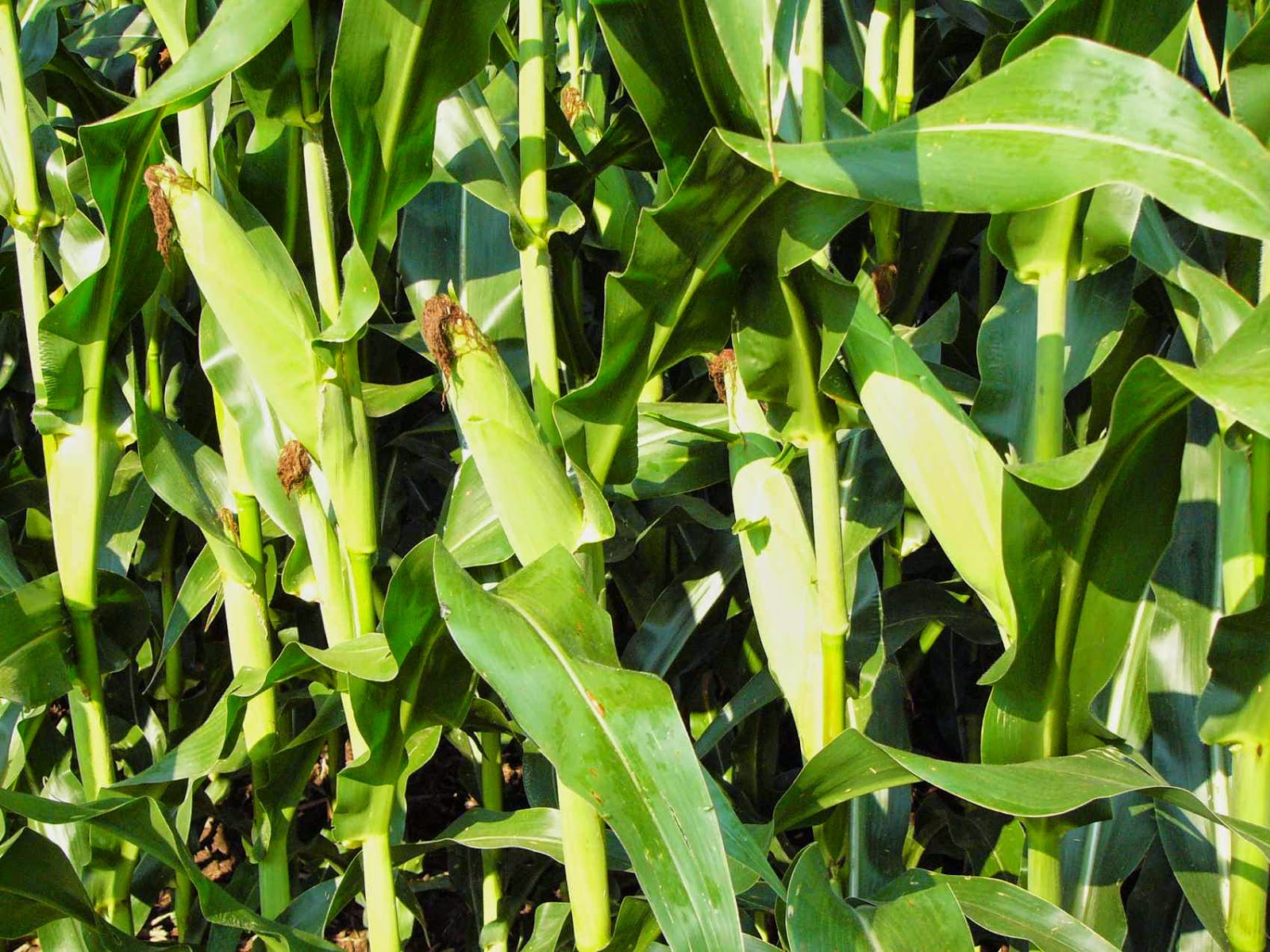 Zooming in on where the action is, the ears appeared close to full size on August 3, but weren't showing signs of drying yet.  Growing degree days were 11% fewer than normal for the week. 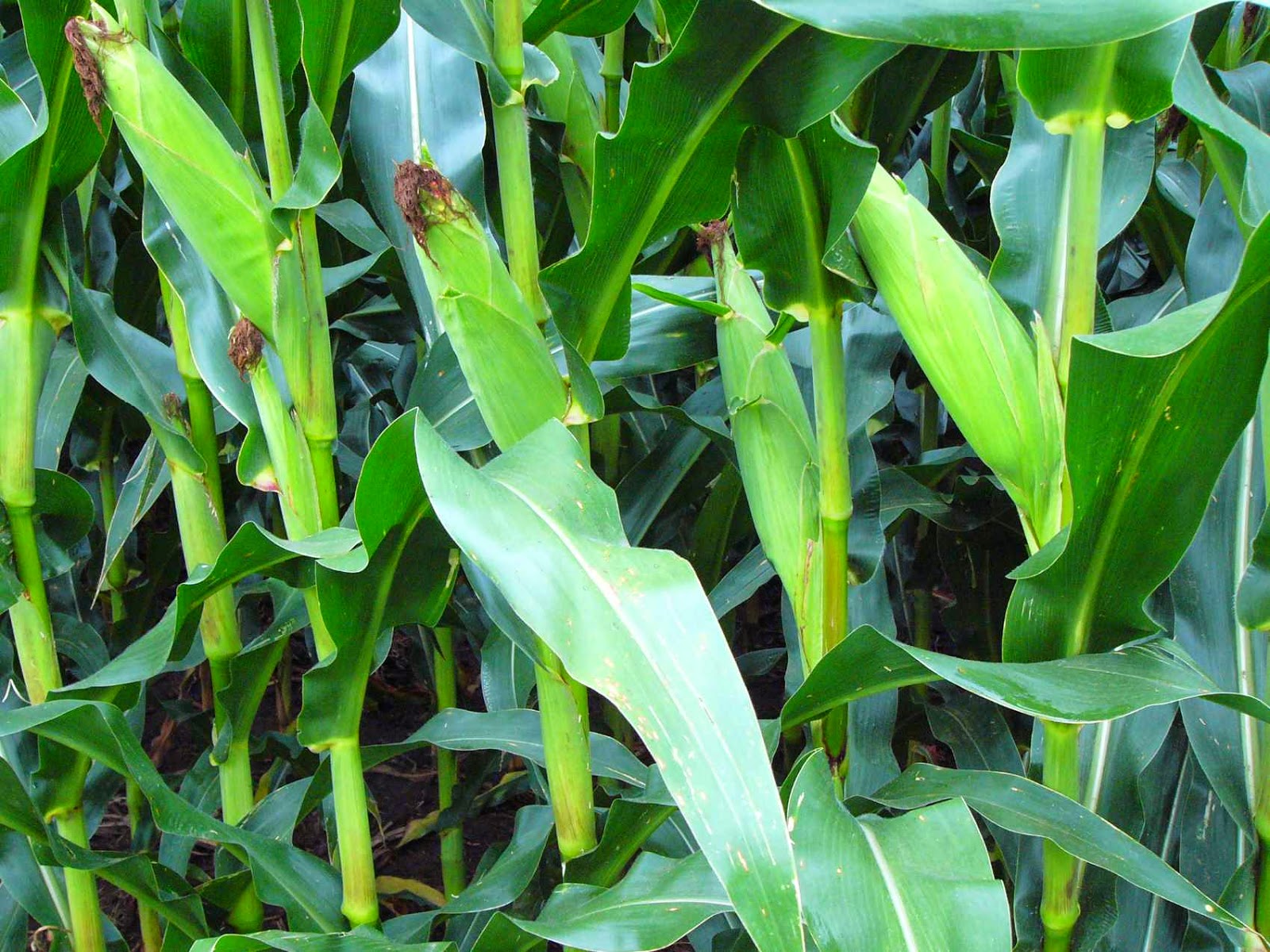 Not much change in the appearance of the ears this week, and the number of growing degree days for the week was only one unit off the historical average. 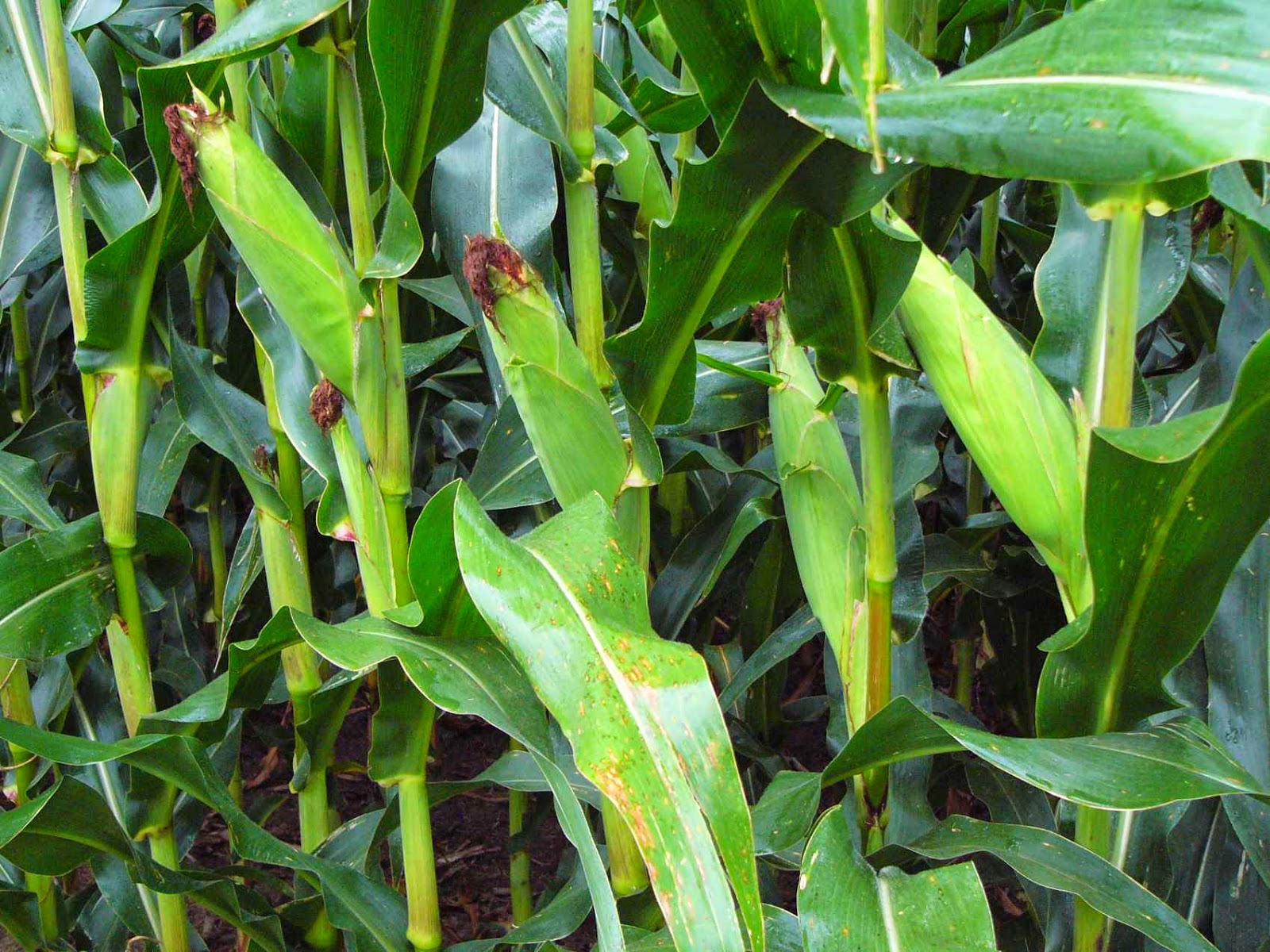 The week of August 17 showed more signs of stalk and ear drying even though growing degree days were 7% fewer than normal. 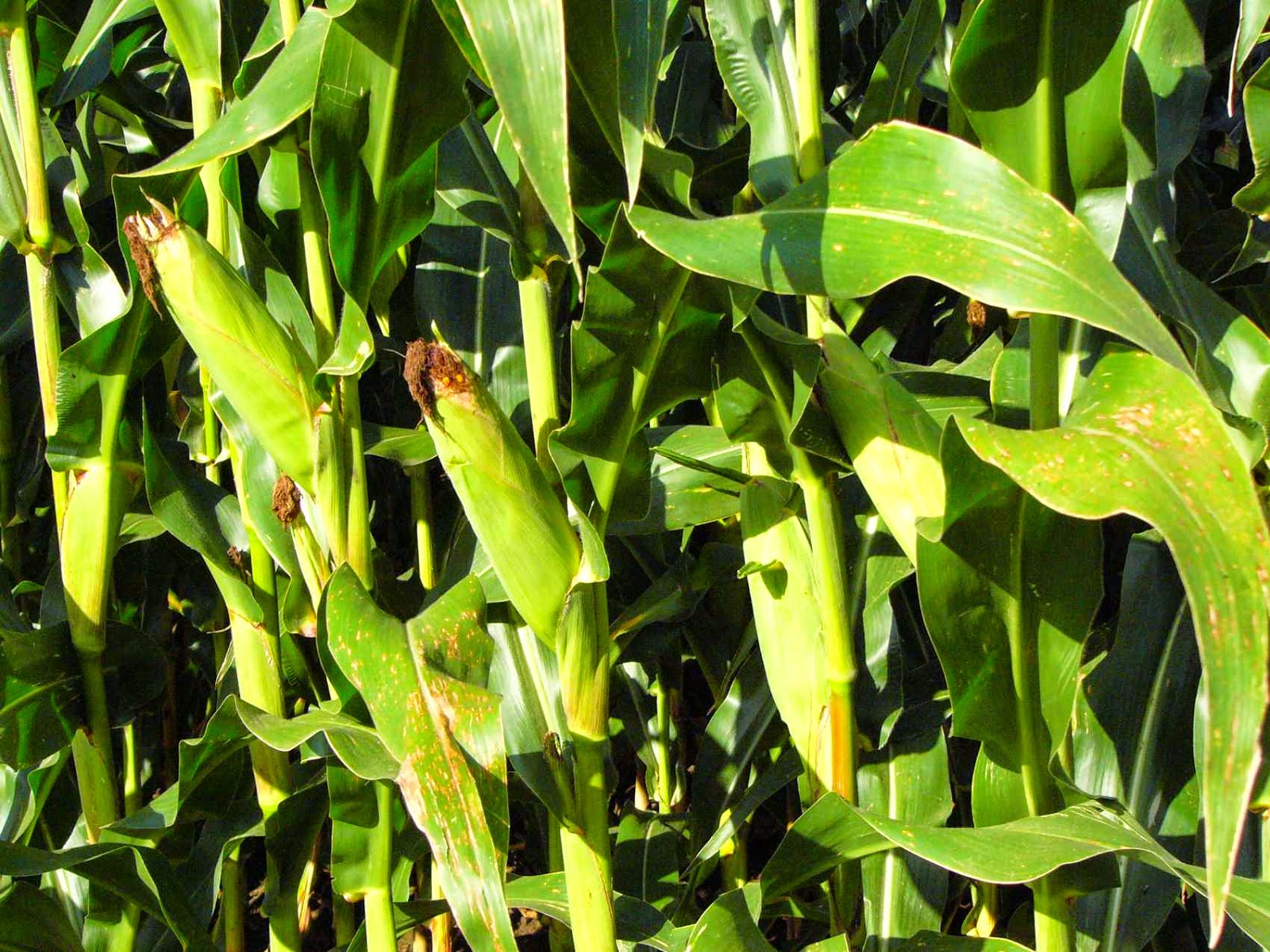 By week 16, some of the husk leaves were pulling away to reveal beautiful kernels beneath, but those that were visible were obviously not fully mature.  Unseasonably warm weather during that week produced 28% more heating degree days than average, and the plants appeared to accelerate their drying.  As long as there are plants in the field, we'll keep reporting more progress toward harvest!

You may have noticed in a previous photo that our basement has concrete blocks both on the outside walls and for the bearing wall separating the east and west sections.  The basement remodel project in our previous home convinced us that lining the exterior walls with 2x4 studs and insulating those walls made for a very comfortable space all year round.  This post details some of the framing and insulating necessary to define our new rooms. 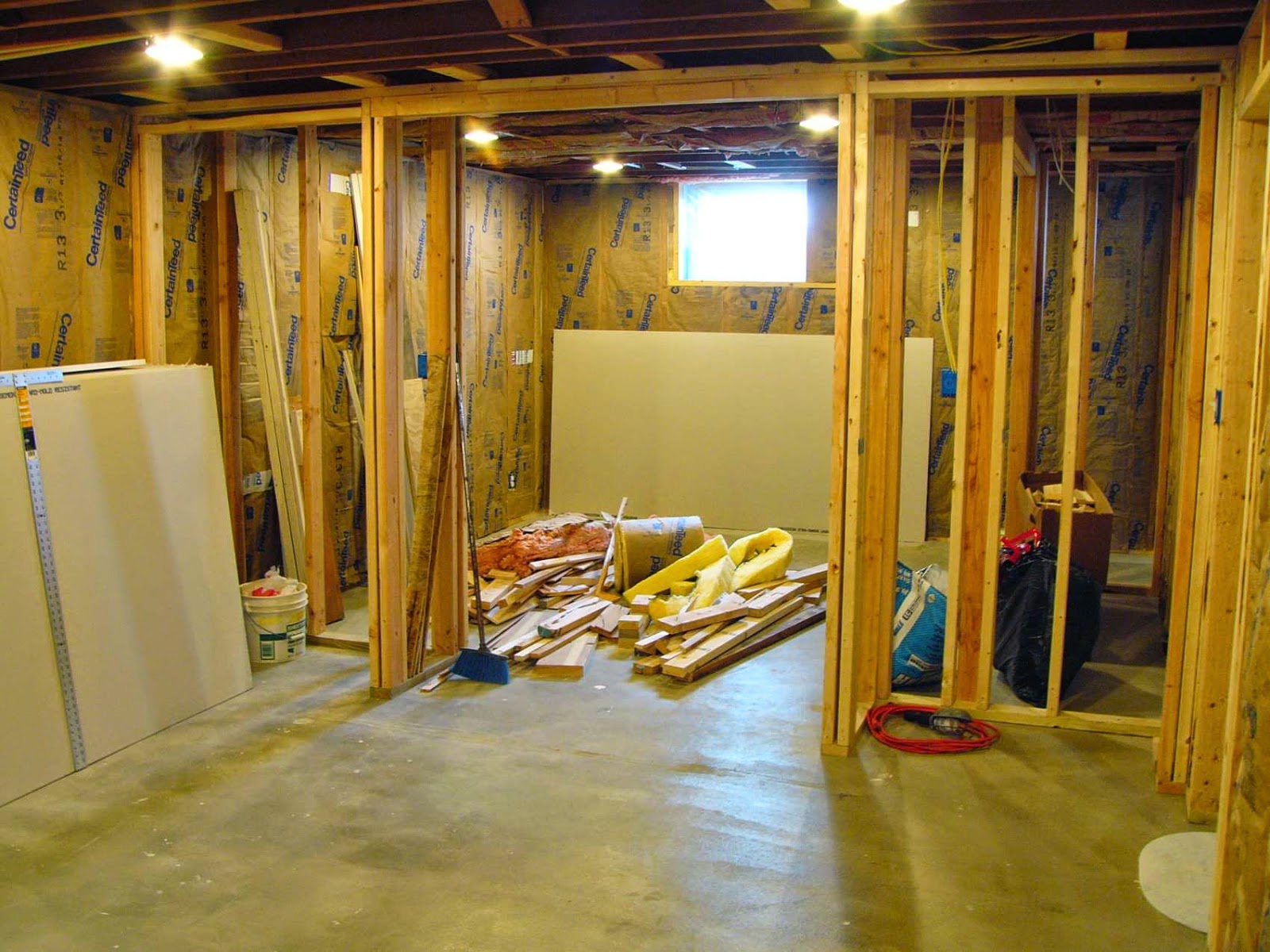 This wide door opening leads to the guest bedroom at the north end of the space.  A five-foot wide french door will occupy that opening so the doors can be opened to allow natural light into the south family room from the largest window in the basement.  The two spaces on either side of the door opening are closets that open into the family room.  At the time of this photo, the framing and insulating were complete, and drywall panels were just moved to the basement and were ready to be hung. 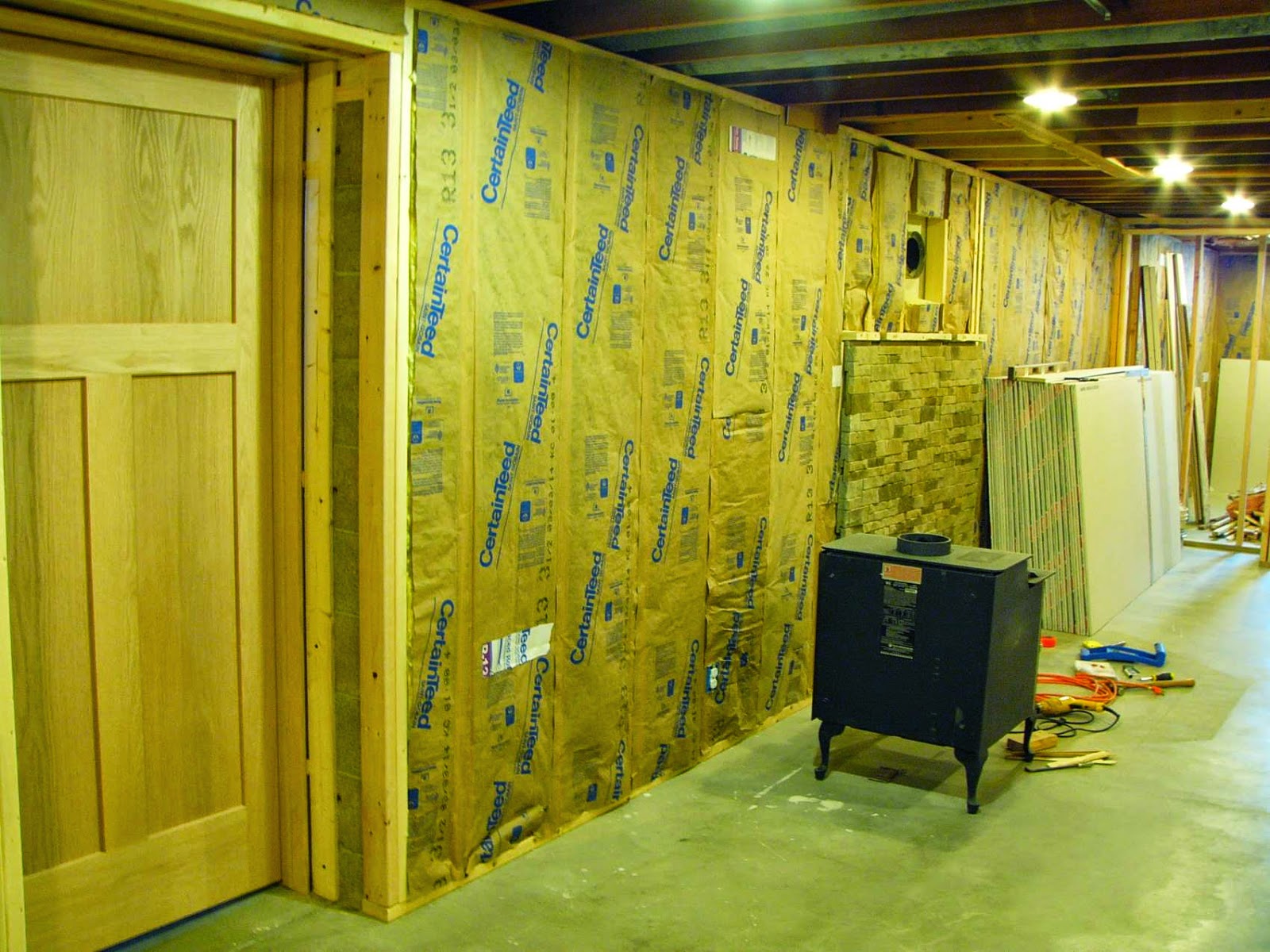 The door at the far left is the one that was featured in a previous post and one can see the wood burner and the stone wall that defines that appliance's spot in the room just this side of the drywall collection.  I hope to include more details on the wood burner's new surroundings in a future post. The thickness of the block bearing wall is also apparent in the door opening. 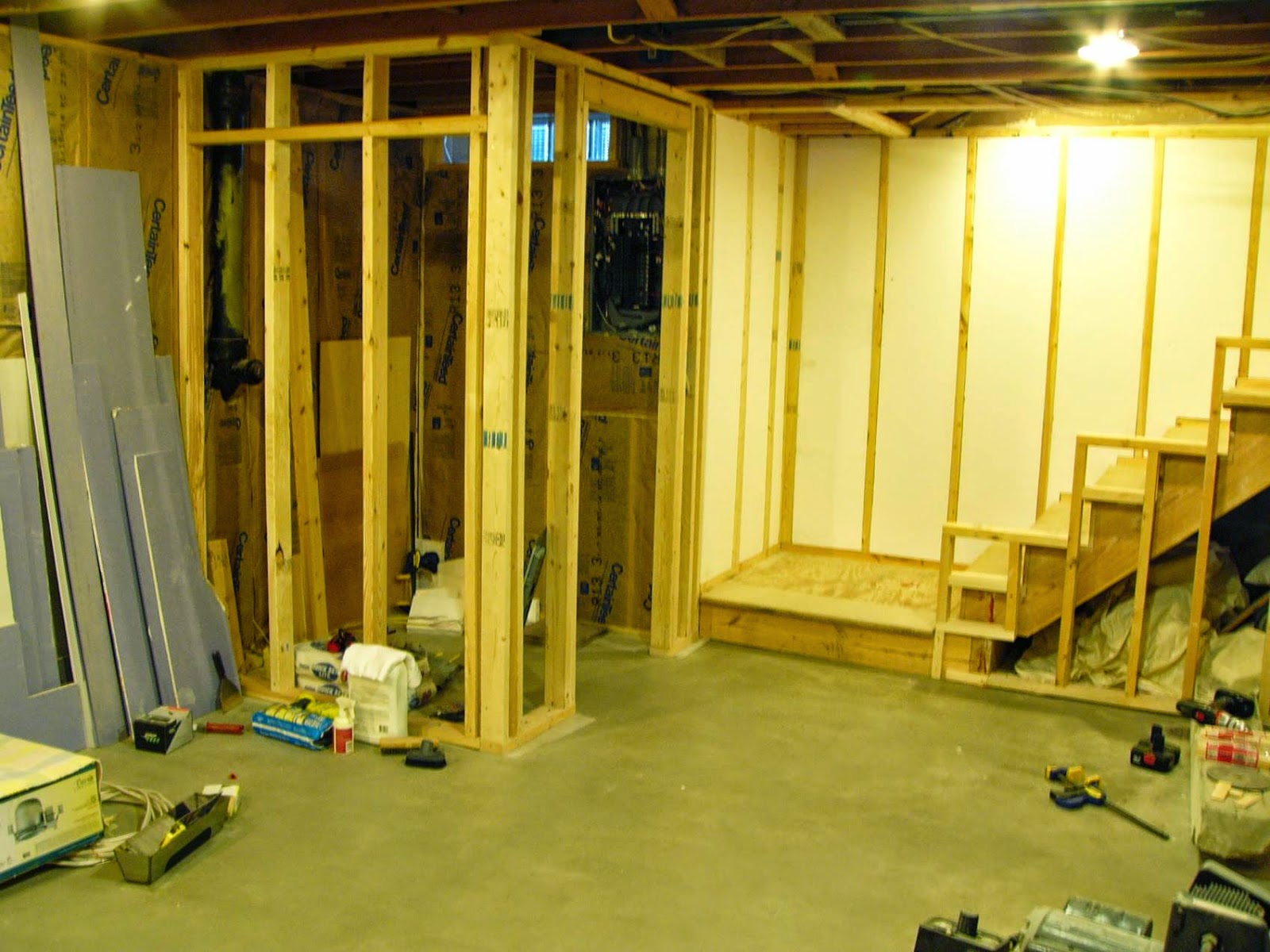 The southeast corner of the family room is home to the electrical panel and a waste water pipe that runs down the exterior wall before going through it to the septic tank in the yard. I debated how to hide these two items while leaving them both accessible, so we opted to build this closet in the corner of the room to gain some storage just at the base of the stairs while providing the desired access.

In this photo one can also see the different strategy applied to the exterior walls of the stairwell. I wanted to minimize the space lost to insulation, so these walls received 1.5"x1.5" furring strips with 1.5" foam insulation in between. 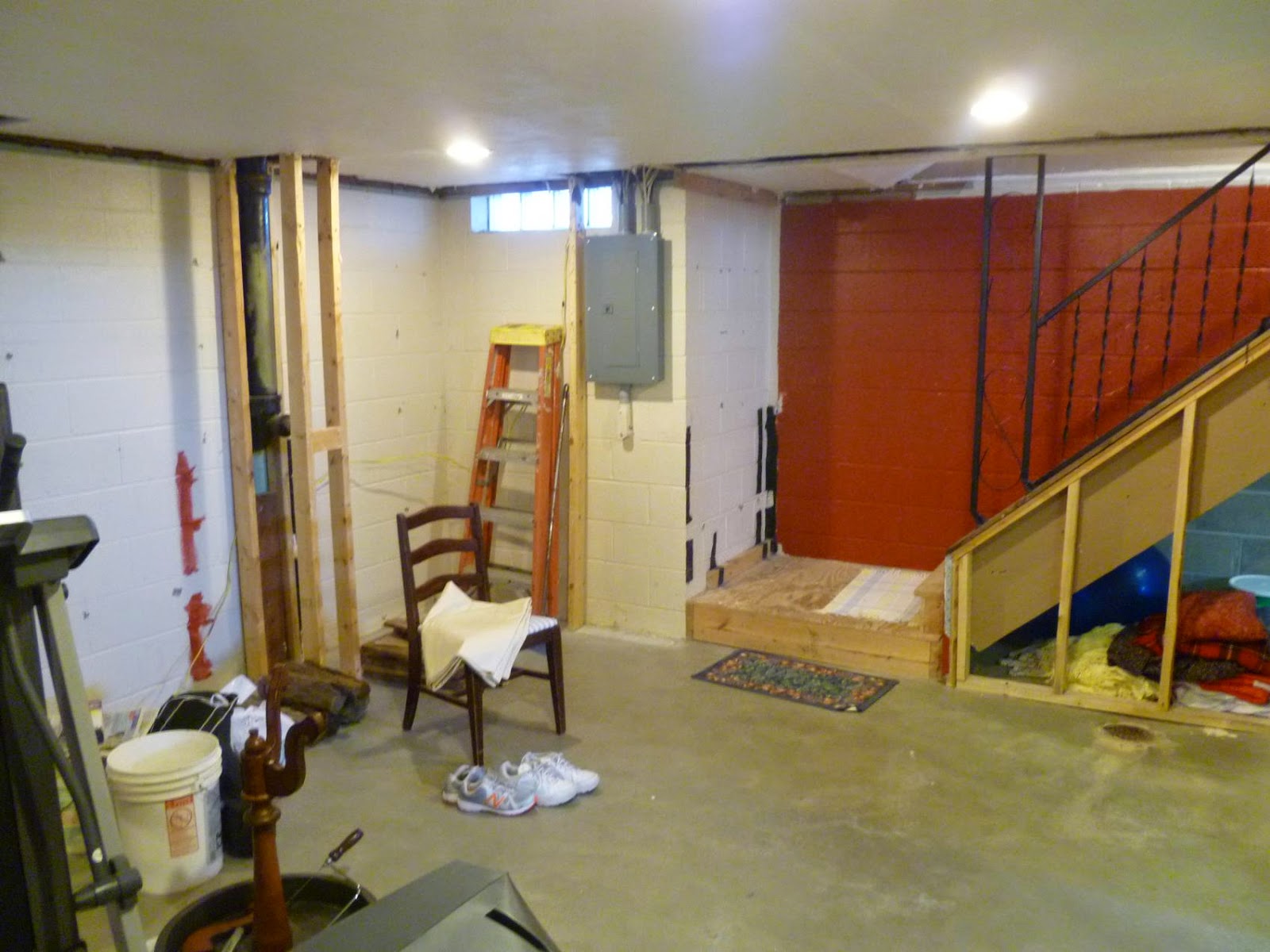 This is how the southeast corner looked before demolition was complete, including framing around the sewage pipe that did not leave access to the clean out port. That and more was removed as part of the demolition. 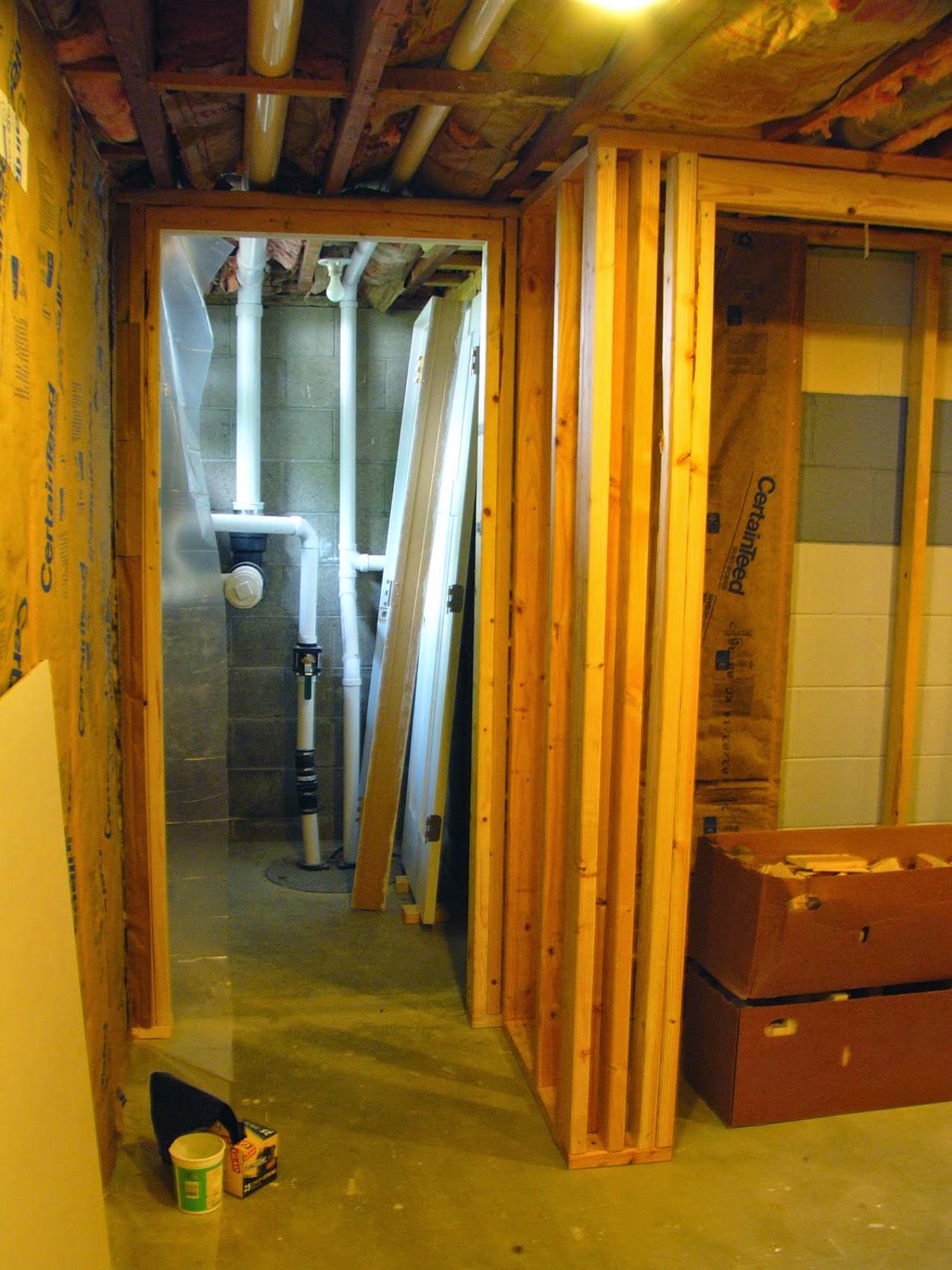 This is the northeast corner of the space looking from the bedroom into the closet that's home to the sewage ejector pump for the bathroom just to the right of that pump.  This door opening was cut in during that bathroom addition project, and doesn't disrupt the bedroom space too badly. 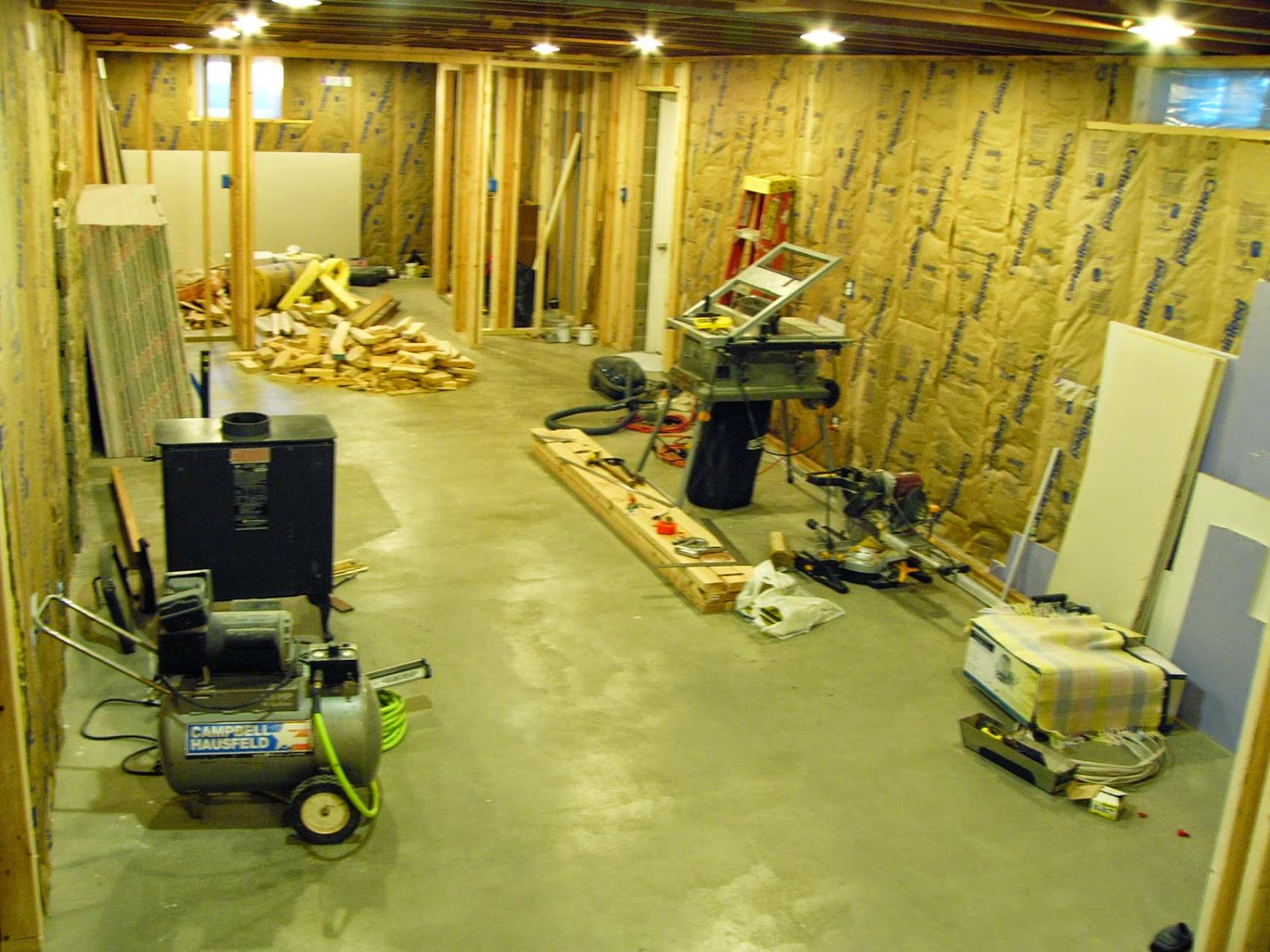 Finally, a shot that's a bit blurry but gives one a good view of the family room from the stairwell. A lot had already happened by this point: framing, wiring, moving and adding lights, reconfiguring heat runs and returns, building a new masonry wall behind the wood burner, etc., but more was yet to be done.