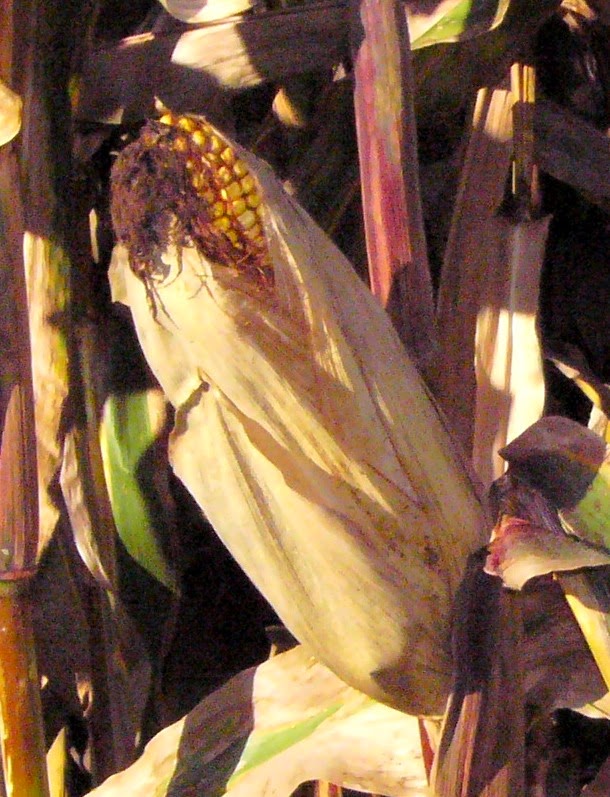 Farmer Wagenbach informed me recently that the corn harvest in the field behind our house was larger this year than ever before.  The yield averaged 258 bushels per acre, which is exceptional no matter where the field is located!  Growing conditions were good this summer, but it's obvious that God has blessed Farmer Wagenbach with a good bit of knowledge and skill when it comes to growing corn!

I can't claim to have invented a better mousetrap, but I'm pretty sure I've found a way to improve the effectiveness of even the cheapest traps.  We first tried this idea about ten years ago when we discovered a mouse had found our candy stash.  That mouse was particularly fond of chocolate, to the extent that he ate all the chocolate of a caramel filled chocolate drop and left the caramel!

Because we didn't have much experience with catching mice then, we baited a trap with peanut butter and hoped for the best.  The next morning I found the trap still cocked but the peanut butter licked clean off the trigger.  Since the mouse was obviously attracted to candy, we decided to bait the trap with some chocolate instead of peanut butter.  It was also obvious that this mouse could be gentle enough with the bait to be able to steal it without disturbing the trigger.  So we devised a plan to make it more difficult to get away with the bait without springing the trap: we glued an M&M candy to the trigger with hot craft glue.  The results were most satisfying.  Not only did we catch the mouse, but he left teeth marks on the candy to prove he was in the act of trying to wrestle it off the trap. 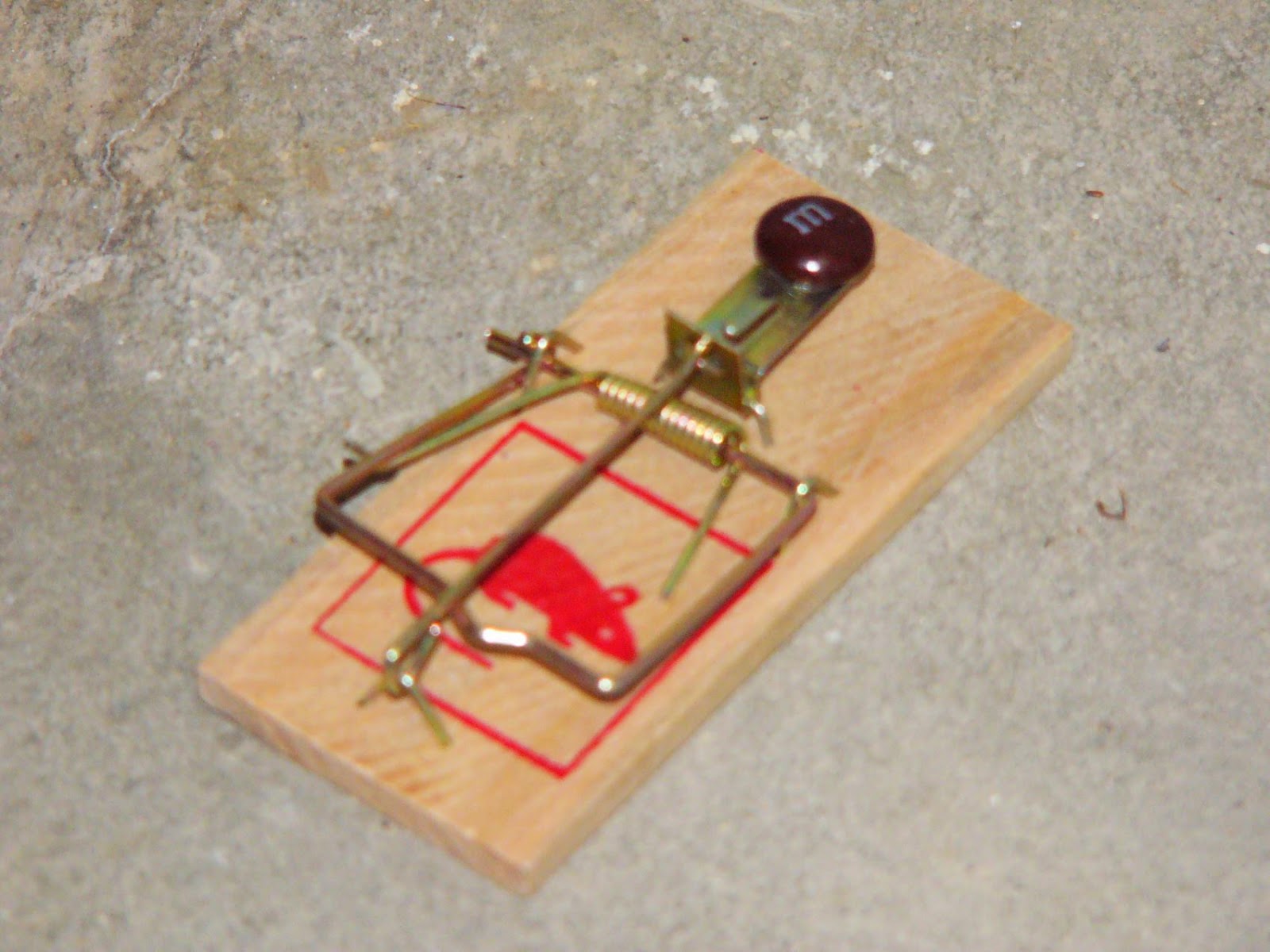 About ten years have passed since we last had the need to set a mouse trap out, but we found evidence this week that convinced us we had at least one unwanted guest.  Unfortunately, we didn't have any M&M candies in the house, so we initially had to try a different strategy.  Since M&Ms worked well before, perhaps a chocolate chip glued to the trap would work as well.  We set two traps, baited identically, and found the next morning that the mouse had removed the chocolate chip and left the glue on the trigger undisturbed.  I think the chocolate may have been too oily to adhere to the glue securely.

Still being without M&Ms, we turned back to peanut butter in desperation, but our experience was like that of before: the bait holder was licked clean by the next day while the traps sat cocked and ready.  After finally acquiring the right candy, we were able to bait and set both traps like that pictured above. 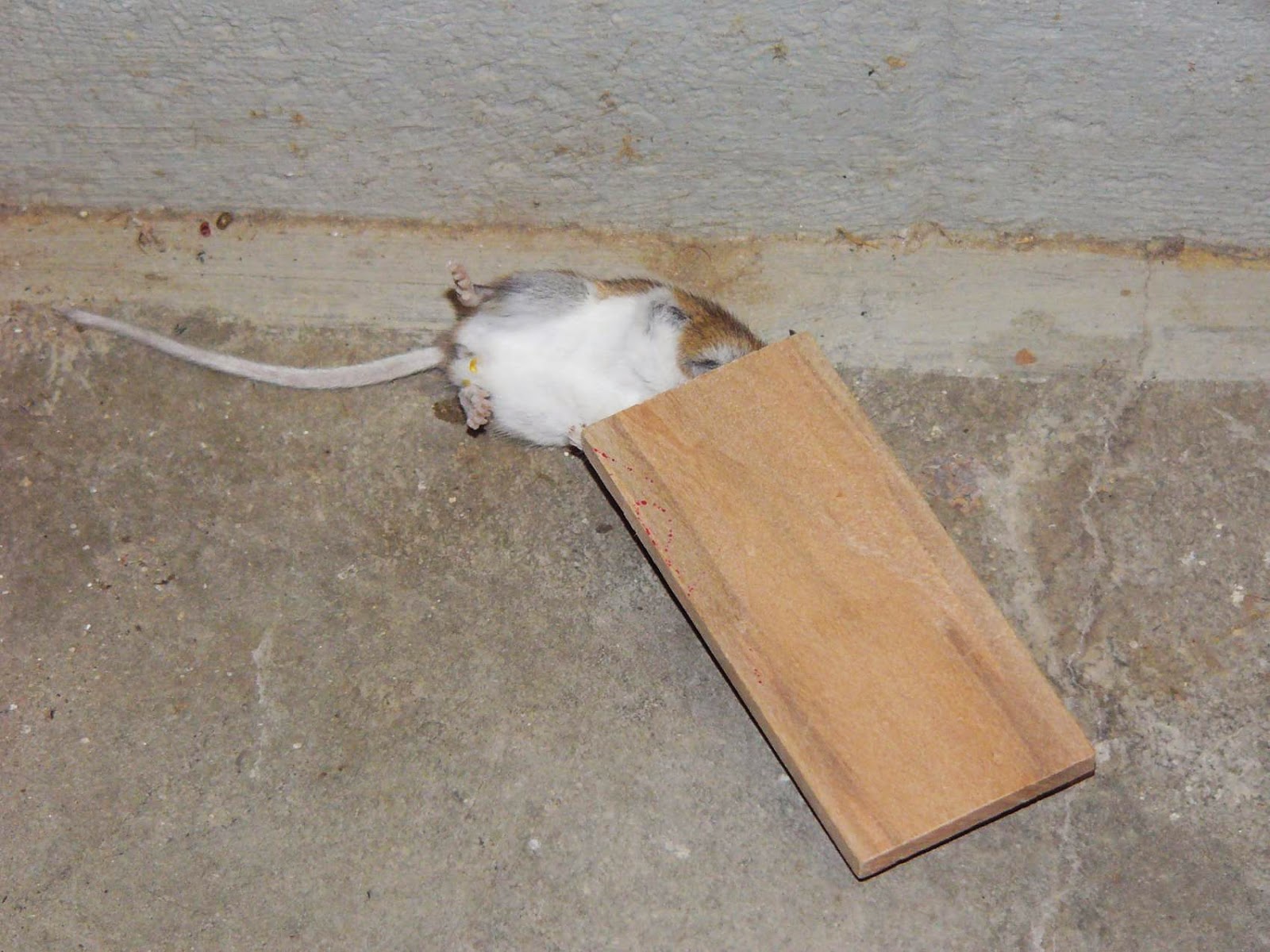 To my satisfaction, the bait worked again!  In fact, both traps contained victims after the first night.  One only managed to lick the "m" off the candy before he tripped the trigger, while the other was able to break the candy shell, but gave his life in the effort.

By our experience, we were able to reuse the bait two times out of three, but even if one has to glue an new candy on the trap for each victim, that seems a small price to pay for a solution so effective.  If you've had trouble with mice stealing your bait without getting caught, I encourage you to try this method!