I've been waiting for the perfect sunset this fall, so I could photograph it and enjoy it indefinitely. Alas, you won't find that image in this post, as the sunsets that I would rate even more beautiful than these were enjoyed without my camera at my side. I'll keep my eyes open and camera handy for the rest of this fall and winter, but for now I hope these will suffice. 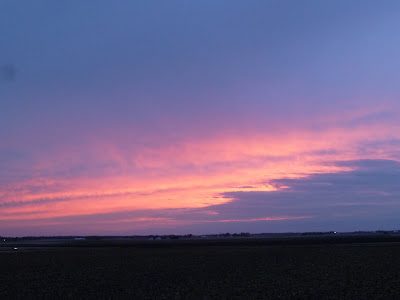 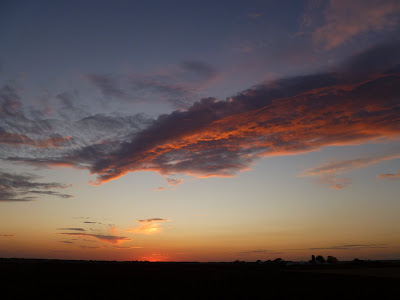 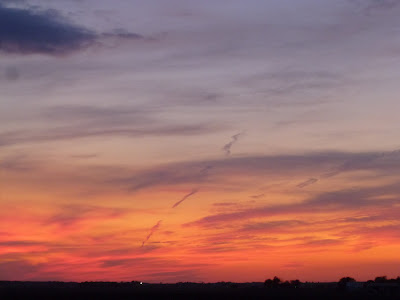 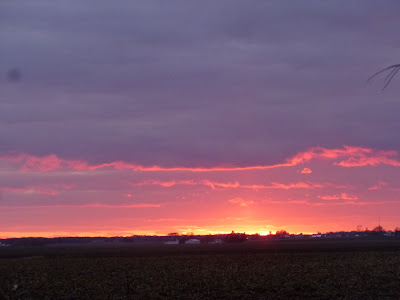 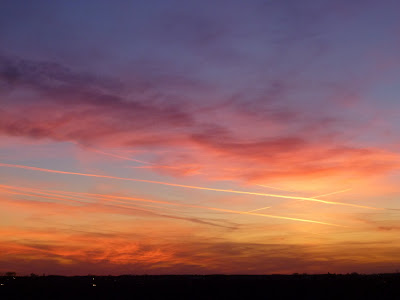 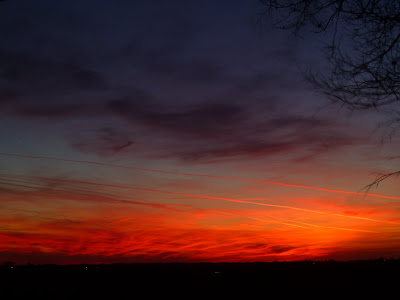 It's hard to believe that Construction update #37 was over a year ago, but it is appropriate that this project follows that post from last year.  Just as I had sympathy for my guests last year, my sympathy stretches to another section of the yard this year. 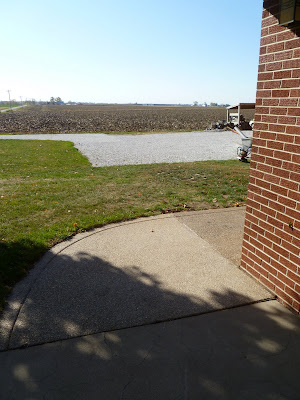 Since the driveway in front of the house is not very big, our visitors occasionally have to park in the parking area to the south of the house.  I think that parking area is much improved over its state four years ago, but the trip to the house still required either a detour to the path by the barn, or a saunter over the lawn.  Most of our visitors chose the saunter.  Since we sometimes have damp ground when friends come to visit, I felt bad that their trip to the house was less than ideal.  So one Saturday in late October I decided to do something about it. 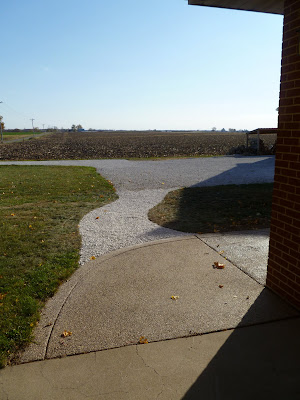 After a few hours of moving dirt and gravel, the trip to the house suddenly looks a bit more civilized.  Note the curve of the path, intended to provide our guests with an idyllic stroll to the front of the house. 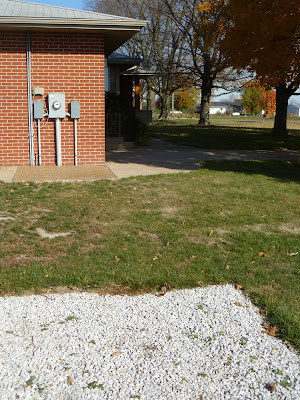 Looking back at the house from the parking area, it's not hard to imagine why our guests were sometimes in a quandary about how to gracefully reach the front door. 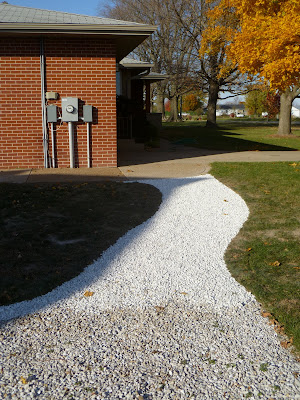 Now the path to the front door should be obvious to even the most obtuse, and above all, I hope it says, "Welcome to our home!"
Posted by Mr. Riggenbach at 9:31:00 PM 3 comments: Links to this post

In case you couldn't tell, I'm seldom impulsive.  I view pouring concrete as a fairly permanent action that one undertakes only after one is sure he won't want to reverse that action.  Since I've got several conduits under this section of sidewalk that was removed three years ago, I've been hesitant to bury them "permanently" until I was sure everything was installed in this area that we intend to install.  The inconvenience of not having this section of sidewalk finally outweighed my reluctance to commit to concrete. 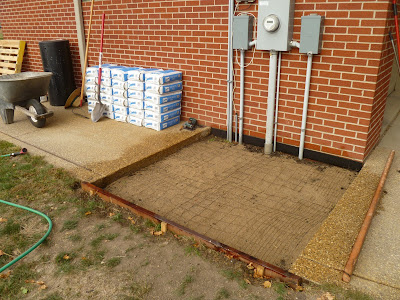 There was some uncertainty in calculating the depth of the section, so I figured I might need slightly more than a half yard of cement.  I purchased thirty bags of mix and hoped I'd have a few left over.  Did I mention I've never done concrete finishing before?  I've seen others do it, but I definitely don't have "the touch" that would have made this job much less stressful.  However, none of those facts prevent an engineer like myself from believing he is capable of accomplishing just about anything. 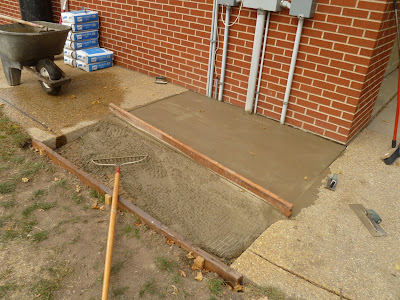 Most of the internet advice I read recommended a motorized mixer for this much cement, but the hand mixing went a little faster than I anticipated, and wasn't as tiring as I feared.  As you can see in this image of the partially poured section, I was able to level and semi-finish the cement as I went along.  My goal was to match the exposed aggregate finish of the original concrete, so I wasn't too concerned about a perfectly smooth finish since it would be removed eventually to expose the gravel underneath. 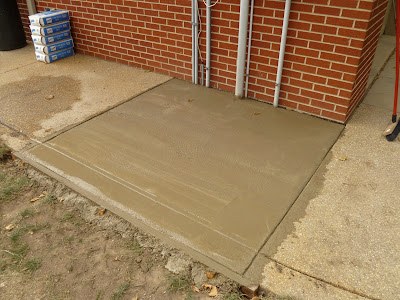 Here's a shot after all the cement is poured and the finishing is almost complete.  The original concrete was treated with a retardant to make it easier to uniformly remove the top surface, so I did the same.  The retardant simply slows the curing of the concrete on the surface to which it's applied, and its depth of penetration is inversely proportional to the amount of time the concrete is allowed to set before the retardant is applied.  In my case, there was a significant time difference between when the concrete next to the building was poured compared to the last bit by the yard.  Since I'd been warned not to apply the retardant too early, I applied it in sections starting at the house so the section nearest the yard could set a bit before it was exposed to the retardant.  Even so, I think I should have waited longer.

Unfortunately, I don't have photos of the removal of the top layer.  After waiting a couple hours, I used a light spray of water and a plastic brush to gingerly remove the concrete while trying not to disturb the gravel underneath.  It didn't take long before I brushed too hard in one spot and removed more gravel than I desired.  Having learned that lesson, I tried to be more careful on the remaining areas and felt pretty good about the result.  Twenty four hours later, I used a light spray of water to rinse off the gravel that was no longer attached to the concrete and gradually increased the intensity of the spray to do a more vigorous cleaning.  Mistake.  The retardant was evidently still effective on some of the later concrete, so the water jet created a few more pock marks where the exposed aggregate had been curing nicely.  Even after reading several warnings not to be too aggressive in removing the concrete, I had to learn the hard way how aggressive was too aggressive. 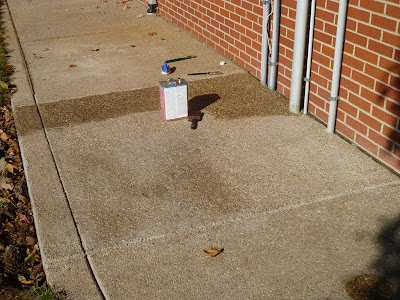 A couple weeks later, the concrete was ready for cleaning and sealing.  Instead of muriatic acid, I used Krud Kutter Concrete Clean & Etch which is supposed to be a safer cleaning alternative.  I found the product cleaned the new concrete well after I learned to rinse the concrete quickly after cleaning.  The photo above shows the sealing process in progress using a lacquer-based semi-gloss sealant. 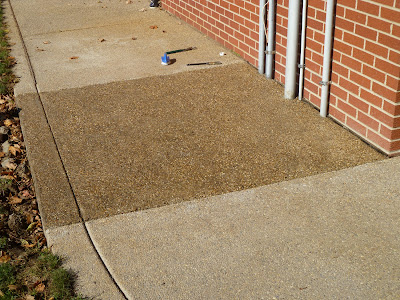 I don't know how critical it was to seal the concrete before winter, but the original concrete had been sealed soon after it was poured, so I tried to follow suit.  In the end, the finished product is not as perfect as I hoped, but it is functional, and looks pretty good from about 100 feet.
Posted by Mr. Riggenbach at 10:30:00 PM 6 comments: Links to this post