At the end of the last post, I expressed hope that our neighbors had good records since I noticed something in the Google Maps images of our neighborhood that related to their activities. The image below is a wider view of a portion of our neighborhood (images courtesy of Google Maps, copyright 2010) that shows our house at the bottom left and two colored squares that denote the objects of interest. 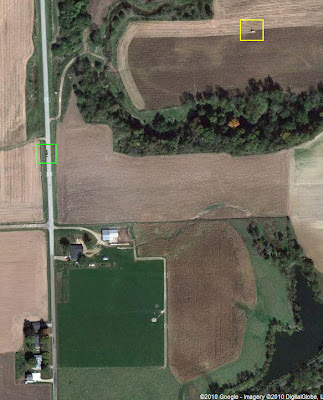 I first noticed the object in the green square on the road, and quickly identified it as belonging to our neighbors. A closer view is shown below. 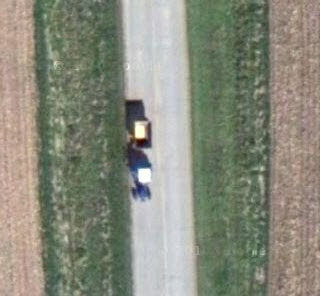 That's our neighbor's blue tractor pulling a grain wagon, that appears to be laden with corn. It's headed back to the grain bin, so the combine is probably not far away. 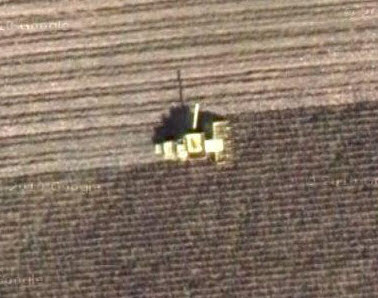 Here's a closer view of what's in the yellow box. Sure enough, that's their yellow combine making its way through the field in the valley. A check of their records indicates that field was harvested on October 5 and 6. In the image, the field appears to be less than half harvested, and the shadows seem to mark the time of day slightly before noon, so my neighbor's comment on the previous post that the image was taken at 11:03 AM on October 5th is probably as close as we'll get. With that knowledge, I think we can all sleep soundly now.
Posted by Mr. Riggenbach at 11:35:00 AM 2 comments:

Deductions on the Google map challenge

Several readers have submitted insightful speculations on the date of the aerial photo currently describing our home on Google Maps. Since many of you probably don't know our yard as intimately as I do, I'll share my observations so we can try to narrow the photo date as closely as possible.

The "A" in the photo below identifies the teeter totter, which according to a previous post was placed into service on September 17. Unfortunately, I'm not able to tell from this image whether the upper level of the pivot is complete or not. On to the next clue. 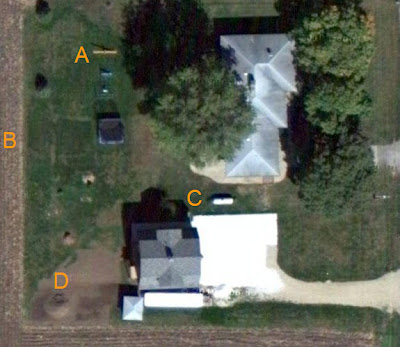 The "B" on the left side of the photo designates the approximate location in the field that serves as our corn-measuring spot. Apparent in this photo, and even more apparent if you zoom out to see more of the cornfield, is the fact that the field has been harvested, and tilled. We know from another post that harvest happened on September 7 (which doesn't narrow the satellite image date), but we haven't noted in the blog when the tilling took place. We do, however, have a post about the second crop of corn that grew this fall, and a photo from September 27 that shows the field untilled. That helps, and we can narrow the photo to sometime between September 27 and December 16 when we first posted the Google Map image.

Moving on to item "C." Some readers noticed the absence of the gravel path from the house to the barn as described in another post. That post was dated November 11, but I know that the path was built the previous Saturday, November 6. That narrows the image down to about a 40-day window, Sep 27 to Nov 6, but I think we can do better than that.

Area "D" on the image locates a bare-dirt section of the yard that I tilled the same day Farmer Wagenbach tilled the big field next to us. As I recall, that was October 2. That day I was able to sow a bit of the grass seed on the south end of the dirt patch and immediately watered only that section. Over the next week, I eventually sowed all the grass seed, and began watering the entire patch. The Google Maps image appears to show damp earth only on the south end of the patch, so I think the image must have been taken sometime in that first full week of October, and at the latest, sometime in the second week. That's the best I can do with the data I have right now, but if my neighbors have good records, we might be able to narrow the date further. If so, you'll be the first to know!
Posted by Mr. Riggenbach at 12:50:00 PM 5 comments: 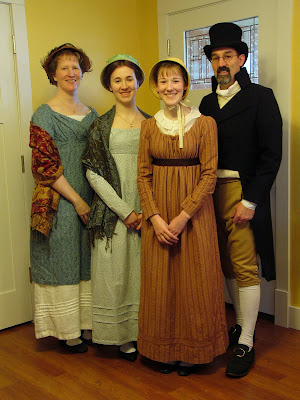 Blessings from the Riggenbach Family 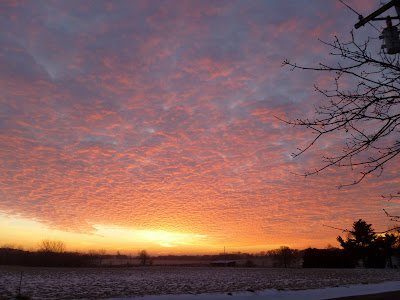 Email ThisBlogThis!Share to TwitterShare to FacebookShare to Pinterest
Labels: sunrise/sunset

Google Maps recently updated the image of our neighborhood as you can see below (image courtesy of Google Maps, copyright 2010, of course). A few things grabbed my attention as I looked at the image, such that I began to wonder if I could pinpoint the day the photo was taken. Can you? 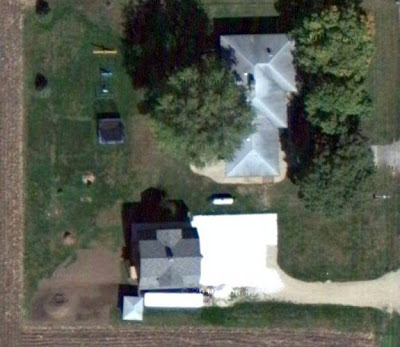 Maybe you'll notice something I didn't, but there should be enough information in the photo and in previous blog posts to narrow the date range considerably. Leave your best guess in the comments area, and if you're familiar with our neighborhood, feel free to look for clues at the neighbor's houses also. Thanks for the help!

More wind than we need

Even though we haven't received a lot of snow, and the wind is only gusting to 40 mph, that's enough to create "white-out" conditions and make us glad we're inside today. On the bright side, the snow fence appears to be doing it's job, and we should have a few nice drifts to play in by the time the storm is done. Here's a short video of the snow in the backyard at 11:32 this morning (which might be more entertaining in full screen mode on YouTube):


If you listen closely, you can hear "God Rest Ye Merry Gentlemen" in the background.
Posted by Mr. Riggenbach at 12:14:00 PM 6 comments: