Our last full day in the Historic District for this trip was our warmest yet, and even found the locals complaining about the heat.  As you can see below, we found plenty to keep us busy. 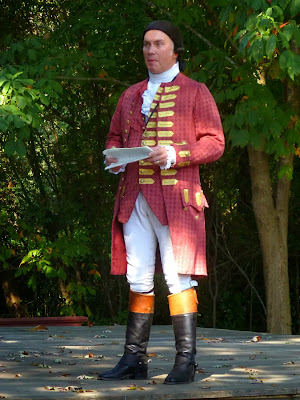 We started the day in the gardens of the Governor's Palace where we found Governor Dunmore in a perturbed mood.  Although he was popular among Virginians early in his service, his loyalty to the British crown later put him at odds with a fair number of the colonists he governed. 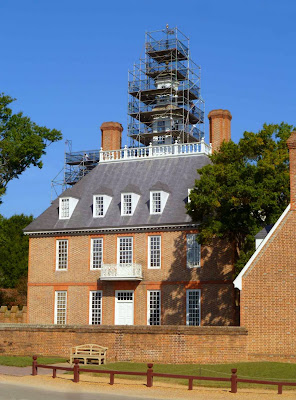 There won't be any grand photos of the Governor's Palace on this trip as the central cupola was undergoing maintenance and covered by scaffolding for the duration of our visit. 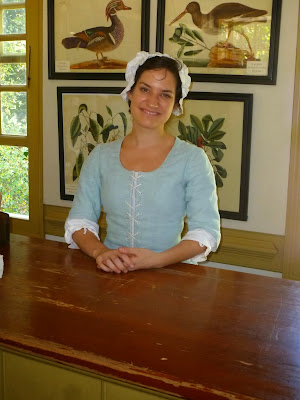 We met this young lady at an English Country Dance on our first evening in town, and were pleased to learn she works as a costumed interpreter in Colonial Williamsburg.  Dara works mainly in retail establishments in the Historic District, and we found her working in the Post Office this day ever ready to meet our shopping or conversational needs.  We'll keep our eyes peeled for her smiling face on future visits. 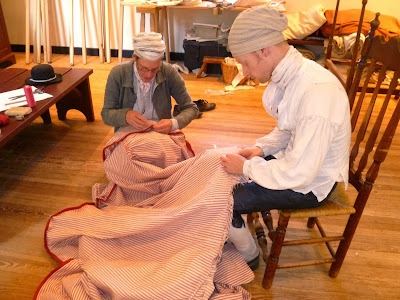 These two gentlemen are working on the tent project mentioned earlier.  The tailors were commissioned to reproduce George Washington's marquee, or camp tent, as the extant article can only be displayed in very controlled conditions.  Mark Hutter hired seven "tent stitchers" to assist with the hand sewing, and although the replica was not ready for display when we visited, it has been displayed since and will be available for visits at the Museum of the American Revolution when that facility is built. 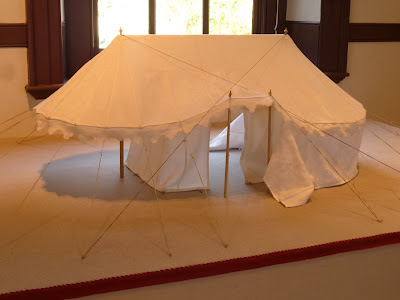 This 1/6 scale model of the tent illustrates the separate compartments that comprise the entire structure.  The inner tent was likely Washington's private field office and measured about 8' by 10'.  The curtain hanging from the valance of the larger tent was attached all the way around the periphery and formed semi-circular areas at each end.  It's postulated that General Washington slept on one end and his baggage and servants were settled at the other end.  You can learn more and see more details on CW's First Oval Office page. 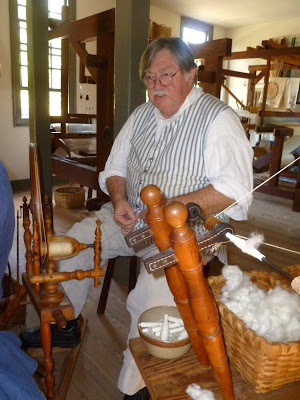 We've enjoyed chatting with Max Hamrick, Jr. during many of our visits over the years, as he's developed our appreciation for the weaving craft displayed in the Historic District.  I believe Mr. Hamrick has been the weaving and dyeing expert here since 1988, and he informed us on this visit that he intends to retire soon and leave the weaver's shop in the capable hands of Karen Clancy and her apprentices.  We suspected at the time, and have confirmed since, that this would be the last time we would visit with Mr. Hamrick in this manner.  May your retirement years be many and fruitful, Mr. Hamrick! 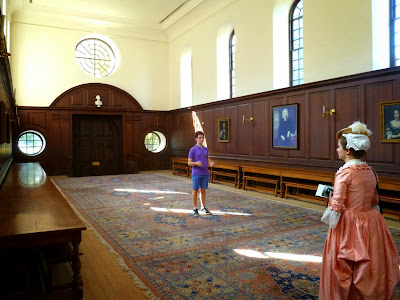 This room is part of the oldest academic structure in America, the Sir Christopher Wren Building on the campus of the College of William and Mary.  The college is located just west of the Historic District, and since it's important in the history of colonial Williamsburg, a visit here is a natural extension of a visit to CW.  This main hall was part of the original structure, but since the building has been modified after each of its three fires, this room may not have had this appearance when first constructed in 1695.  Even so, I wonder if the windows were inspiration for J.R.R. Tolkien in the 20th century... 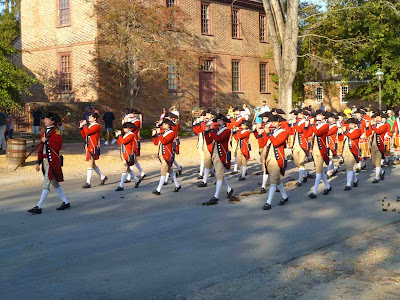 On our way back east on Duke of Gloucester Street we encountered the Fife and Drum Corps marching west.  Thomas Baker assumed the role of lead fifer, and I even sighted Mark and Cookie Baker walking along with the Corps.  Unfortunately, there wasn't time for a visit since we were already late for our dinner reservations.  It was a sad moment waving to the Bakers from across the street, unable to attract their attention. 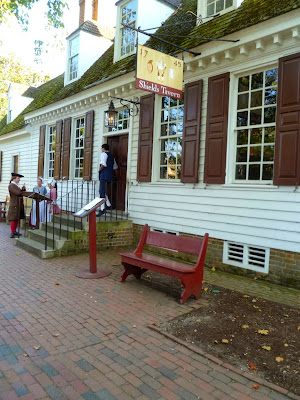 Good things were waiting down the street, however.  Dinner at Shield's Tavern was a special treat and an appropriate prelude to our evening's entertainment... 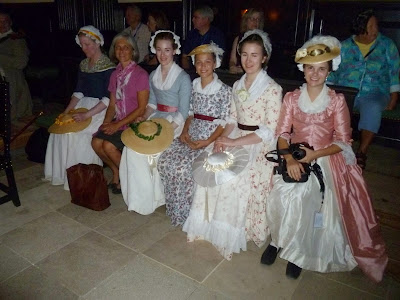 ... a Capitol Concert featuring 18th century (or earlier) music performed by The Governor's Musick.  My seat was on the far end next to Karen, nearly rubbing elbows with Wayne Moss, the viola da gamba player (on the far left).  Just in front of my seat is the chair occupied by Herb Watson, the flutist.  None of the seats are bad in the Capitol, but we were honored to truly be in the "spit zone."  More than an hour of lovely classical music was the perfect way to end this visit.