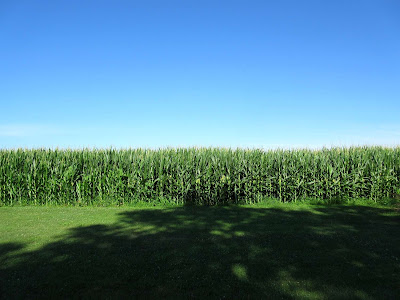 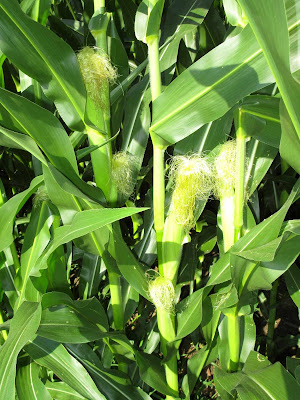 Week 11 brought slightly cooler temperatures (about 10 percent below the historical average), adequate rainfall, and no unusual incidents. As a consequence, the ears continued to develop nicely and the plants were well into the process of pollination. The overall height of the plants climbed a few more inches to 112. 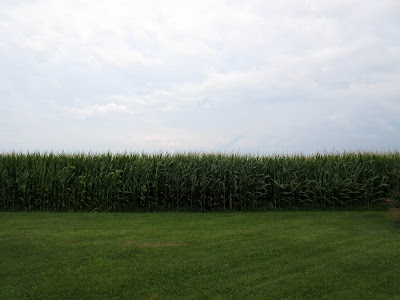 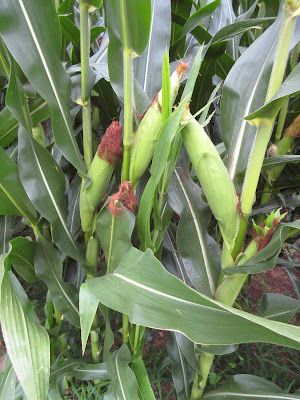 Since the silks were considerably more brown than the week before, we know the pollination period was finished and that kernels were developing on the ears by July 17. Temperatures were near normal (about 3 percent above the historical average), and rainfall was pleasantly consistent. I'd noticed about this time that it had been several weeks since we had received an extended rain shower, as all of our rain had come in thunderstorms. Nonetheless, it's been sufficient to keep all our plants and aquifers well supplied. The corn height plateaued at 112 inches as the plants concentrate their energy on ear development. 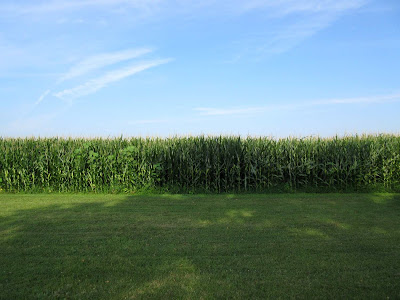 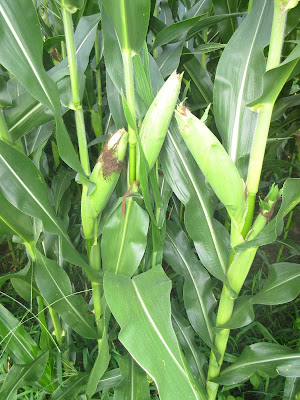 I don't think it's evident in any of these photos, but I noticed Japanese beetles congregated on several ears where the silk enters the husk. Fortunately, they appeared to be attracted after the silks turned brown, but their presence surprised me since I'd never noticed them attracted to ears of corn before. The week preceding July 24 experienced more growing degree days than average on each of the seven days. In total there were 17% more growing degree days than the historical average, and thunderstorms continued to provide adequate rainfall. We should begin to see stalk drying near the ground soon since we're well over halfway to harvest. 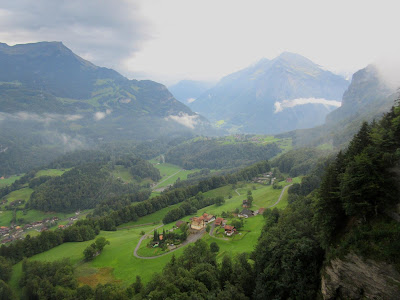 If you could live anywhere you wanted, where would it be? A tropical beach? A metropolitan skyscraper? A snowy mountainside? A Mediterranean cliff? While our visit to Gimmelwald, Switzerland last September introduced us to some breathtaking scenery, the Aare River Valley probably more closely fits my idea of an ideal domicile: more easily navigated than the High Alps; forested, but not too heavily; mountainous without feeling claustrophobic or acrophobic; and as you can tell in the photo, scenic even on a cloudy day. I love my surroundings in Central Illinois, but this region definitely gives my home a run for its money.

Our primary reason for visiting this region was to view Reichenbach Falls, probably best known as the location of Sherlock Holmes' last battle with Professor Moriarty in Sir Arthur Conan Doyle's "The Final Problem." The Reichenbachfall funicular carries passengers 800 feet up the mountainside to a viewing station that offers a classic view of the full height of the section that impressed Conan Doyle enough to include it in his story. That's not the only view from that station, however.

If you turn from your view of the falls and look toward the northeast you'll see the pleasant valley pictured above. Rain had fallen just before we arrived, leaving low clouds and the misty atmosphere that gives this photo some of its charm, however, I suspect the valley may be equally charming in full sunlight. I think I could be content living in this quaint valley for the rest of my life.

As a tourist attraction goes, I recommend this area for the trip (train or hike) to the Upper Reichenbach Falls and the delightful views of the valley from the mountainside. Although we didn't see nearby Aare Gorge while we were there, we understand it is very scenic and offers unique hiking opportunities via walkways over the river. Should we return to this part of Switzerland again in the future, I would like to include more time in the itinerary to explore this area more fully. Anyone care to join us? 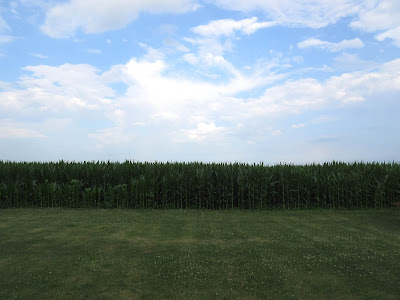 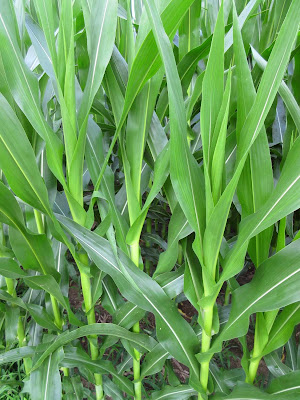 The week leading up to June 26 produced the largest weekly growth this year as the plants leaped to 84 inches in height blessed by 1.6 inches of rain one day that week, and 23% more growing degree days than average. At that point, there was no evidence of tassels or ears on the stalks I observed. 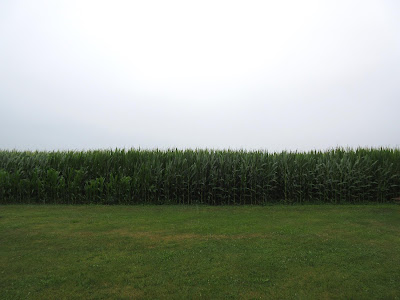 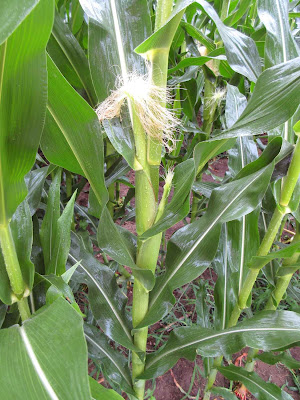 The long-awaited ears have appeared! Even though cooler weather resulted in 16% fewer growing degree days than is typical, the plants have continued to mature normally and reached 106 inches height to the tips of their tassels. An additional few tenths of an inch of rain helped insure against drought stress. Typically, the ear and its kernels is the primary feature of interest in corn plants, but since a portion of this year's crop will probably be harvested for silage like it was last year, the volume of stalk harvested is probably also important. We will continue to monitor both stalk growth and ear development as the season progresses so all our readers won't miss any exciting details!

Posted by Mr. Riggenbach at 3:00:00 PM No comments: Links to this post

"The Japanese beetle is probably the most devastating pest of urban landscape plants in the eastern United States." Those words from two entomologists at the University of Kentucky aptly describe the impact of these pests that unfortunately have invaded our yard again this year. 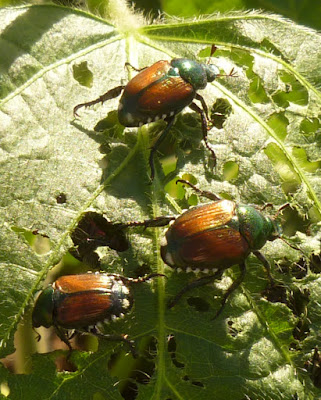 About four years ago I described our initial battles with Japanese beetles, and showed a picture of the Spectracide bag system that we employed. After being emptied several times, and being subjected to the winds common in our yard, that bag ripped beyond repair and forced me into a different alternative. I was pleased with the success of the lure and trap idea, but modified the concept as shown below. 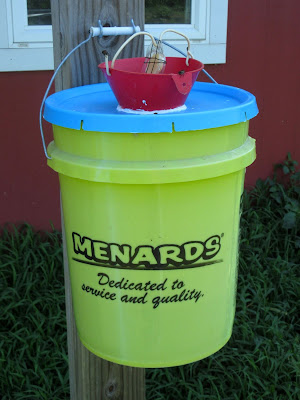 The lure is still the Spectracide Bag-A-Bug Japanese Beetle Trap2 Lure which you can see suspended by a 12 gauge insulated wire above the red funnel. The bag has been replaced by a 5-gallon bucket which contains about a gallon of soapy water. This allows me to avoid the steps of dumping the bag into a bucket of water and waiting for the bugs to suffocate. Every day or so I empty the bucket and refill it with soapy water and wait for more beetles to enter and die. Hundreds of beetles accept my invitation each day and enter the bucket to take a swim.

The bucket lid has a 3.5" diameter hole cut in the top and the funnel is simply caulked in place. The funnel end was trimmed back so the smallest portion of the funnel is about 1" in diameter to allow the beetles to more easily enter the bucket. After four years of use I replaced the lid this year as the original Menards lid became brittle and unusable after many hours of exposure to the sun. The bucket itself also cracked at the mounting hole of the handle, but I was able to relocate the handle to a different location so I hope to get more seasons of use from this bucket. 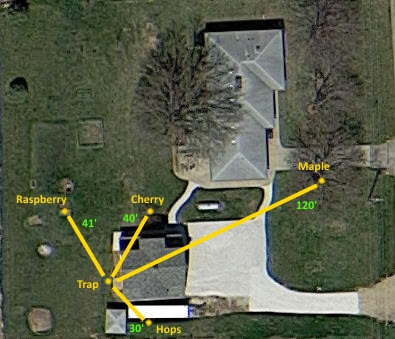 The big question is: does this type of trap attract more beetles than it kills? A quick search around the internet (and reading the article from the Kentucky entomologists quoted above) will show that there are plenty of folks that think these traps are a waste of money and worse for your plants than if you didn't have a trap at all. Spectracide recommends placing your trap 30 feet downwind from the plant of interest, but because our wind comes from lots of different directions, and we have four different plants that attract the beetles, a perfect location on our property would be hard to identify. The image above shows the trap location that has served us well for the last four years. As you can see, none of our plants is less than 30 feet from the lure, and most don't even have a line of sight to the lure. Whether that makes the trap more or less effective, I can't say.

What I can say: the damage due to Japanese beetles on our property is severely reduced by the presence of our trap. Does the lure attract beetles from neighboring properties? Maybe, but if our plants have less damage, I don't really care whose beetles I'm killing. Are there more beetles attacking our plants because I have a lure in my yard? Judging by the damage to the plants, I would conclude that fewer beetles attack our plants since we have less damage when the trap is active.

Tips for best success with a beetle trap
1. Set the trap out early in the season. By the middle of June here in Central Illinois the beetles' damage can be visible from a distance. In my experience, luring the beetles before they can cause extensive damage will reduce the total amount of damage done.
2. Pick beetles off of plants by hand. If you find beetles on your plants, you can easily remove them by grabbing them and tossing them into a bucket of soapy water. I carry my lure bucket to the raspberry plants and hops and have it close by when I physically remove as many bugs as I can. This is easiest to do in the morning or evening as the beetle are much more lethargic and typically don't try to fly away when you grab them. If you find grabbing them unpleasant, you can position your soapy water beneath the branch and shake them into the container. With taller plants like our cherry tree, I simply try to shake the branches to cause the beetles to fly away or drop to the ground. Either way, they're likely to smell the lure and be more attracted to my trap than the tree. The maple tree is too tall, so I make no attempt to remove the beetles from that tree.
3. Remove as many beetles as possible. Several sources indicate these beetles can smell a plant that is being eaten by another beetle, so it's common to see beetles swarm a plant and ignore its neighbor. I have found that if I can remove all the beetles from a plant the beetles are much less likely to come back to that plant. Repeating the process over several days can leave a plant beetle-free for the rest of the summer even though it had been a favorite days before.

I don't have scientific test results that prove our trap is beneficial, rather only my observations. I've seen the damage that beetles can do when left unchecked, and I remember wondering if our cherry tree was going to survive their attack. Since employing our lure bucket, the only time we've had noticeable damage was when I was late setting the trap out and the beetles got a head start on me. I don't have experience dealing with the beetles in the larva stage (other than killing the ones I find when digging in the yard), but I do know the adult beetles can be controlled significantly with a lure trap like mine.