...especially when it's good news from the County Health Department. 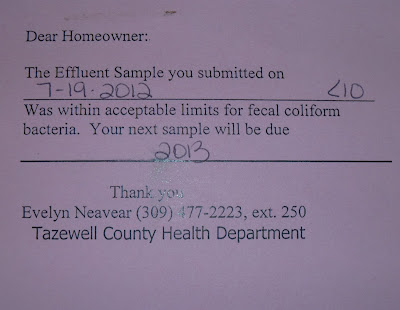 Once again, our downstream neighbors breathe a sigh of relief. 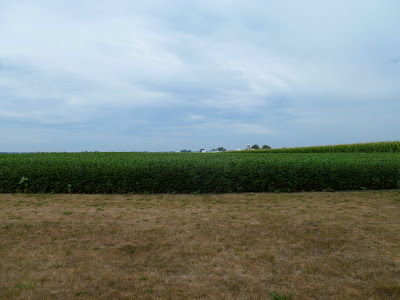 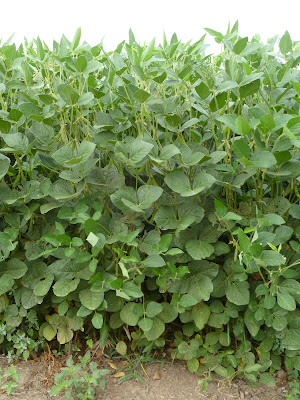 The bean stalks reached 42 inches tall this week, and I counted 17 fully emerged trifoliolates.  Large pods are seen at many of the nodes over the length of the stalk. 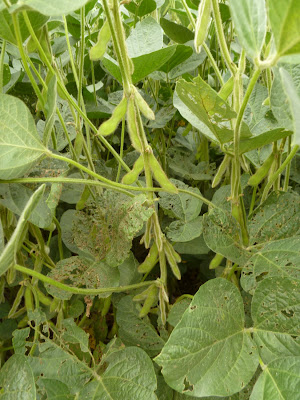 Although some of the pods have only two seeds, the seeds are continuing to grow.  We received 0.6" of rain this week split between two showers on the same day (thanks for your prayers) so the plants were able to supplement the moisture they're pulling from the ground.  As the seeds add mass during this stage, the vegetation will supply about half of the nutrients needed while the other half will come from the roots.  Please continue to pray for rain as this stage is crucial in determining the size of Farmer Wagenbach's harvest.  For those keeping score at home, I'm describing today's growth as V17 and early R5.

It's been eight weeks since I fell off my bike so my chiropractor suggested we take a couple new x-rays to see how my bones are healing.  He thinks the bones are showing good progress, but are not yet completely healed.  Since he gave me a 12 week estimate initially, I'm not disappointed.

Interestingly, he noticed something else that had escaped his attention eight weeks ago.  It appears that I broke two vertebrae instead of just the one we previously noticed!  As you can tell in the image below, T7 has a wedge shape similar to T9, which is indicative of a compression fracture.


Fortunately, two broken bones are treated the same way as one, and my prognosis has not changed.  I'm grateful for noticeable progress in flexibility, strength, and comfort, although I suppose I'd agree that my back doesn't feel completely healed yet.

For reference, I've included this image of that same portion of my spine three years ago.  If I hadn't seen my name on the x-ray film, I'd have a hard time believing my back looked this good!  Thanks to all who have been praying for my healing through this episode. 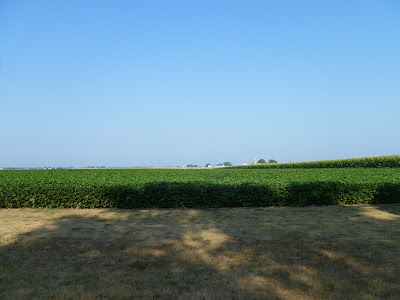 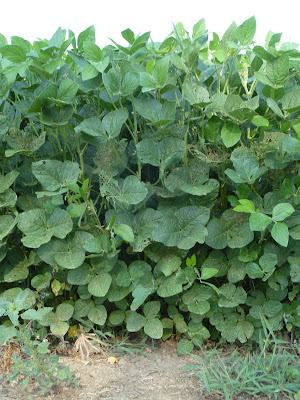 On the 15th the stalks had grown to 35 inches and 13 fully emerged trifoliolates were visible.  I was impressed that the plants continue to grow and develop even though we've had very little rain for several weeks. 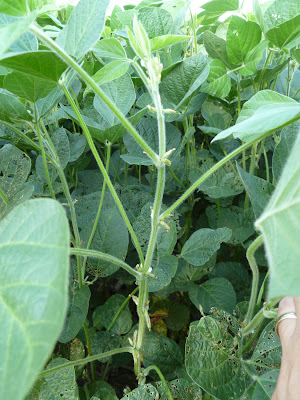 At this stage, pods of at least 3/16" are visible at the upper nodes and larger pods are forming at the lower nodes.  My amateur scoring is V13 and R3.  I'm told the plant is very vulnerable to temperature and moisture stress for the next few weeks.  Coincidentally, we are experiencing temperatures well above normal along with the lack of rain mentioned above. 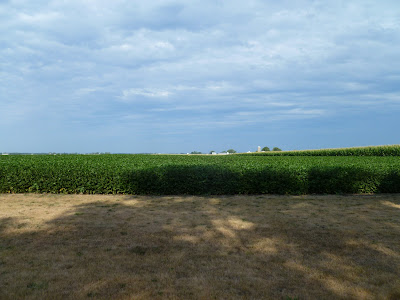 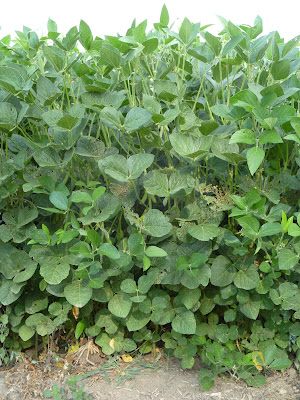 The stalks measured 39 inches tall this week and 15 fully emerged trifoliolates were visible.  If you look carefully, you can see pods that are about an inch long on the nodes that are about fourth from the top, so if we're not there already, I would say we're pretty close to the R4 stage. 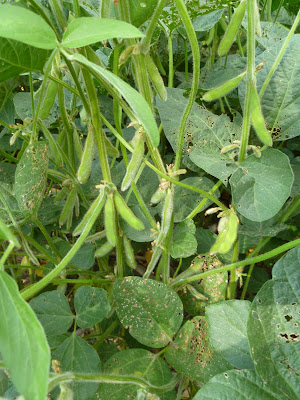 Here's an image of the maturing pods on some of the middle nodes.  I don't know how this crop compares to a normal year, but I think it looks encouraging considering the heat and drought we're experiencing.  Now would be a good time to pray for rain for Farmer Wagenbach's beans and the other crops in the area.

A few observations on 2012 weather so far

Even though our temperatures here in Central Illinois have seemed consistently above normal since last winter, I thought it might be interesting to look at the data to see just how warm it's been.  The data behind both the charts shown here is the daily mean temperature as measured at the Peoria International Airport; the mean temperature being a simple average of the daily high and low temperatures.

The first chart shows the actual daily means plotted as the red curve, and the historical average daily means plotted in blue.  Since the chart begins at January 1, the mild temperatures we experienced in October, November, and December 2011 are not obvious in this data.  January of this year had a couple of brief cold snaps, February had even fewer days below normal, and most of March was part of a 35-day string of days whose means were significantly above average including 6 record daily highs.  Below normal rainfall accompanied our current 24-day string of above normal temperatures to create drought conditions as severe as any I can remember.


This next chart shows the deviation of the actual mean temperature from the historical mean as the light blue bars that in 2012 have been warmer than the historical mean over 81% of the days so far.  Although the temperature has been much hotter lately, this chart makes it obvious how much warmer than normal the temperatures in March were.  Some days were over 30 degrees F hotter than normal!  No wonder the plants started budding early this spring!

I don't predict the weather, but unless the next five months are much colder than normal, our cumulative average should remain significantly above historical levels throughout 2012. 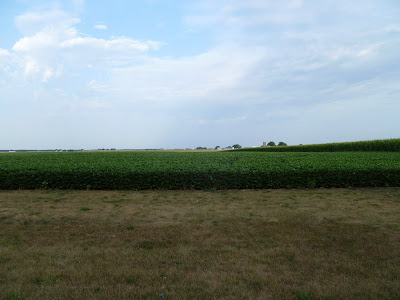 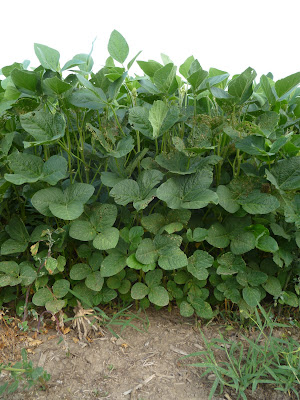 Most of the plants measured 31 inches tall on July 8, and I counted 11 fully developed trifoliolates.  You can see beetle damage on some of the upper leaves, but healthy leaves continue to appear above them.  I think the beetle activity has slowed significantly over the past week, so this crop shouldn't suffer any more because of that pest. 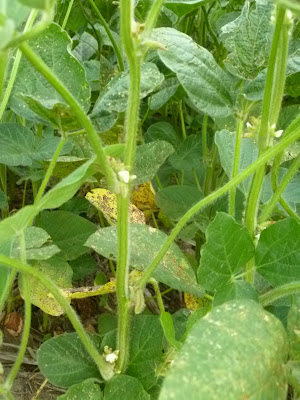 The big new this week is the appearance of pods!  You can see some beginning to form at the juncture of the lateral branches in the middle of this image.  I apologize that the central stalk of the plant is not is focus.  Since we've had very hot weather and minimal rain, we'll watch these (and hopefully other) pods develop to try to determine whether these plants are suffering heat stress at this critical time in the formation of the crop.

We finally have an identity

There are times when privacy and seclusion are good things.  There are other times when you'd like to help folks find your house.  Like when guests are coming over, or the UPS delivery guy has a package for you, or a customer is trying to find your place of business.  As far as we can tell, folks have been having trouble identifying our house for over 50 years, since we have no indication house numbers ever adorned our abode. 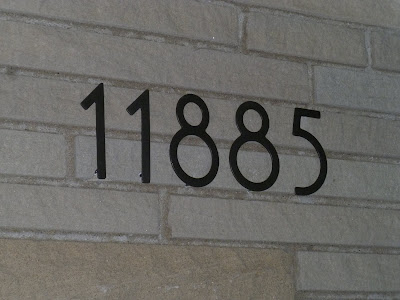 We chose these 5-inch-tall, stainless steel numbers powder coated in dark bronze hoping that they would coordinate well with the other craftsmanish features of the house.  Designed to stand off the wall about a quarter inch, we've anchored them in the stone between our two front doors. 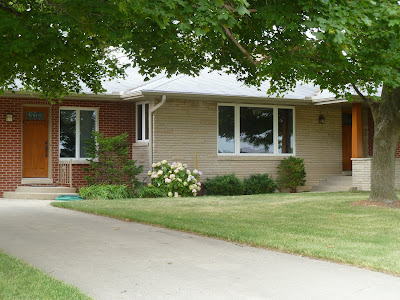 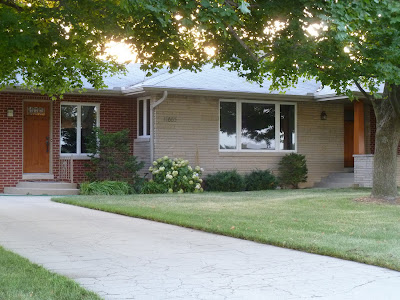 Can't see the numbers very well in this photo?  Come on over and see for yourself, up close and personal! 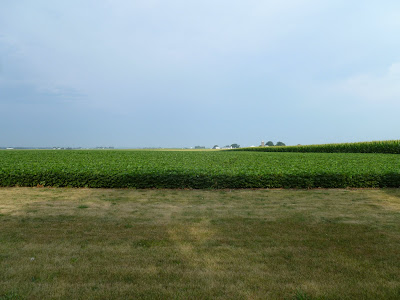 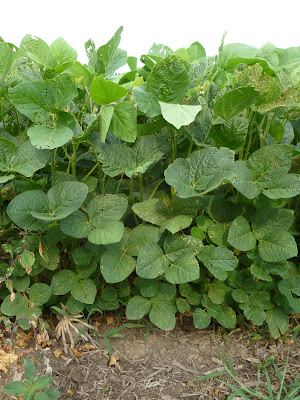 Most of the plants measured 25 inches tall on this day, and I counted at least nine fully emerged trifoliolates with more developing. 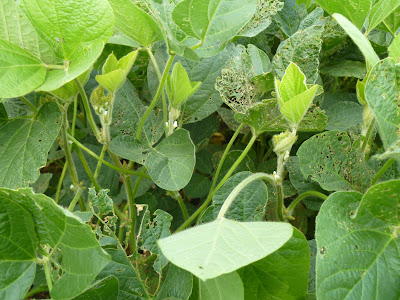 In this photo we can see blooms developing on the upper nodes of the plant, and I observed blooms on all the other nodes as well as most (all?) of the branches.  My sources inform me that the plants should continue to gain height, foliage, blooms, and eventually pods.  We'll keep watching and strive to keep you informed of all the developments.