First mowing of the year 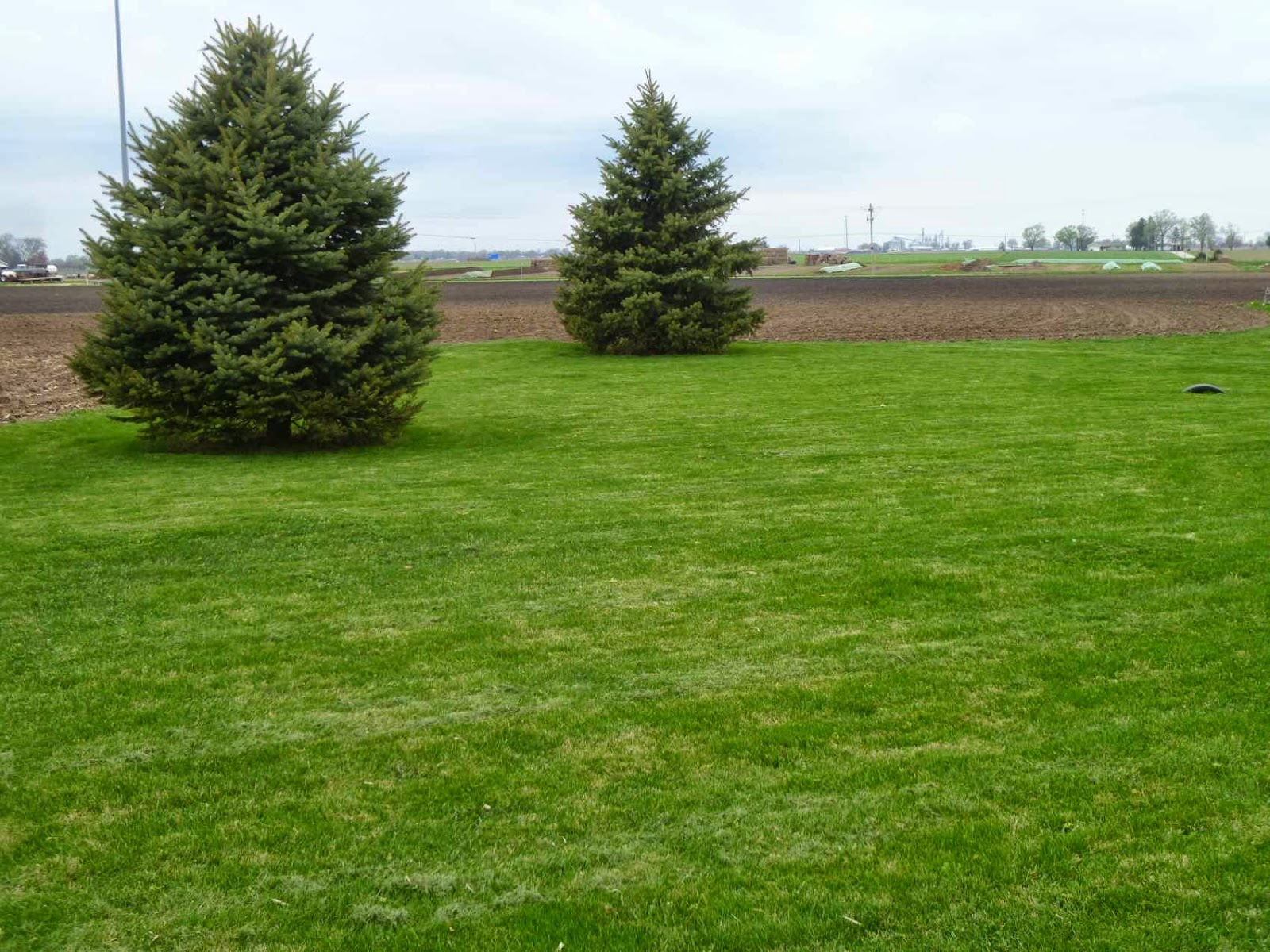 I tried to push the mowing off until May this year, but some parts of the yard were getting unruly, and all the neighbors had already mowed, so the pressure to conform was just too great.  Our long, cold winter made many of us think spring would never arrive, but this spring has been pretty mild and pleasant, all things considered, which also means the grass eventually needs attention.

I realize Vermont is better known for its maple syrup, and Quebec supplies much of what the world consumes, but that doesn't stop our neighbors here in Central Illinois from doing their part to meet mankind's demand for real maple syrup.  Last year we watched in admiration as our farmer neighbors tapped dozens of trees around our neighborhood, and spent the time and money necessary to gather hundreds of gallons of sap to boil down to dozens of gallons of syrup.

This year, when they offered to tap the trees in our front yard, I quickly encouraged them to do so, and within a few hours, our trees were contributing to the harvest! 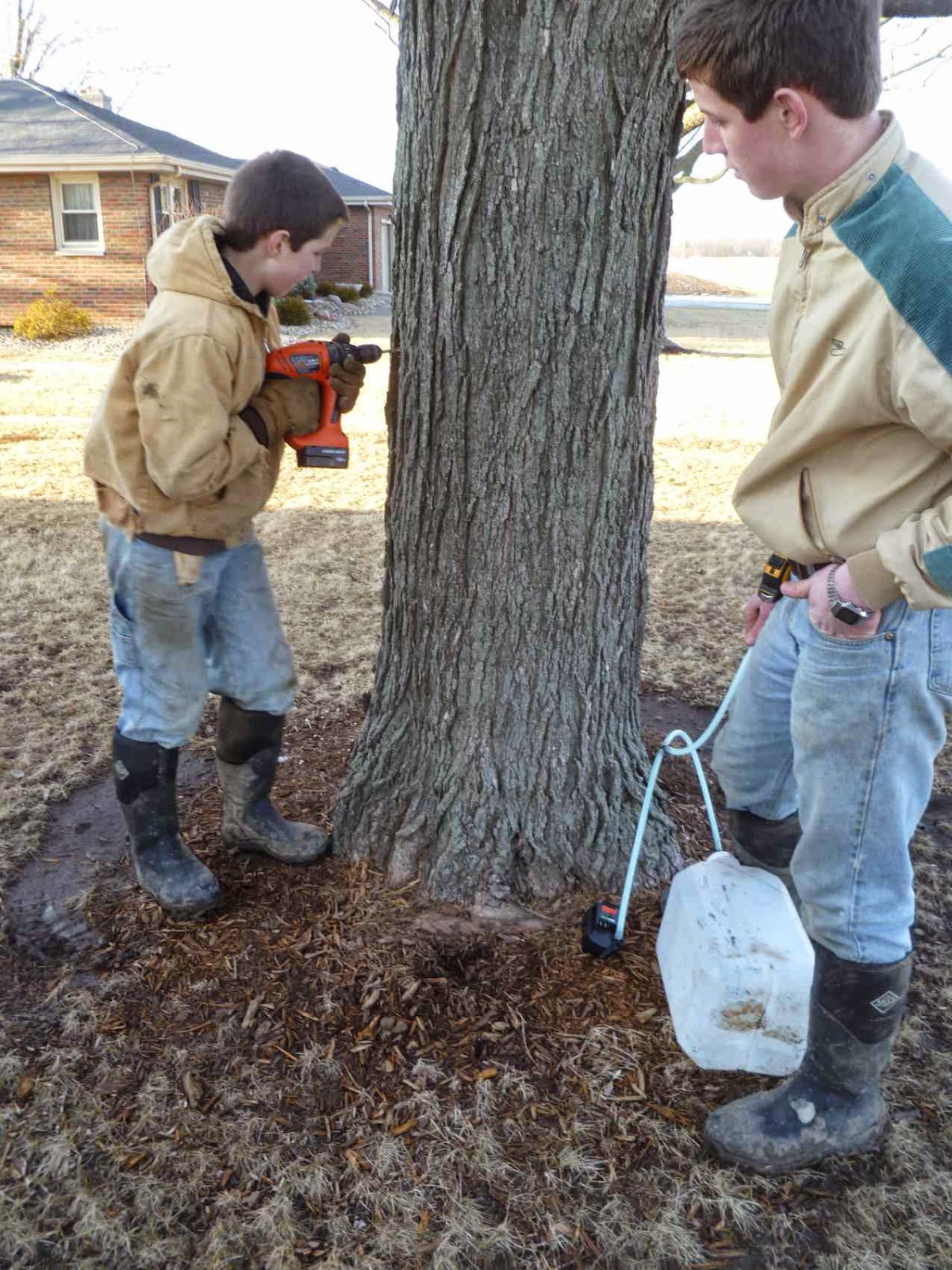 Here's Thad and Philip drilling the holes and setting the taps.  The number of taps was determined by the size of the tree.  Two of our trees could accommodate three taps, while one tree was best left with only two. 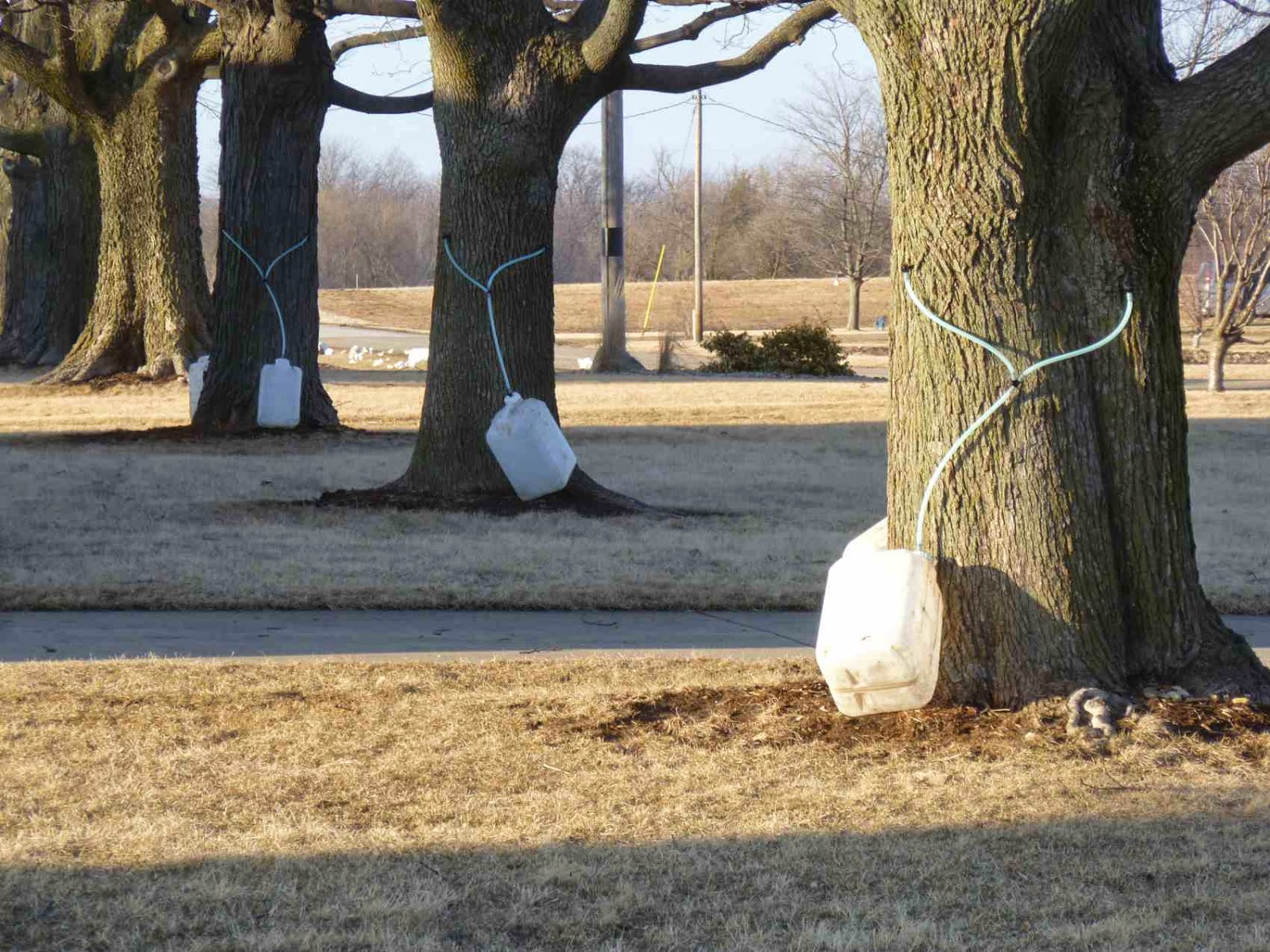 The arrangement in our yard had at most two taps running into one five-gallon jug, meaning we had five jugs total receiving sap.  The sap is very watery, unlike pine sap, so the taps, lines, and jugs don't clog easily. 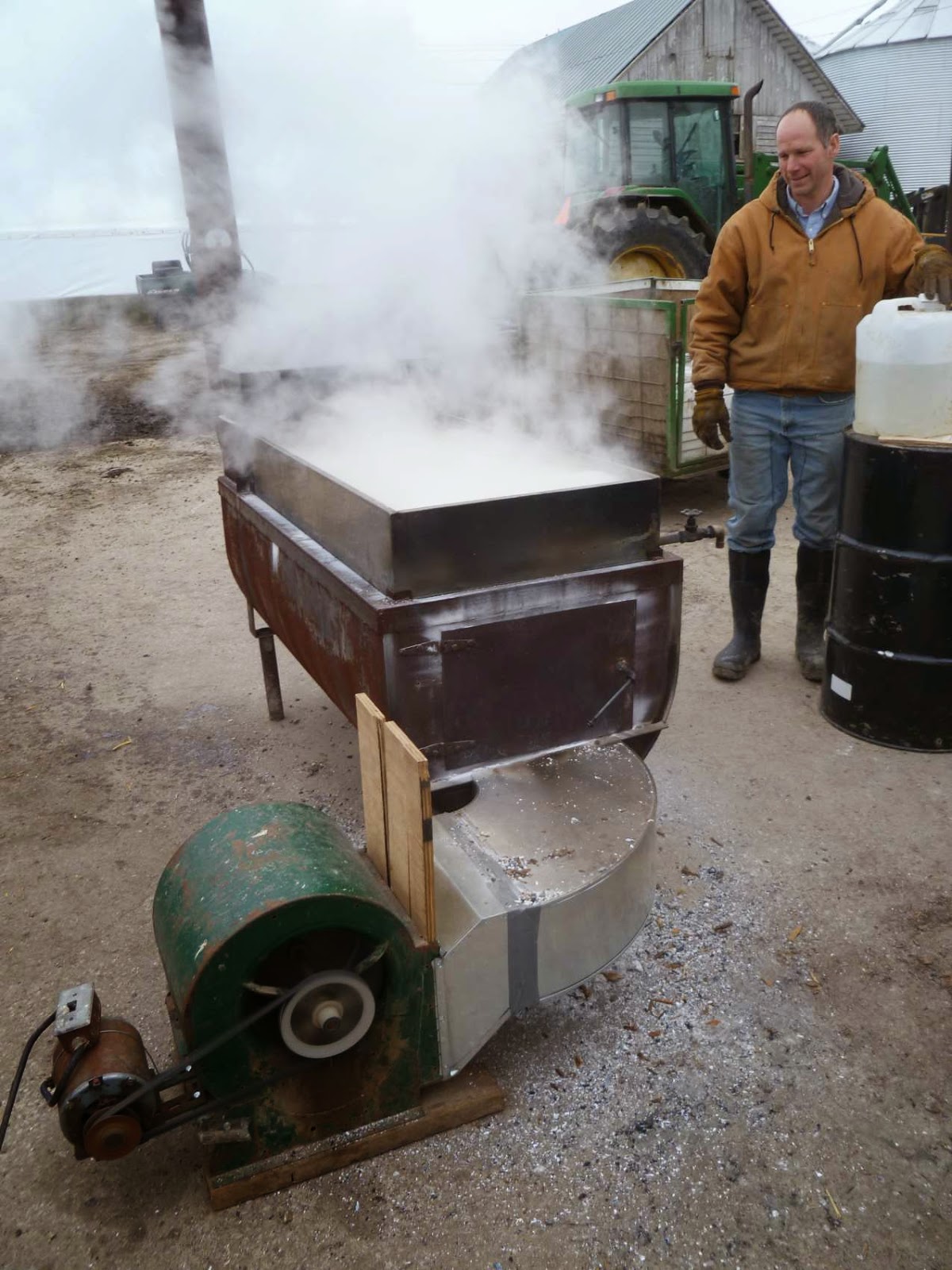 The critical operation of boiling to sap down to syrup was begun on this fine example of Steiner ingenuity and manufacturing.  The half-barrel stove box on the bottom was reinforced and improved this year based on lessons learned last year.  The blower and ductwork in the foreground force air into the combustion chamber to insure that the fire has adequate oxygen to burn vigorously, while the door on the stove above the ductwork allows access to add wood as needed.  The vertical boards just downstream of the blower serve as a damper to better control the air flow.  Hot exhaust gases exit through a vertical chimney at the far end. 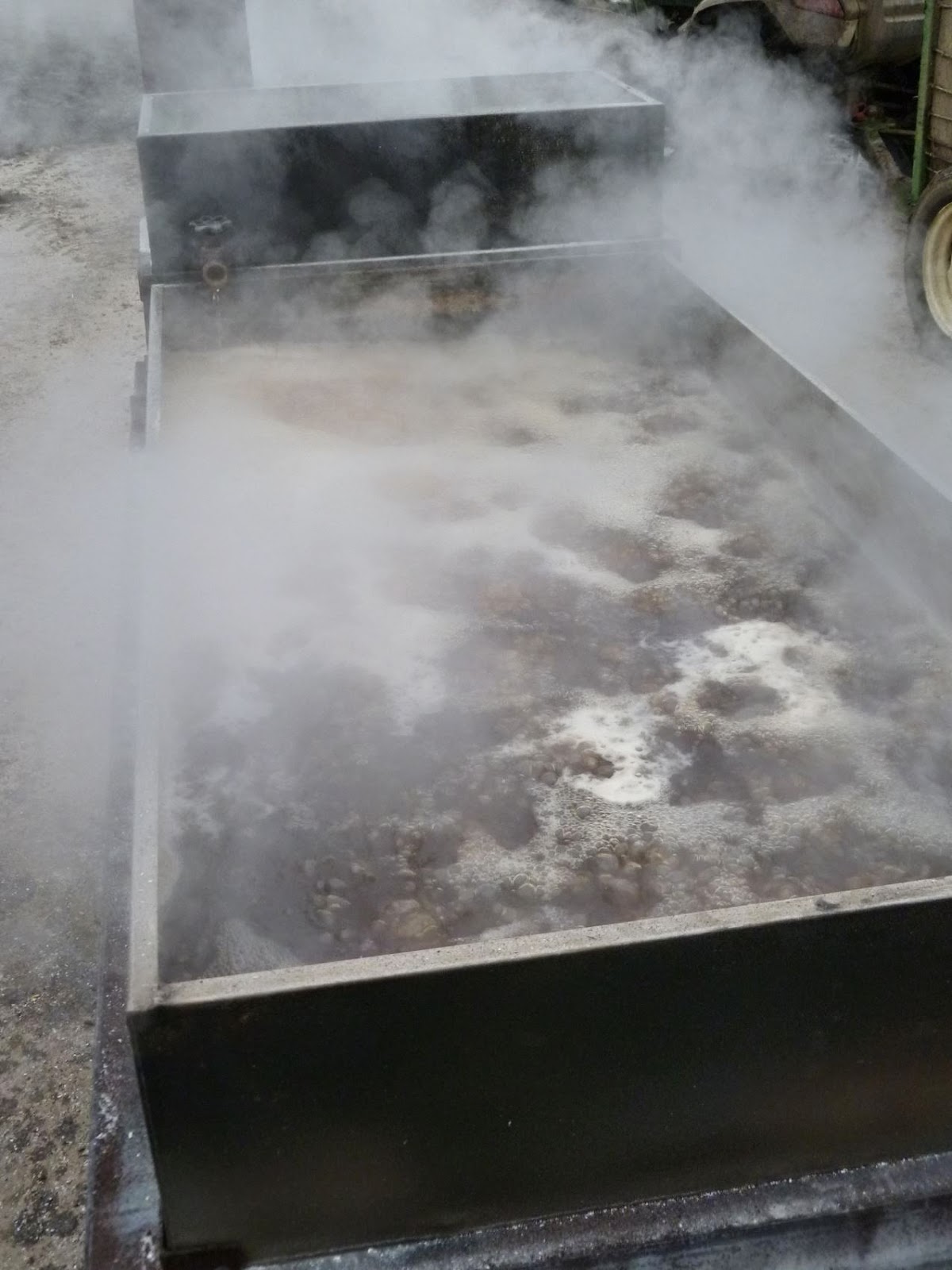 The main pan on the stove is a custom-built, stainless-steel unit about seven inches deep that holds about five gallons per inch of depth.  It's fed by a smaller pan in the background that preheats the cold sap before it's added to the main pan.  That ensures the main pan maintains a constant boil throughout the many hours it takes to boil a batch of sap. 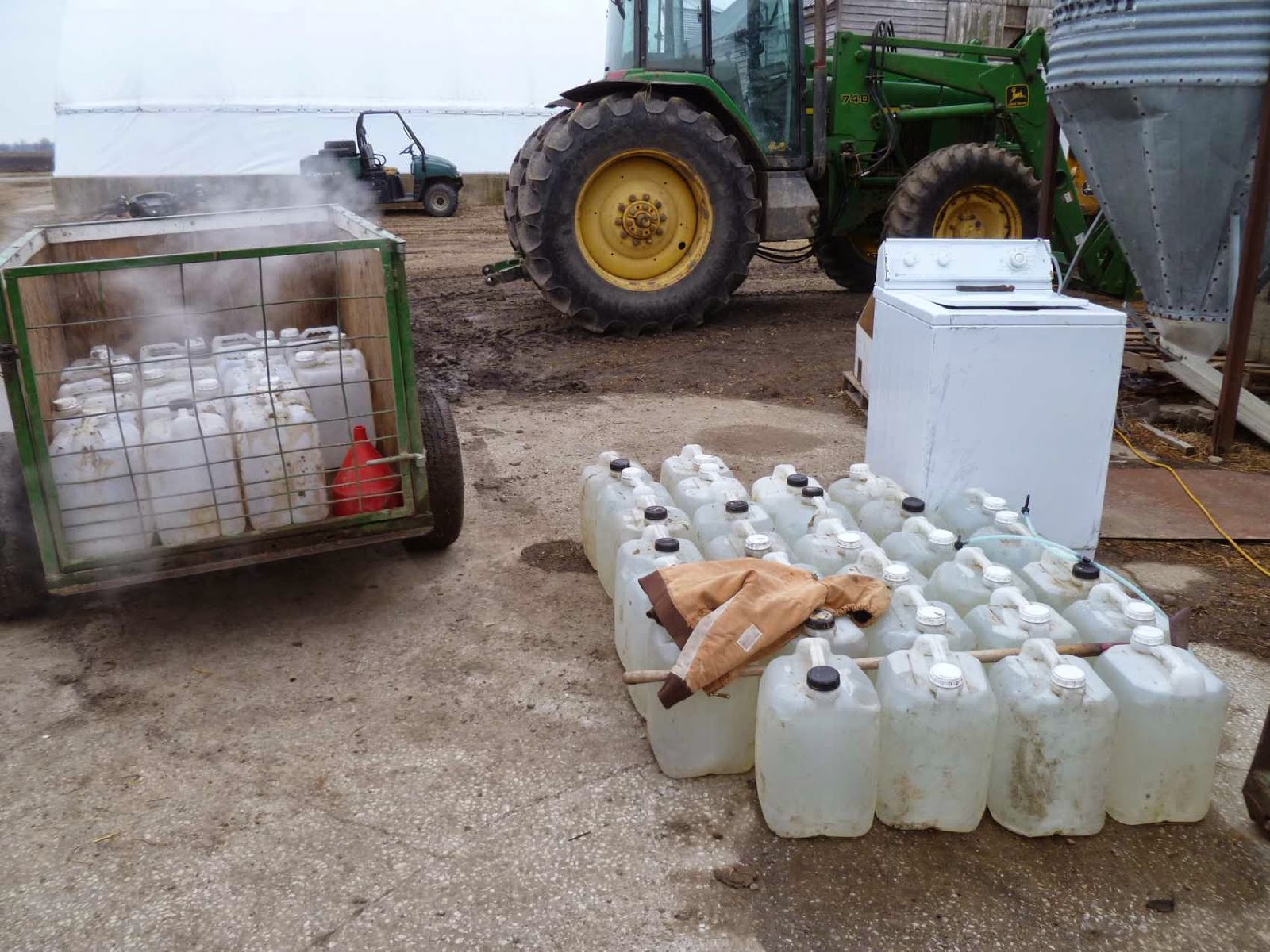 How big is a batch of sap?  This year, the Steiners commonly boiled 200 gallons of sap at a time, that would yield as much as eight gallons of syrup.  That 25:1 ratio is very low for maple syrup, and can be as high as 40:1.  In this photo, about 150 gallons of sap waits to be boiled, although not all of it was included in this batch.  (The washing machine in the background was not used in preparation of the syrup). 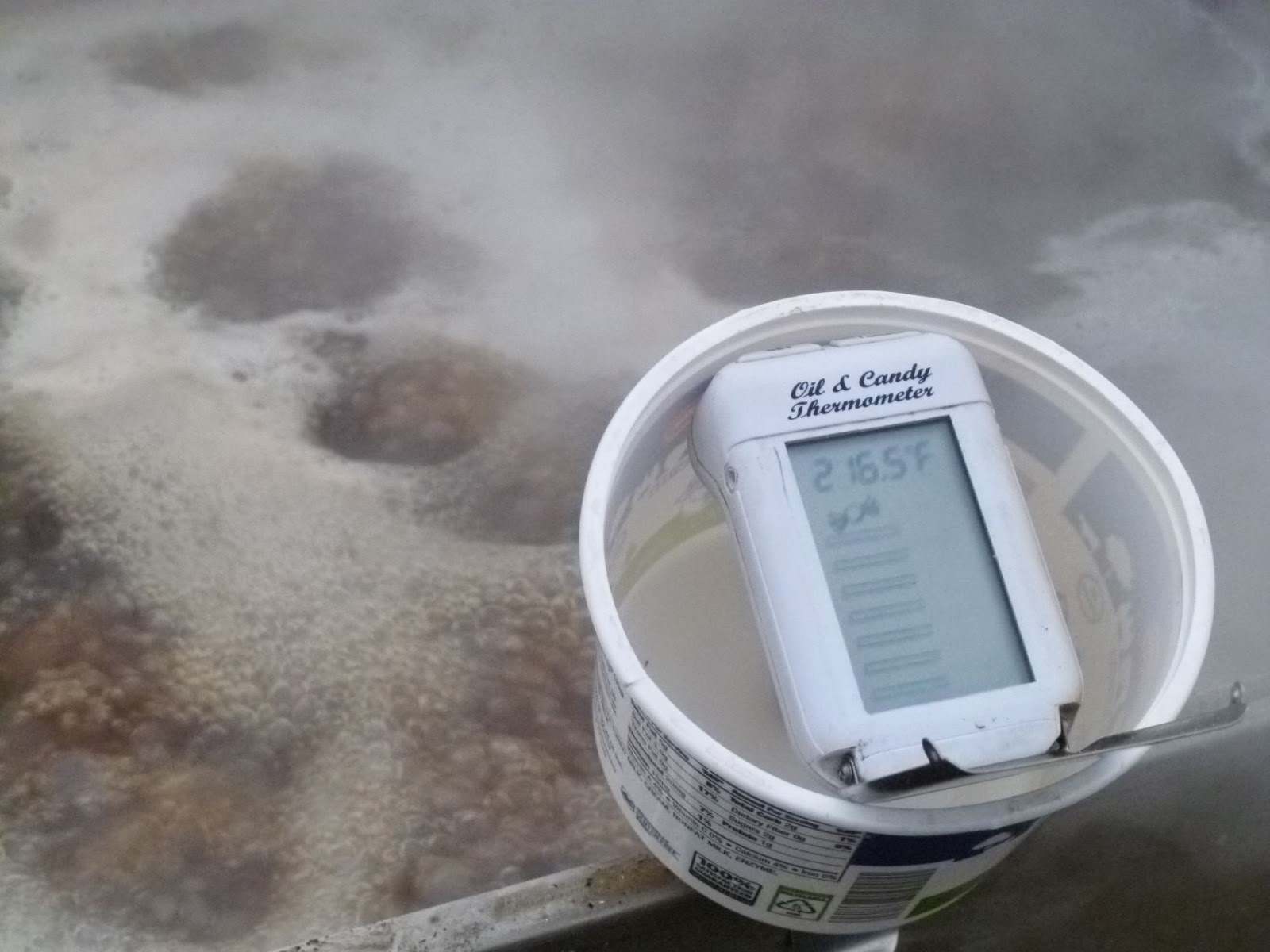 Syrup is judged complete when the temperature reaches the proper value.  In this photo you can see the syrup was a lovely brown color while the temperature was well above 216°F.  Several more gallons of sap were due to be added to this batch and boiled down before the near-syrup was transferred to the house kitchen stove for finishing.

The total harvest for our neighbors was about forty gallons of syrup this year, which exceeded last year's total.  Our trees contributed about 40 to 50 gallons of sap in the three weeks that they were tapped.  The whole process is very labor-intensive, so it's easy to understand why real maple syrup is so expensive, but when waffles or pancakes are on the menu, nothing compares to real maple syrup, especially when it comes from your front yard!