The Hegeler Carus Mansion in La Salle, Illinois had escaped our attention until a few weeks ago, and looked promising enough to warrant a visit. The 16,000-square-foot, seven-level home was built between 1874 and 1876 by Edward Hegeler, who had chosen the La Salle area as the home for his zinc smelting business almost two decades before. Through the hard work of Hegeler and his partner, Frederick Matthiessen, M & H Zinc Company became the largest zinc manufacturer in the U.S. by 1880, and held that distinction for 30 years. 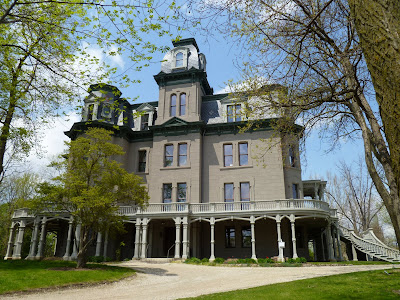 Edward and his wife Camilla raised eight children in this 57-room mansion which remained in the family until the Hegeler Carus Foundation was formed in 1995 to assume care of the structure. Paul Carus was invited by the Hegelers to work as editor at Open Court Publishing, which the Hegelers had launched in 1887, and married their daughter Mary in 1888. Paul and Mary raised their six children in the home, the last of whom died in 2004.

W. W. Boyington (better known for his work on the Chicago Water Tower) was commissioned as architect, and August Fiedler designed the interiors. Only one room is restored to near-original condition, but many of the rooms are virtually unchanged from their original design. I'm amazed that a home can survive several owners over 130 years without remodeling! In this case, I'm glad the successive generations recognized they probably couldn't improve on the original product and just left it alone, although many areas are pitifully faded or damaged. The structure is now a National Historic Landmark, so renovation requires more paperwork and approvals, but could be better funded.

Although the interior desperately needs restoration, one can still appreciate the details Fiedler used to tie rooms to each other, and make them each unique at the same time. I was especially impressed by the parquet floors as each room had a unique design that complemented the other woodwork in the room. Some decorative features were painted on the walls and ceilings, right alongside the intricate carvings.

The photo above shows the house as viewed from the street. A family entrance at ground level beneath the central tower is used for general admittance today, as the original formal entrance to the right is no longer available to the public. A large, horseshoe-shaped staircase welcomed visitors and placed them on a porch that wraps almost all the way around the house, from which they entered the home at the end of a broad welcoming hall. We were told the family entertained in that hall, in the parlors on either side, and in the dining room at the opposite end of the hall. The layout of the house was impressive, and yet comfortable, convincing me that another visit may be in order if the restoration of the home continues successfully.

Thanks for visiting!
Posted by Mr. Riggenbach at 1:33:00 PM 4 comments: Links to this post

Email ThisBlogThis!Share to TwitterShare to FacebookShare to Pinterest
Labels: architecture

As shown a few days ago, the corn is sprouting and well on its way to building our privacy fence to the west. 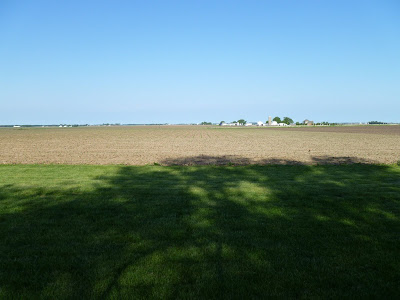 Most of the plants I checked measured 3.5" tall, and had grown visibly since the first photo was taken three-and-a-half days earlier. I have a feeling this crop could beat the impressive stand back in 2009. Stay tuned here for all the details!
Posted by Mr. Riggenbach at 9:04:00 PM 2 comments: Links to this post

The most popular posts on this blog

I like the "Stats" feature on Blogger. I've been observing traffic on this blog with Sitemeter from the beginning, but since Blogger added the stats feature I have a bit more insight than I get with the free version of Sitemeter. One item I find interesting is which posts are the most popular. Far and away the most popular is my two-year old post on gutter hanger testing. Since we get quite a few visits from Google searches, I thought it would be interesting to see what sites Google recommends for gutter hanger testing. 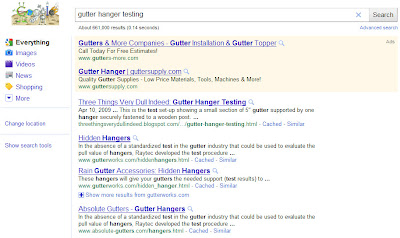 Look at that! The only pages recommended higher are gutter supply retailers that paid to be at the top of the list. That post may be #1 on our blog for all time, but it's only the fourth most popular in the last month, #9 for the last week, and hasn't been visited at all for the last day. 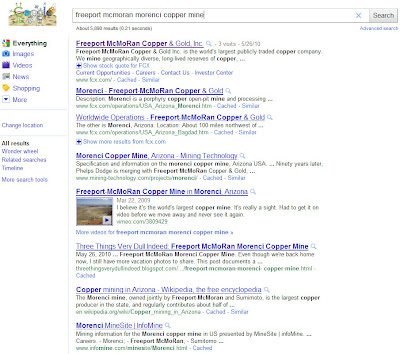 Currently number two on the all-time list, is last year's post about my visit to the Freeport McMoran Morenci Copper Mine, which doesn't do as well on Google (#6 when I did the search shown above behind three hits on the company's website), but does show up on the first page. The copper mine post has been the most popular for the past month, third for the past week, and is tied for first for the last 24 hours. Since it's only been available half as long as the gutter hanger post, it could gain on the #1 spot given more time.

The competition for the number two spot is pretty intense, with my post on Colonial Williamsburg's buildings vying with the August 2009 corn growth chart, and Karen and Lily's account of part 4 of their trip to England all of which are giving Freeport McMoRan a run for their money. If you're really desperate for entertainment, try a Google search for "corn growth chart," or "Williamsburg in the fall."

Email ThisBlogThis!Share to TwitterShare to FacebookShare to Pinterest
Labels: contemplations

What you've all been waiting for... 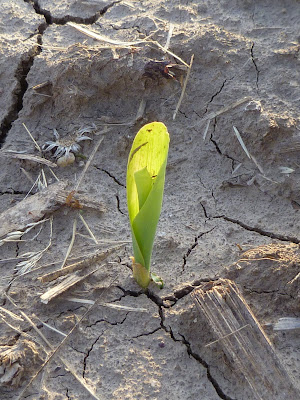 This evening I noticed lots of little plants sprouting up in the field behind our house. Looking a lot like corn, we'll have to keep a close eye on this development. More details to follow after our weekly measurement on Sunday.

A Springtime Survey of Our Property

We've been pleased with a few things of beauty around our yard over the last few weeks, and we would like to share them with all of you. 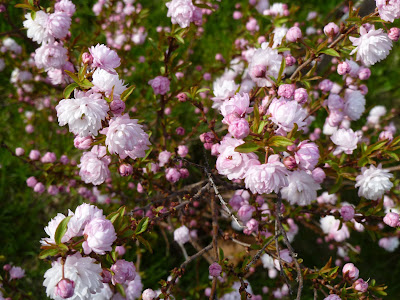 At the end of April, the almond bush exhibited more blossoms than we've ever seen on this bush. We transplanted it from a shady spot a couple years ago, and I think it likes full sun better than shade. 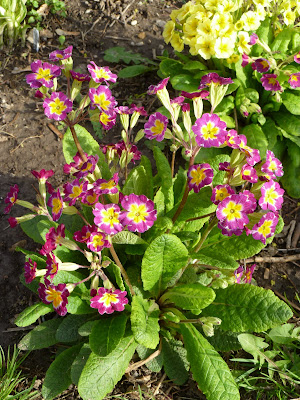 About the same time, the primrose plants were blooming in another area. These were also planted a couple years ago, and this was their best performance as well. 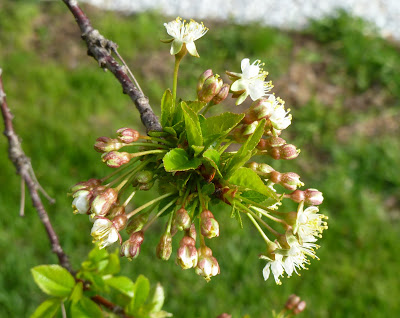 This is a typical branch on the cherry tree in late April. We were astounded to see so many blossoms after a big cherry harvest last year. Alas, by early May we experienced a freeze in our yard, and many of the potential cherries died. It looks like a limited crop of cherries this year. 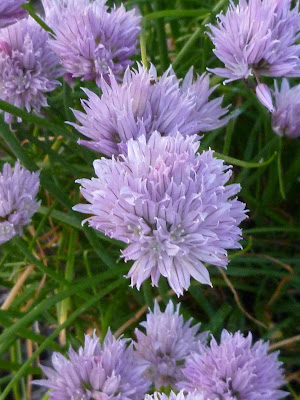 I took this photo of the chives today. They've done well the last couple years, and it looks like they are almost ready to consume now. 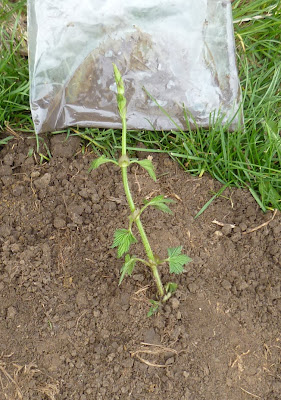 I planted this new food crop in mid April as a rhizome, and I hope to find enjoyment in measuring the growth of at least six of these plants this summer. Can anyone identify it? 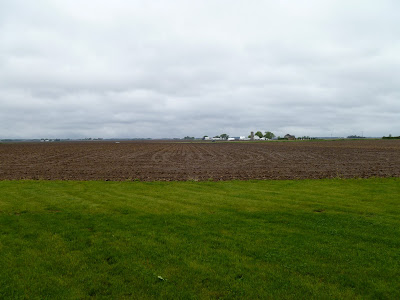 Last, but not least, is the neighboring property to the west where something was planted about a week ago. This photo was taken last Sunday, but there is nothing sprouting yet. Don't lose sleep worrying about this field, I'll provide all the details as the growing season progresses. Thanks for visiting!