Has this been a normal winter?

Most of us here in Central Illinois have noticed that the temperatures have been running a bit colder than average over the last few weeks, such that some of us have wondered, "Is this winter colder than normal, or are we just spoiled by the last two winters that were milder than average?"  For the sake of this investigation, "normal" temperatures are the simple average of the historical average high and low temperatures for each day.  For instance, the historical average high for February 13 is 36°F and the low is 19°F in Peoria, Illinois, so the "normal" mean temperature for today is 27°F.  Naturally, it's unusual to experience both the average high and low on any given day, so comparing the mean is helpful in determining whether the weather has been warmer or colder than average.

Figure 1 below shows the daily temperature deviation from average since the beginning of winter on December 21.  The blue bars represent the degrees F above or below the daily average, while the red curve is the cumulative deviation from the average over the same period.  Of the 54 days recorded so far, only 17 have been warmer than the historic average, and of the 35 colder days, 25 are 10 or more degrees colder than their average.  January 6 deserves special recognition for recording a mean temperature 31 degrees colder than the historical average!  The mean that day was -9°F, and the high for the day reached -5°F, but alas, that was not the coldest January 6 on record. 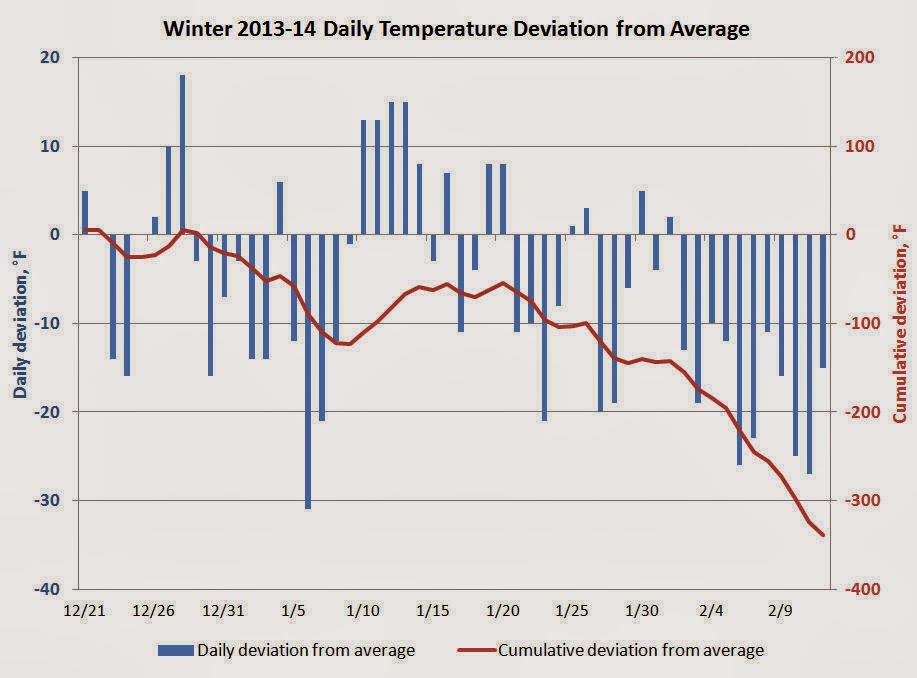 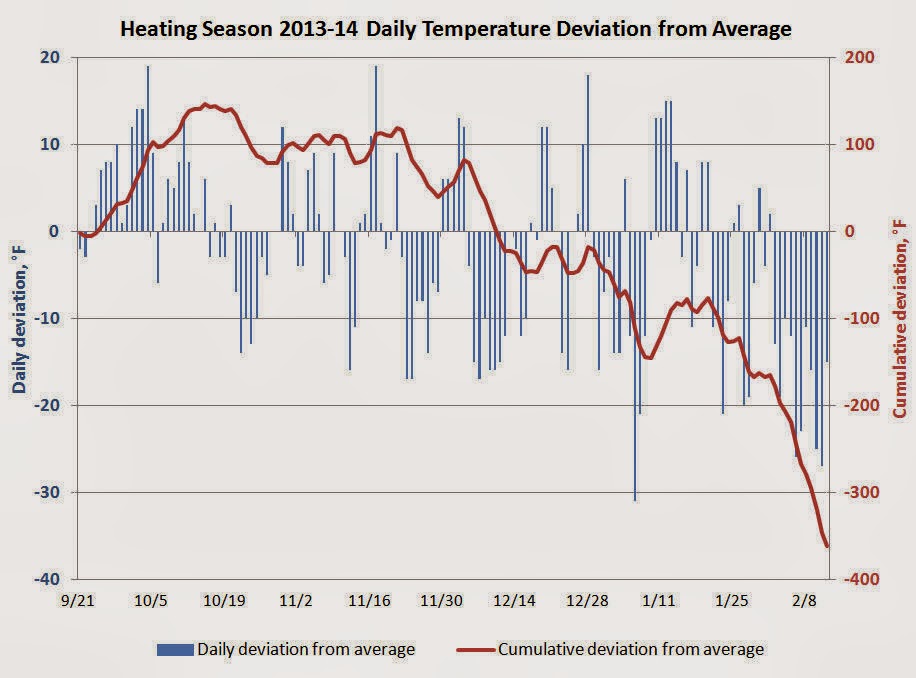 
In some respects, the entire heating season since last September looks warmer than just the winter data, primarily due to the warm weather from the end of September to the middle of October.  The cumulative deviation is even greater over this period than over the winter period, however, which means our fall season was actually colder than average despite the warm start.  Our 362 degree cumulative deviation works out to about two and a half degrees colder than average per day for the 145 days of fall and winter so far.

So, back to the question in the title, has this been a normal winter?  Yes, it has been normal in the sense that we've had some days warmer than average, and some days colder than average.  But no, it has not been normal in the sense that the temperatures have averaged much colder than the historical average so far. Winter isn't finished, however, as we have 36 more days until spring and a warming trend in the forecast. In order to finish the winter even with the historical average, each of the remaining 36 days would have to average over 9 degrees warmer than average. Plenty of people around here would welcome a trend like that!

(Editor's note: a variation of the word "average" appears 38 times in this post)

Last fall I noticed some unusual behavior just before harvest time.  The first field to be harvested in our area had a portion, but not all, of the corn removed.  Since farmers will sometimes harvest a few rows to check the moisture content before they harvest the entire field, I didn't suspect anything unusual until I noticed that the swath of corn removed cut diagonally across the field.  I'd never seen a farmer harvest that way before.  A few days later, a bulldozer arrived and pushed the topsoil into a giant berm on one side of the swath.  Clearly something other than farming was planned for that property.  It wasn't long after the topsoil was moved that other equipment appeared, and ultimately, large sections of pipe were delivered.  A little research identified the project as the Enbridge Flanagan South Pipeline that will traverse almost six hundred miles between Pontiac, Illinois and Cushing, Oklahoma. 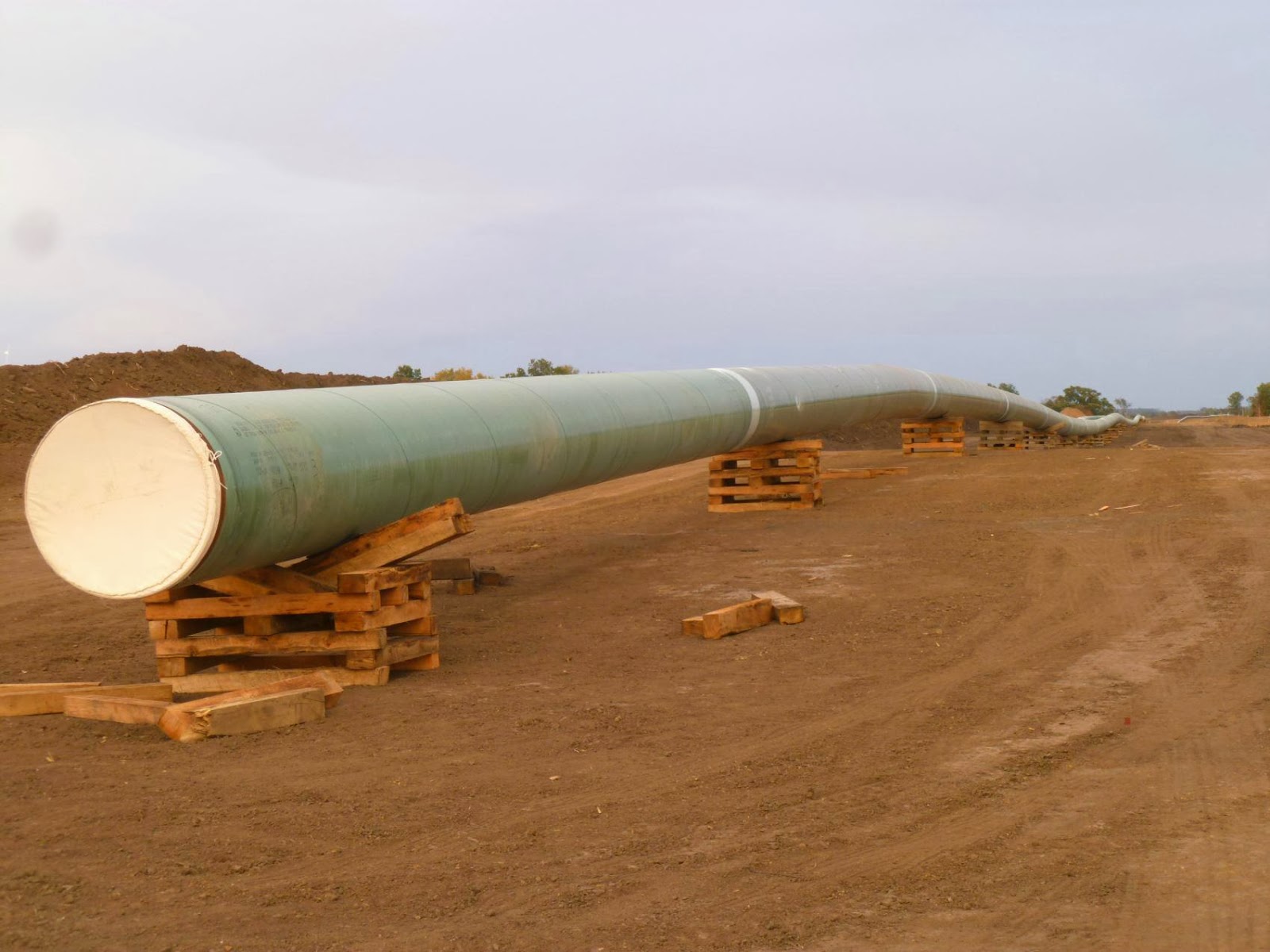 This 36-inch diameter pipe will carry 600,000 barrels of crude oil per day from oil fields in the Upper Midwest to facilities in Oklahoma which will then transfer it to refineries near the Gulf of Mexico.  The section above is nearest to our house and illustrates some of the pipe preparation before it's laid in the ground.  The pipe is supported on makeshift wooden platforms at a uniform height above grade until all the sections are welded together.  The lack of workers or active equipment in these photos is a result of visiting these sites on a Sunday afternoon. 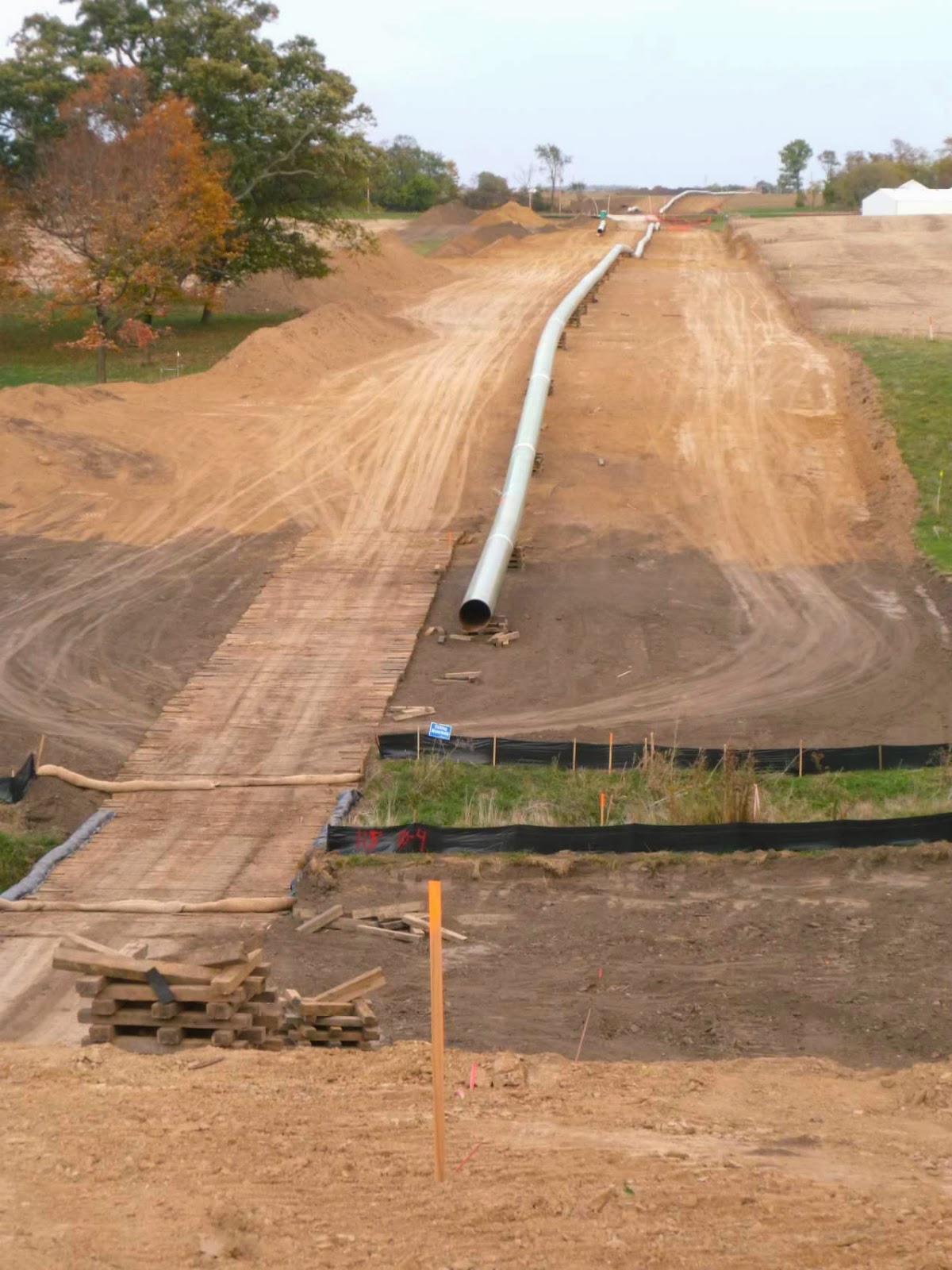 Although Illinois is relatively flat, the elevation changes along this pipeline route are significant enough to require special strategies.  In the image above a small creek is temporarily bridged and silt fences protect it from excessive soil runoff.  A long section of pipe welded and bent to follow the terrain was not welded in place like the others you see in this image, but was resting next to me on the flat ground on top of this small rise.  It appears that steeper slopes like that in the foreground require the pipe to be welded remotely to its resting place.  I don't know if they used pipelayers to move that section into place or if some other equipment was used. 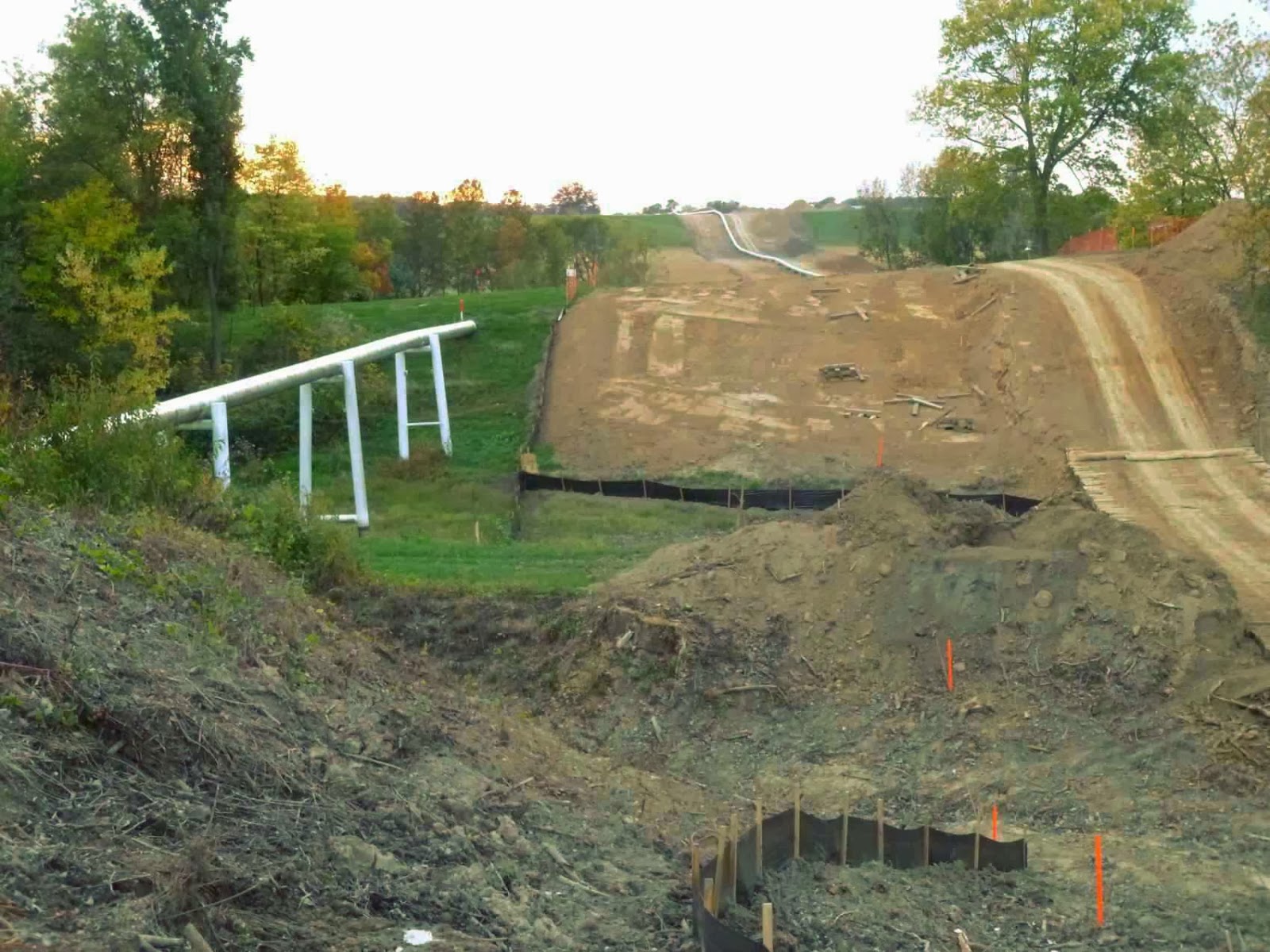 A few miles from our home, some rolling hills forced another pipeline to span this dip as an elevated structure instead of following the terrain.  I'm not sure, but I believe that pipeline is Enbridge's Spearhead crude oil pipeline that follows the same route as Flanagan South, but is only 22-24" diameter.  Enbridge purchased the Spearhead line about ten years ago, which originally carried oil from the oil fields of Oklahoma and Texas to refineries near Chicago.  By 2006, Enbridge had reversed the flow to allow more Canadian oil to reach refining facilities in Oklahoma, and optionally, the Gulf Coast. Here's a view of a couple "hillside" sections welded together and waiting to be moved into place.  I'm not sure, but I assume the straight section on the left is close to where it will be buried, while the other two sections to the right will require more manipulation before they come to rest. 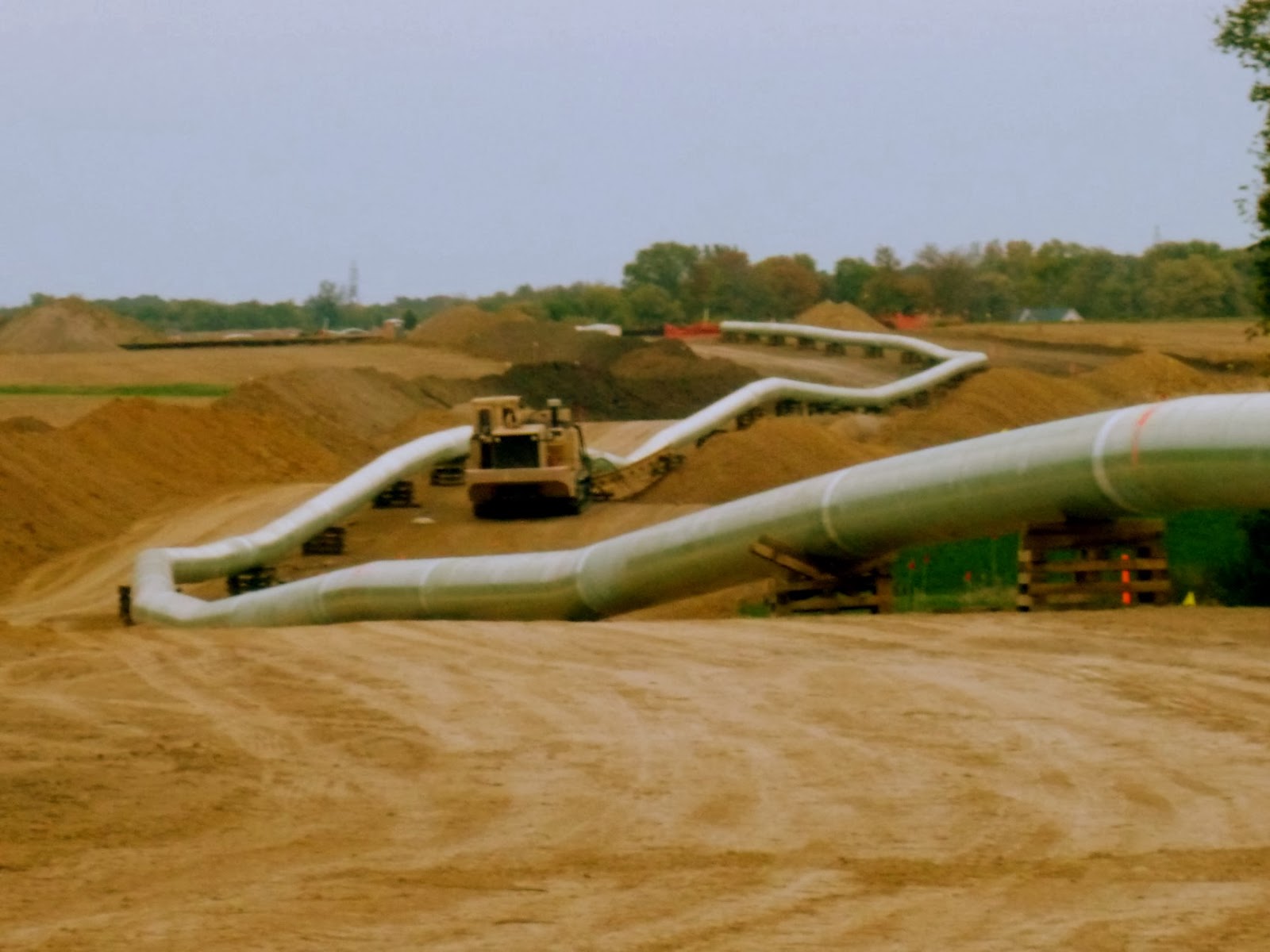 A little further east I found this interesting view that illustrates the winding and not-quite-flat route the pipeline traverses.  Next time I'll have more photos and videos of the process of laying the pipe in the trench that will naturally include more people and activity.  Even at this stage, the amount of progress made in just a few weeks is impressive.