This Lopi Endeavor wood burning stove was already installed in our house when we purchase it in 2007, but we've only used it sporadically since then.  Even so, it has been valuable enough to us that we wanted to include it in our plans to remodel the basement. 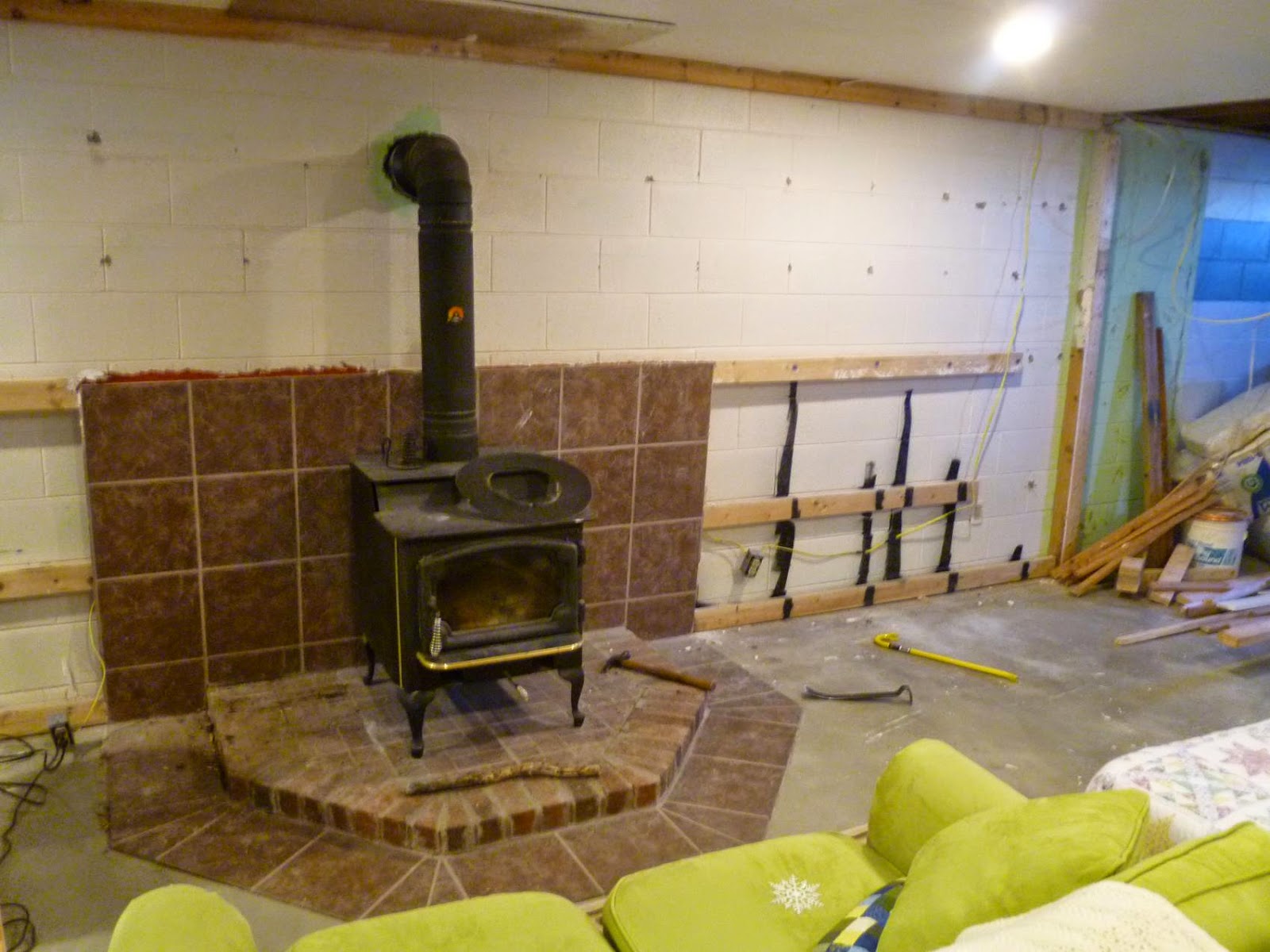 Even though much of the previous wall treatment was removed when I took the photo above, one can still appreciate the brick and tile surround the previous owner used as heat and debris protection on the wall and floor.  The platform under the stove is a small concrete pad topped with tile and ringed by brick.  Initially, I intended to leave the core of that platform and reshape and cover it with a different tile, but the further I proceeded, the more that platform appeared to have only one purpose: stubbing toes. 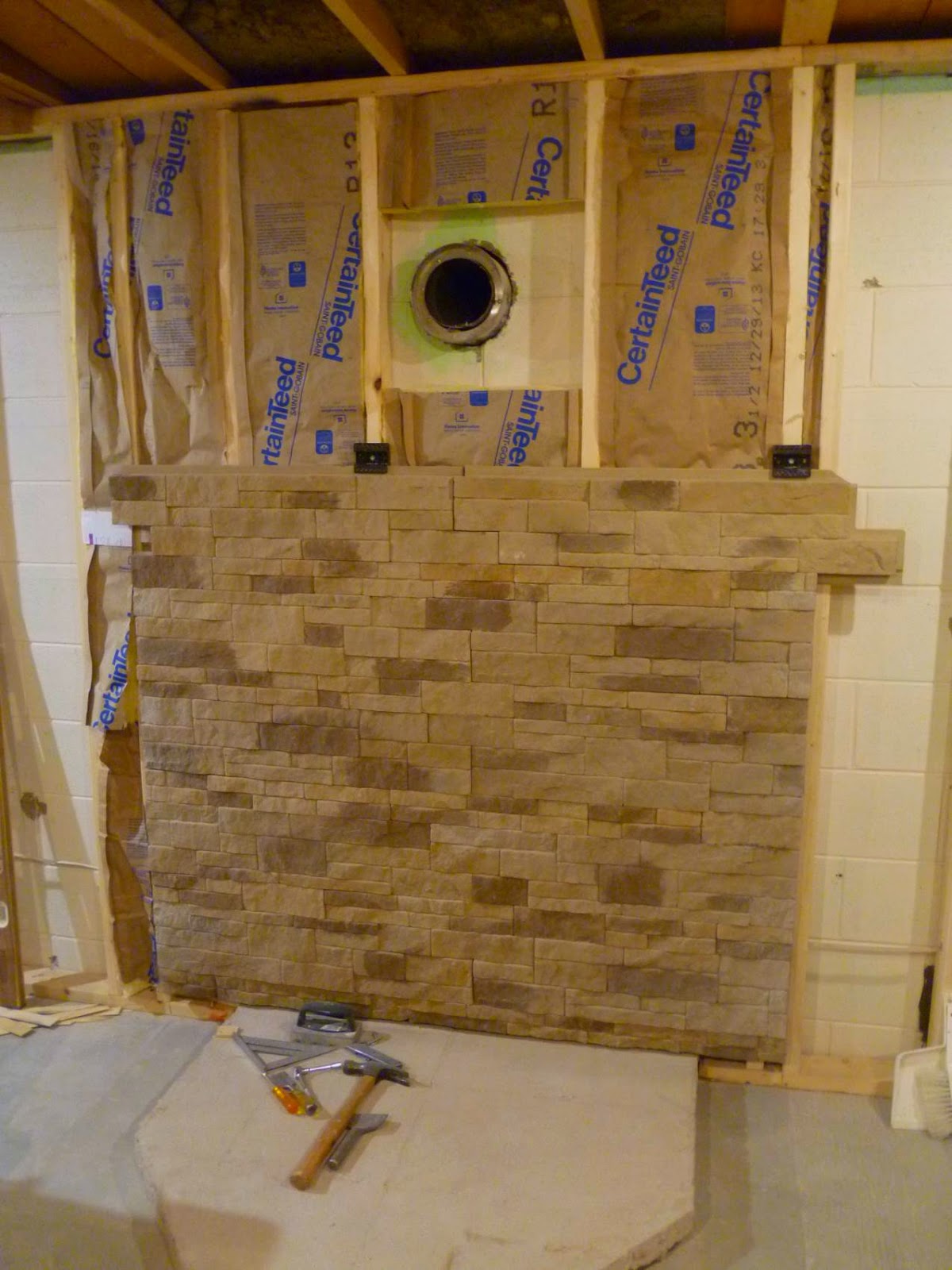 The updated version of the surround uses Ply Gem Durata Mortarless Stone as the primary non-combustible wall surface.  My skills with stone and mortar are very limited, so I was happy to find this mortarless product that satisfies my aesthetic requirements.  As you can see, we included insulation behind the stone to limit the heat loss through the stone and avoid any potential issues with a significant temperature gradient in the wall.

In this shot the top several rows of the stone have not been cut to size, and one can observe the plastic brackets used to anchor the rows of stone to the wall. 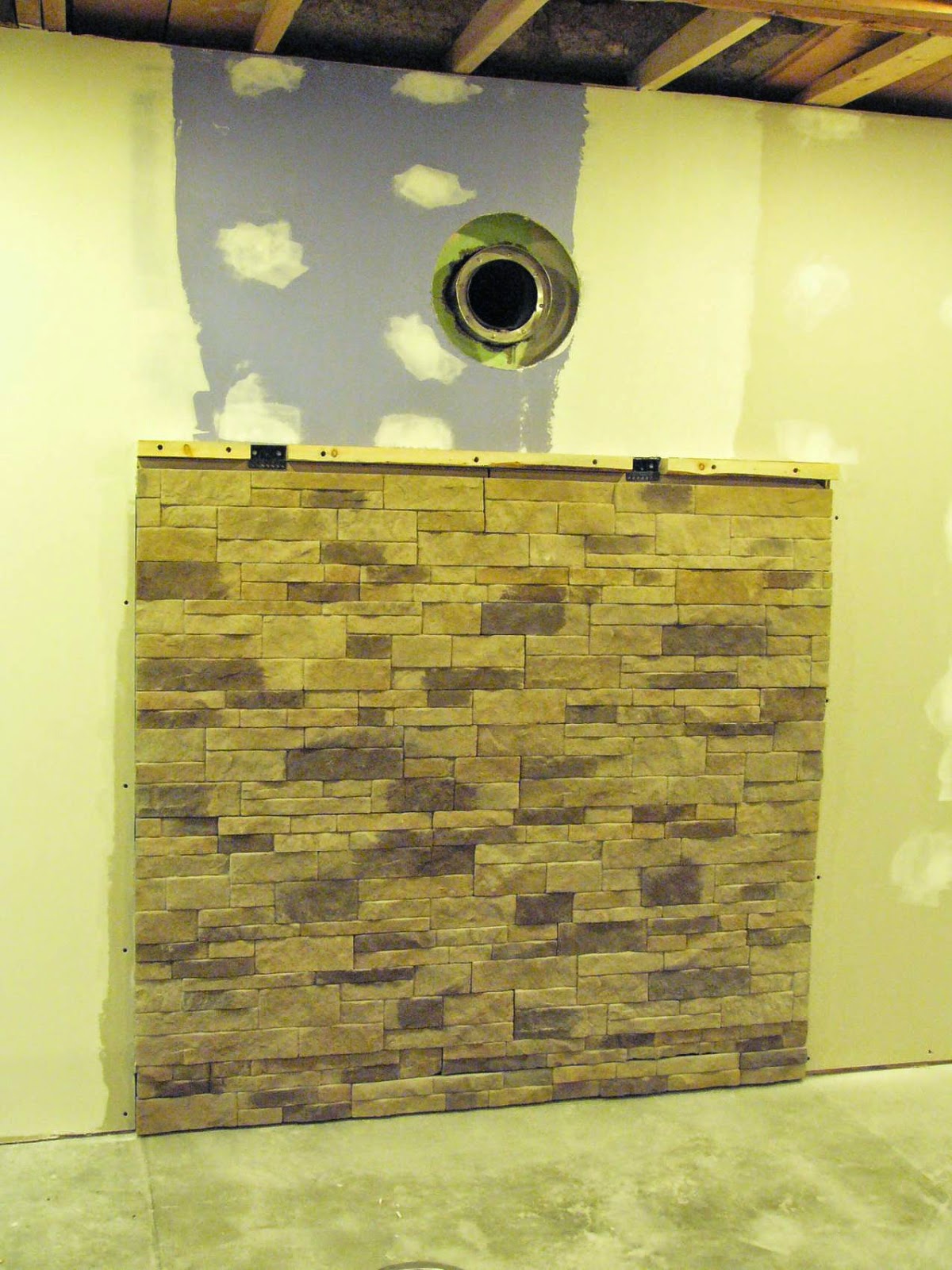 Several provisions were included before the gypsum board was hung in order to make it easier to trim around the stone, and insure the wall was sound. 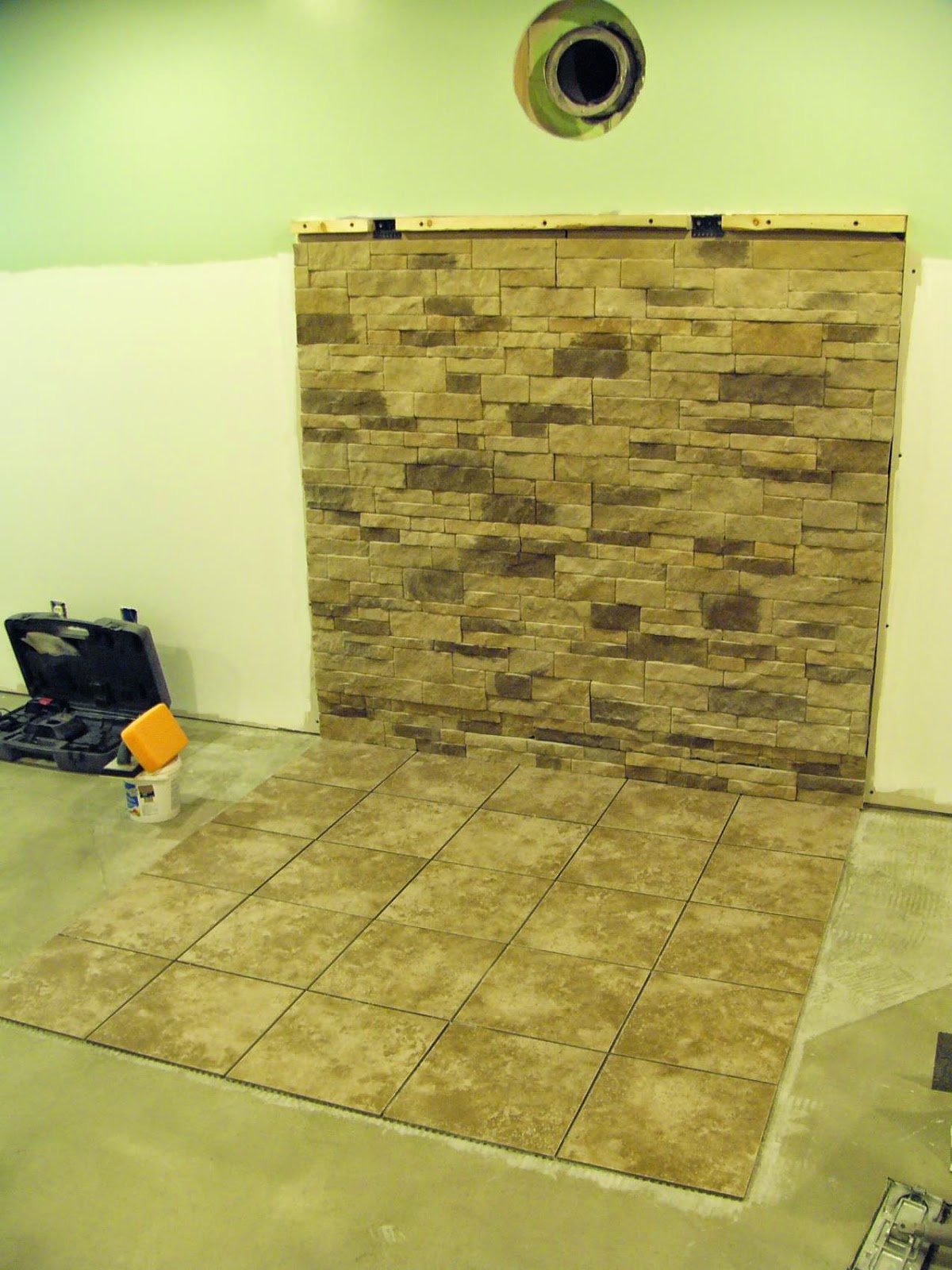 As you can see in this image, the tile base for the stove was affixed directly to the concrete floor so the possibility of stubbing toes on that feature would be minimized.  This image was taken shortly after the tile was laid, and before it was grouted.  Our wall paint colors are also visible in this shot, although I can't vouch for the camera accurately capturing the shade of the green on the upper portion of the wall. 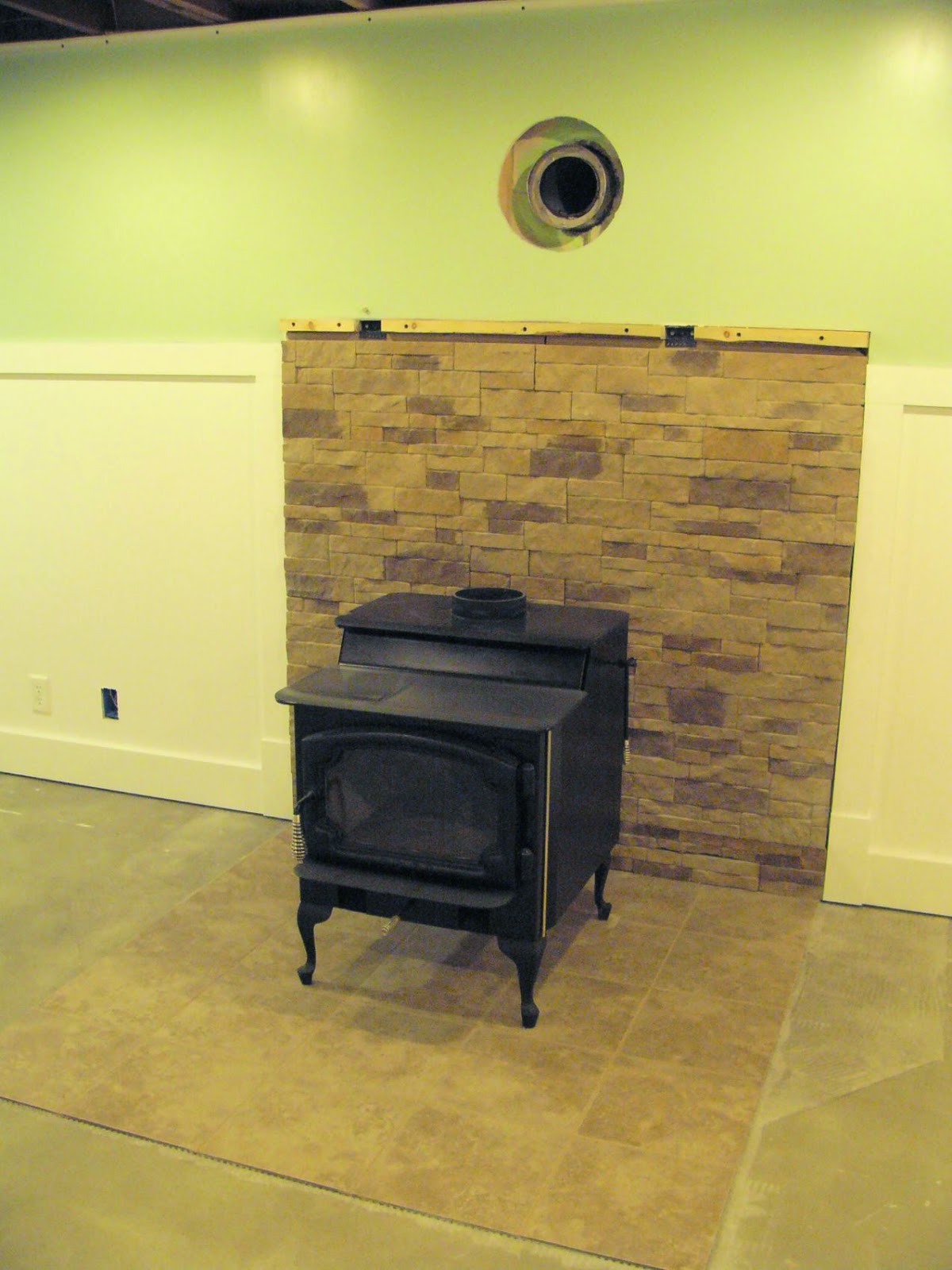 This final image shows the tile after grouting, most of the trim on the wall, and (obviously) the stove set in place.  Gretel cleaned up some rust and chipped paint on the stove before we repainted it, since it could be difficult to paint it in the future.  Although it has a coat of dust on it in this shot, it looks much improved.

As is typical, I learned a few things while mounting the stone, setting the tile, and repainting the stove, such that I could probably improve each of those activities in the future.  But for now, I'm content with this section of the basement and look forward to the warmth the stove will radiate this winter. 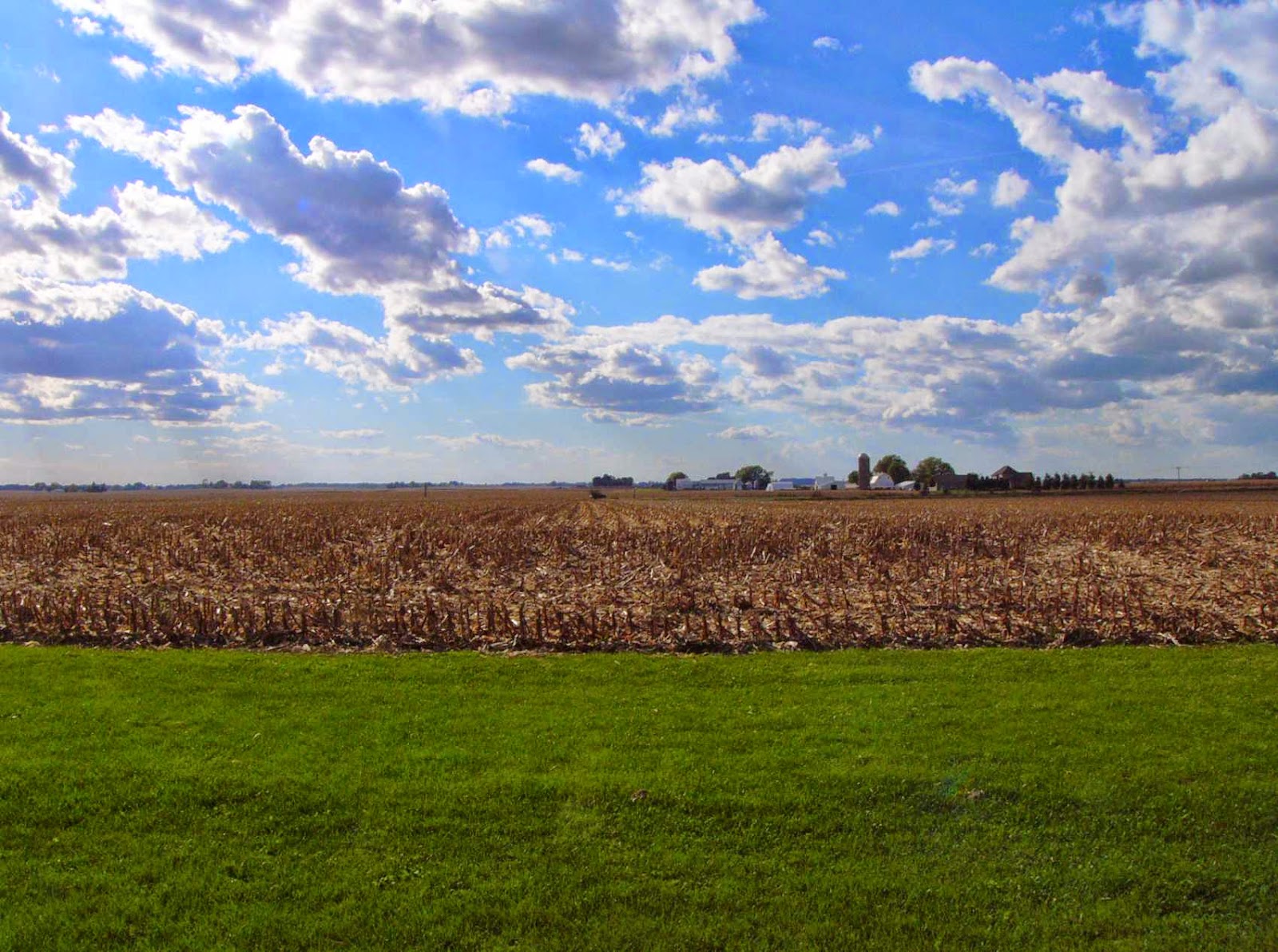 Farmer Wagenbach harvested this year's crop while I was at work on September 25, and this photo was taken a few days later.  No word yet on how the yield this year compared to other years, but to my amateur eye, I'd say it looked pretty good.  The crop was in the field for about 21 weeks, and experienced about 8% more growing degree days than normal this summer.  Our rainfall was also noticeably above average, which seemed to do more good than harm.

The 39 acres behind our house will now rest for about seven months until Farmer Wagenbach plants the crop of 2015.  Make sure to check back next spring for all the details! 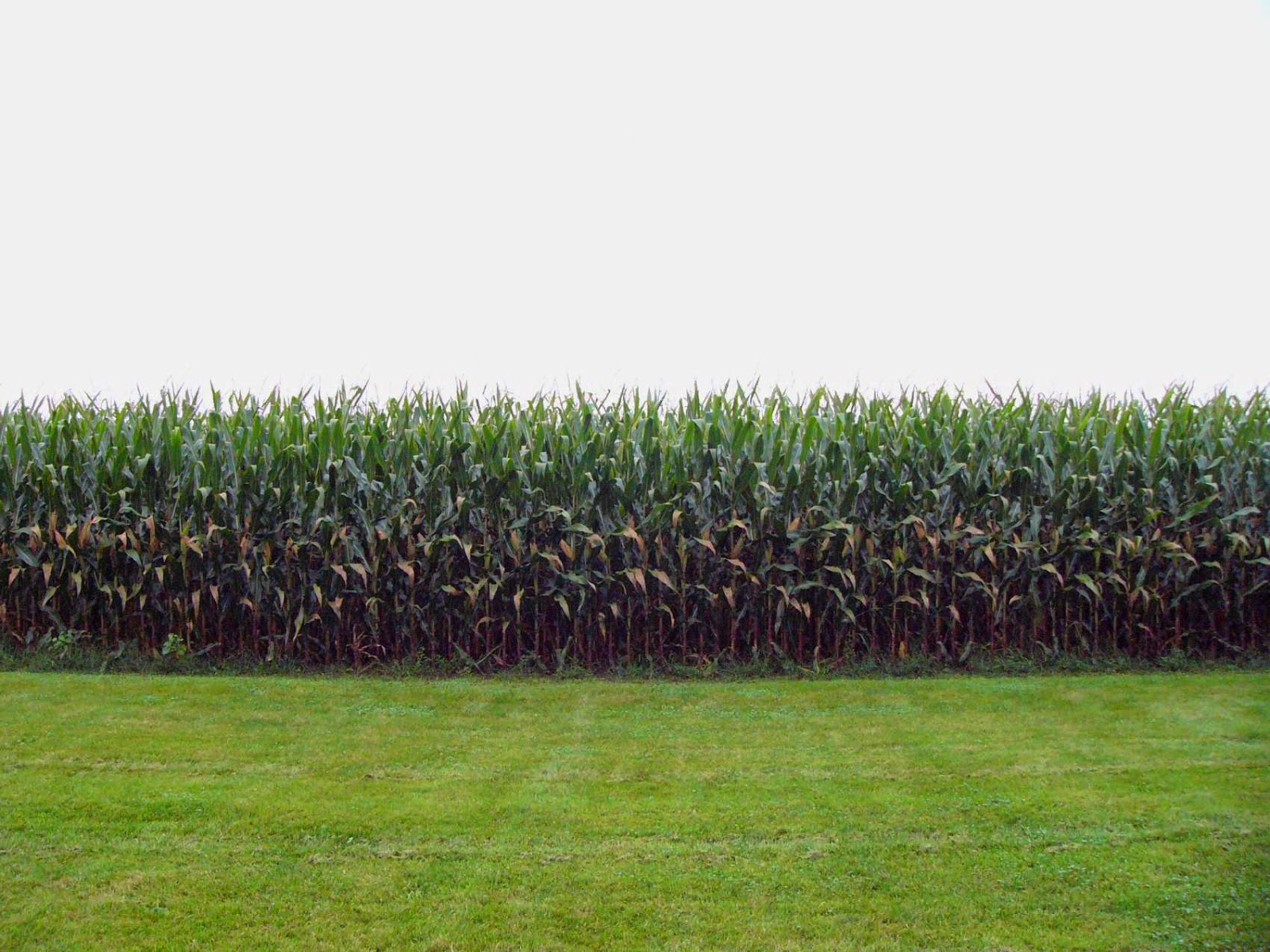 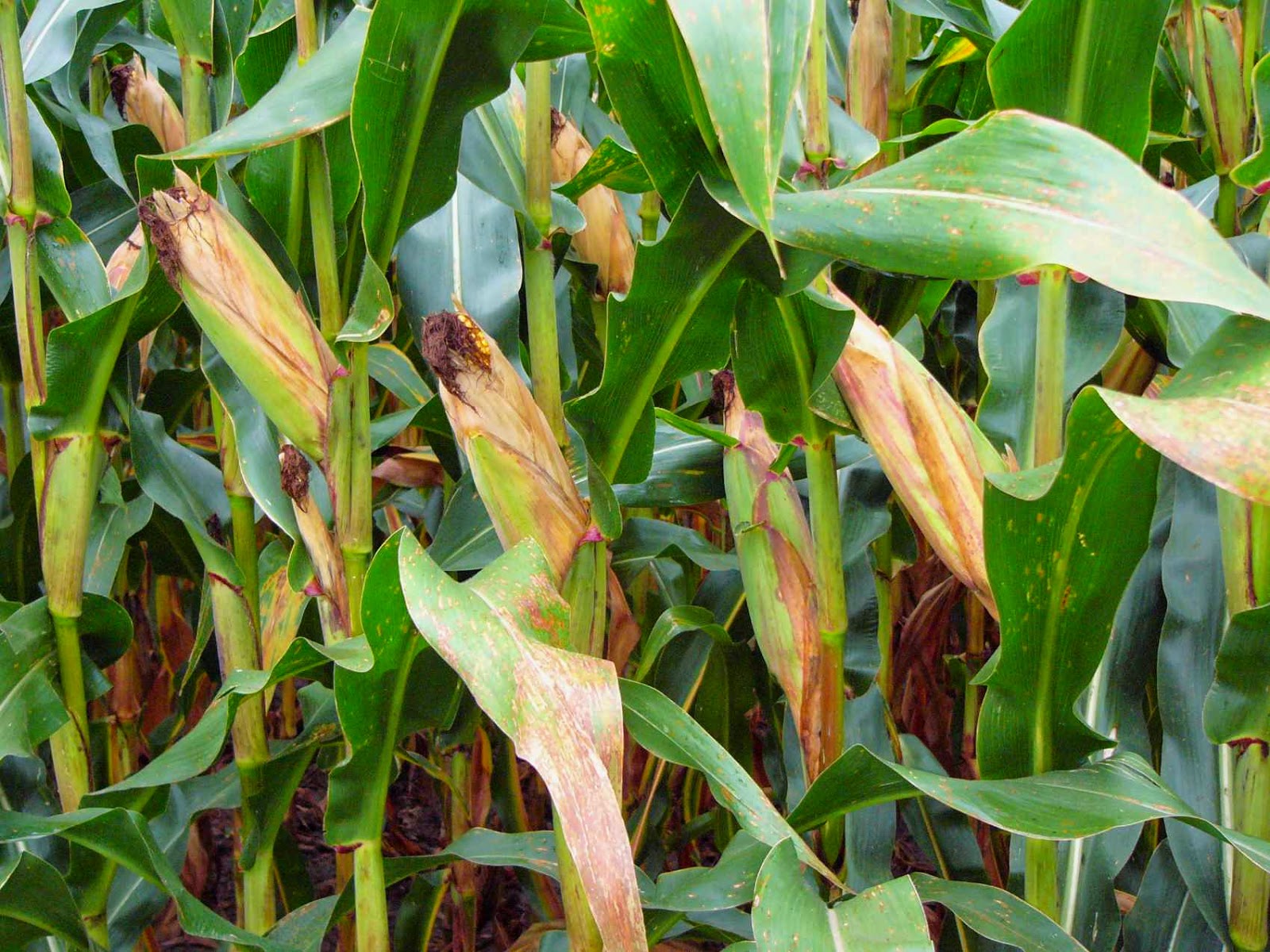 Although the ears were showing indications of drying, the stalks and leaves seem to be late in drying out this year.  We had 45% more growing degree days in the week preceding this photo, which probably accelerating the maturing and drying processes. 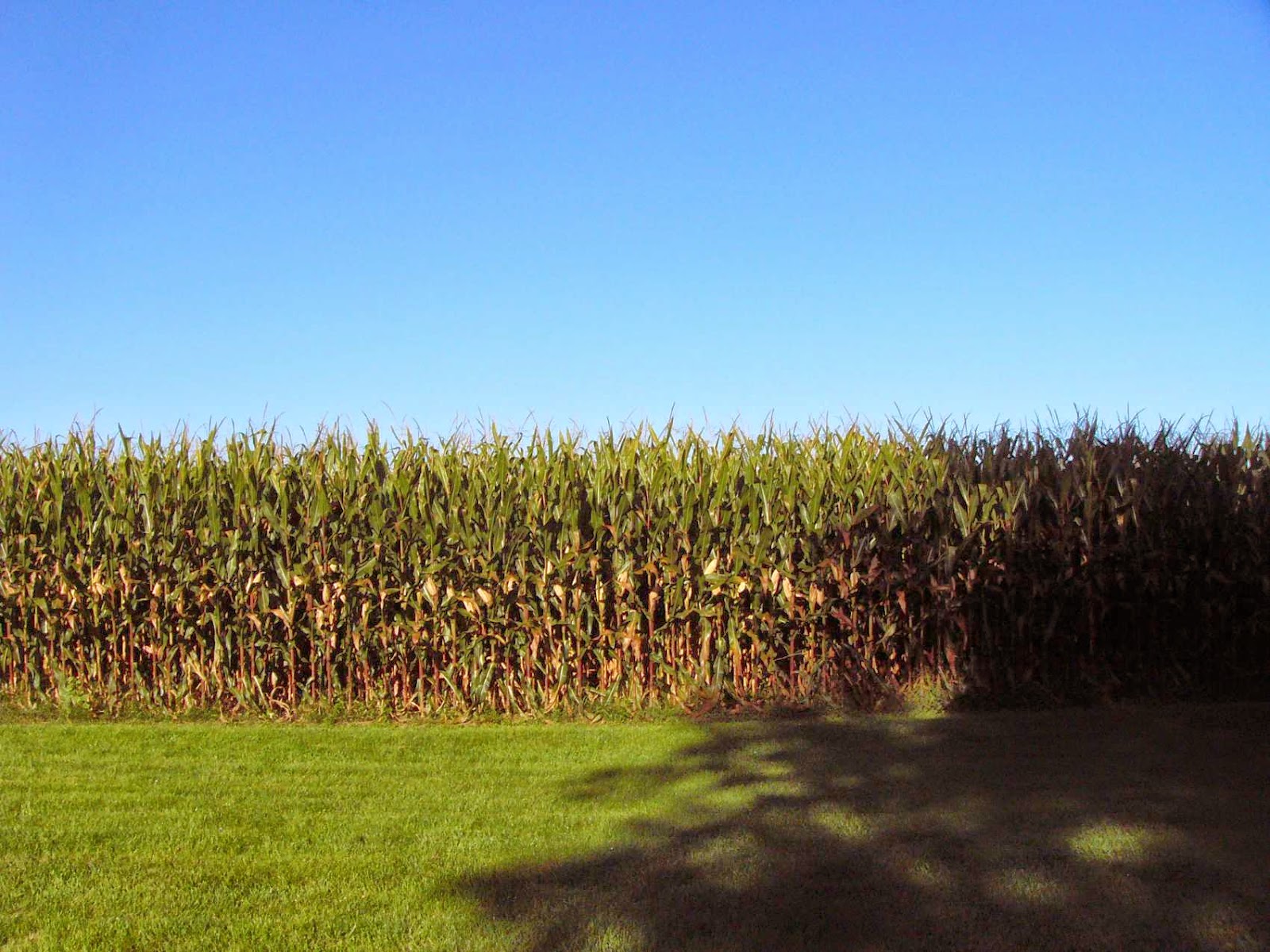 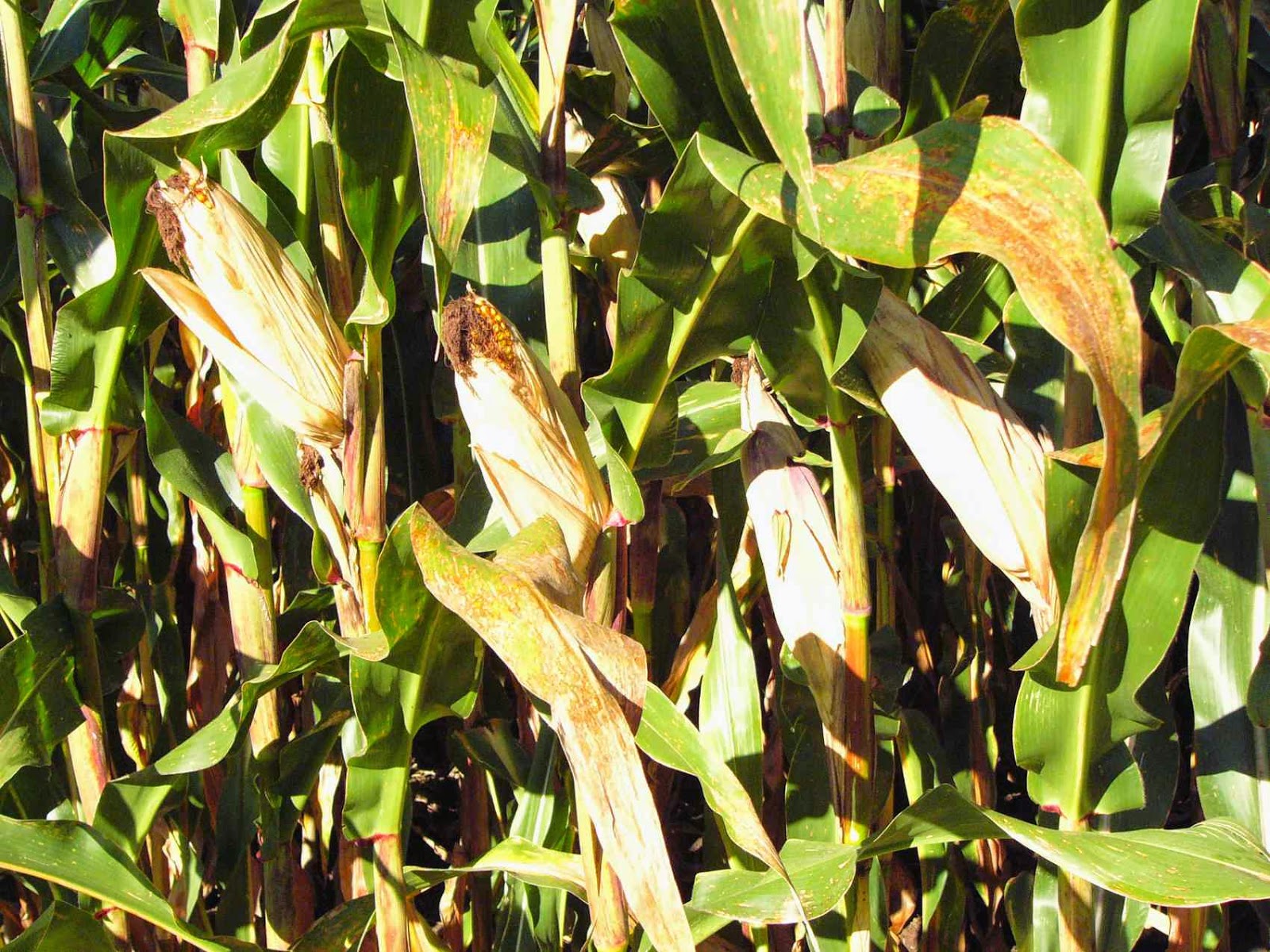 Warm weather continued until this photo was taken, as the week accumulated 33% more growing degree days than typical, and the increase in plant drying was obvious. 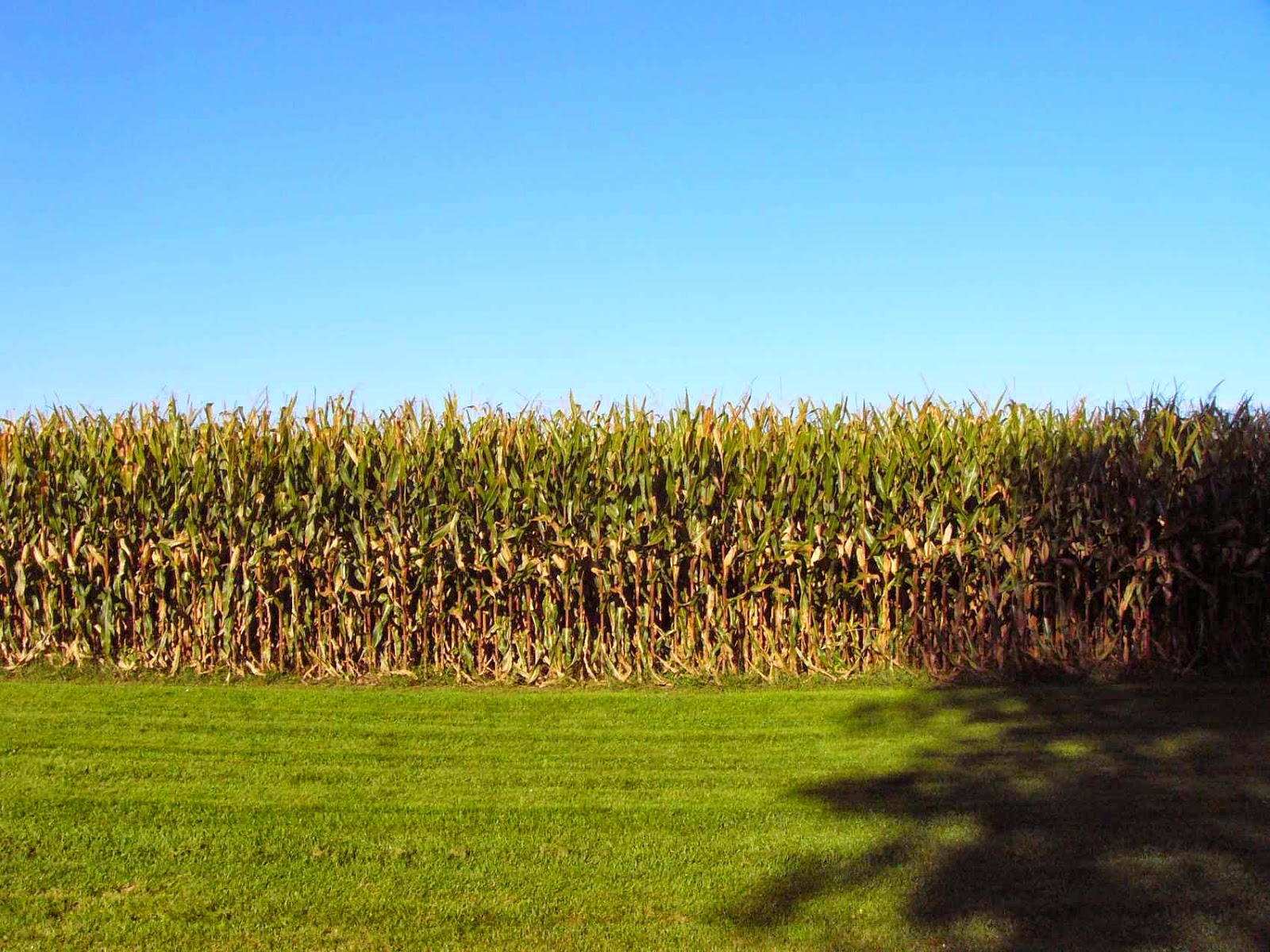 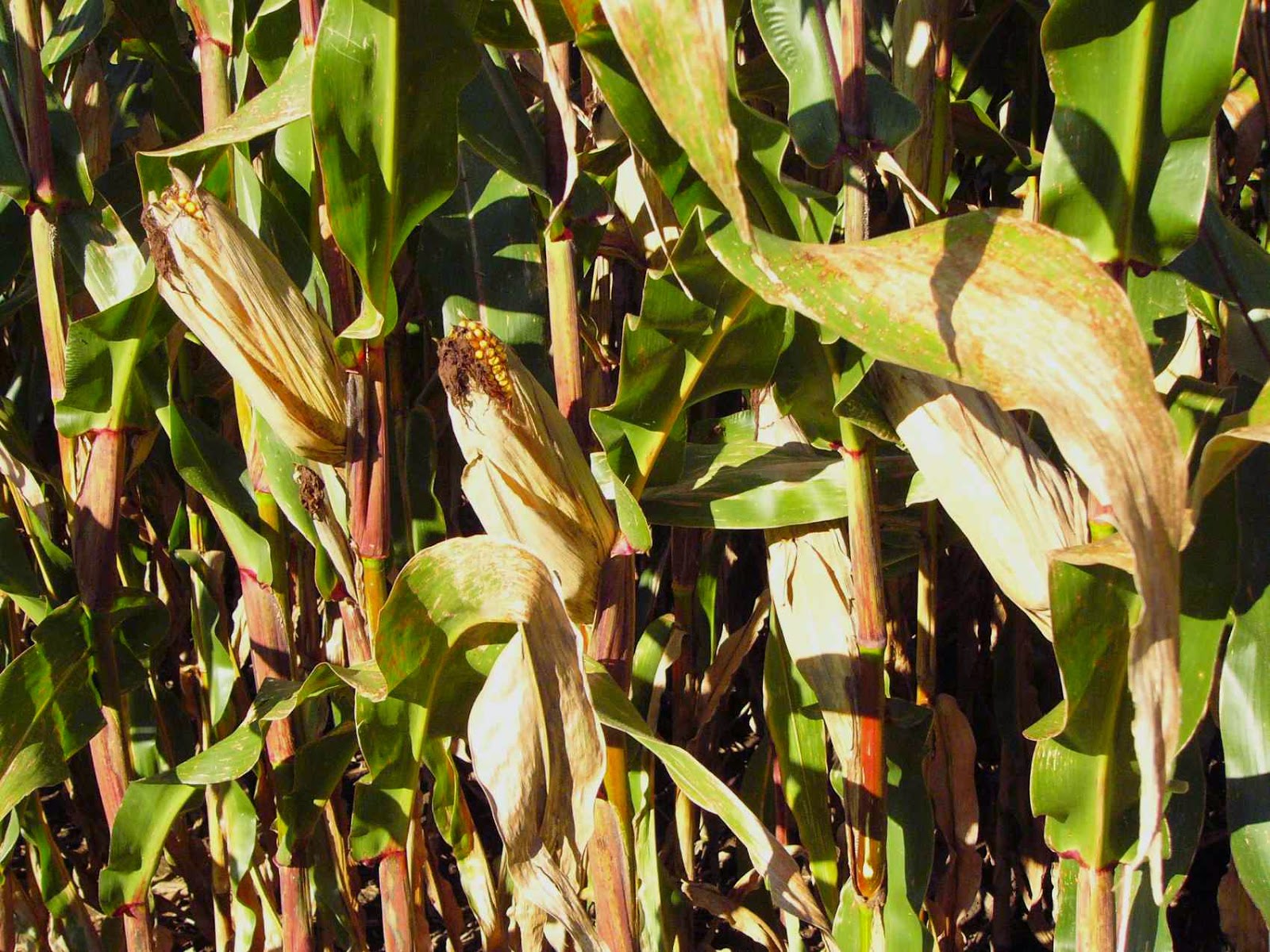 Temperatures cooled significantly on September 11, and stayed below normal for eight days resulting in 84 growing degree days for the week compared to the normal 119.  The change in dried plant matter from the week before was subtle, but evident. 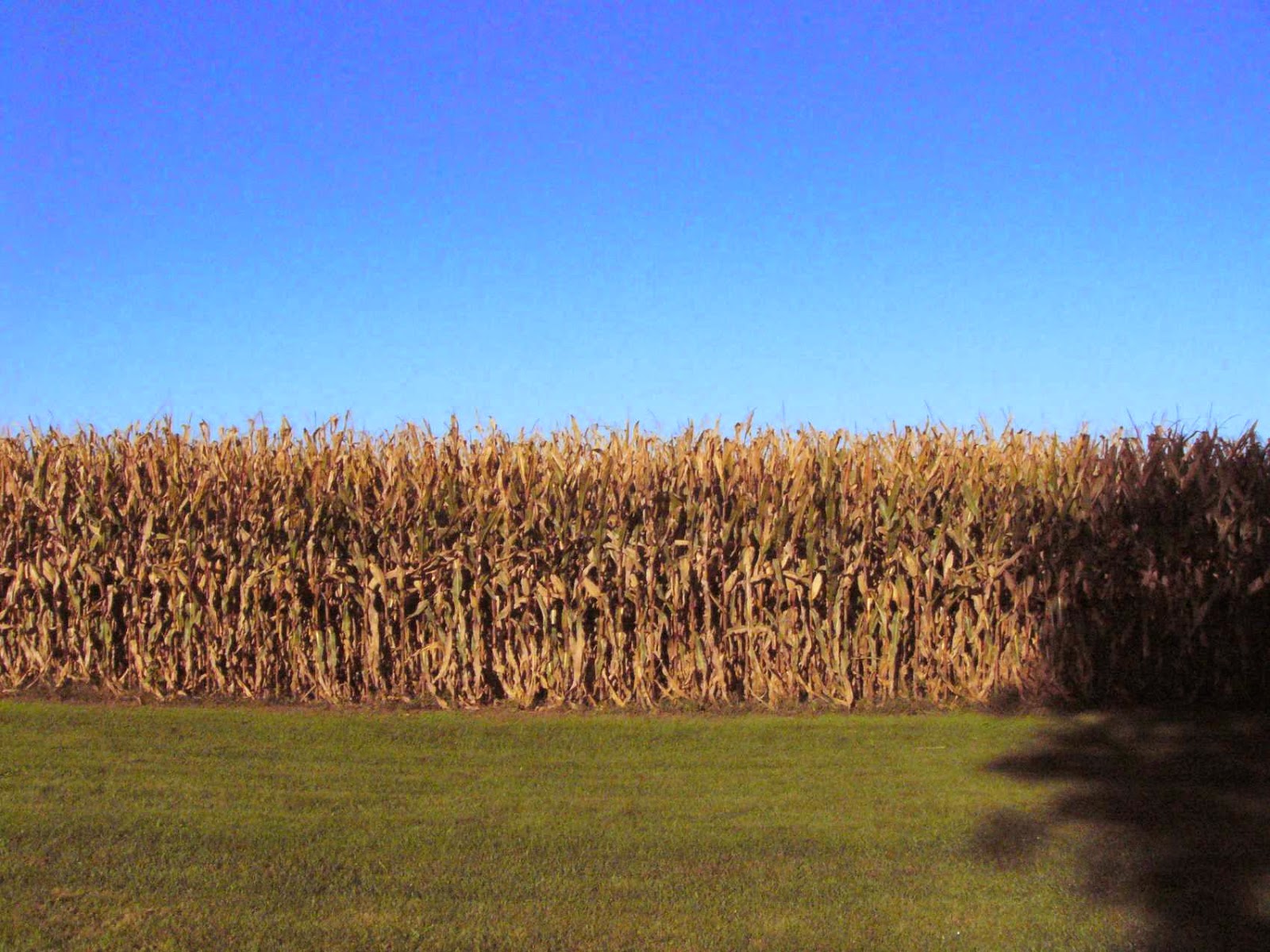 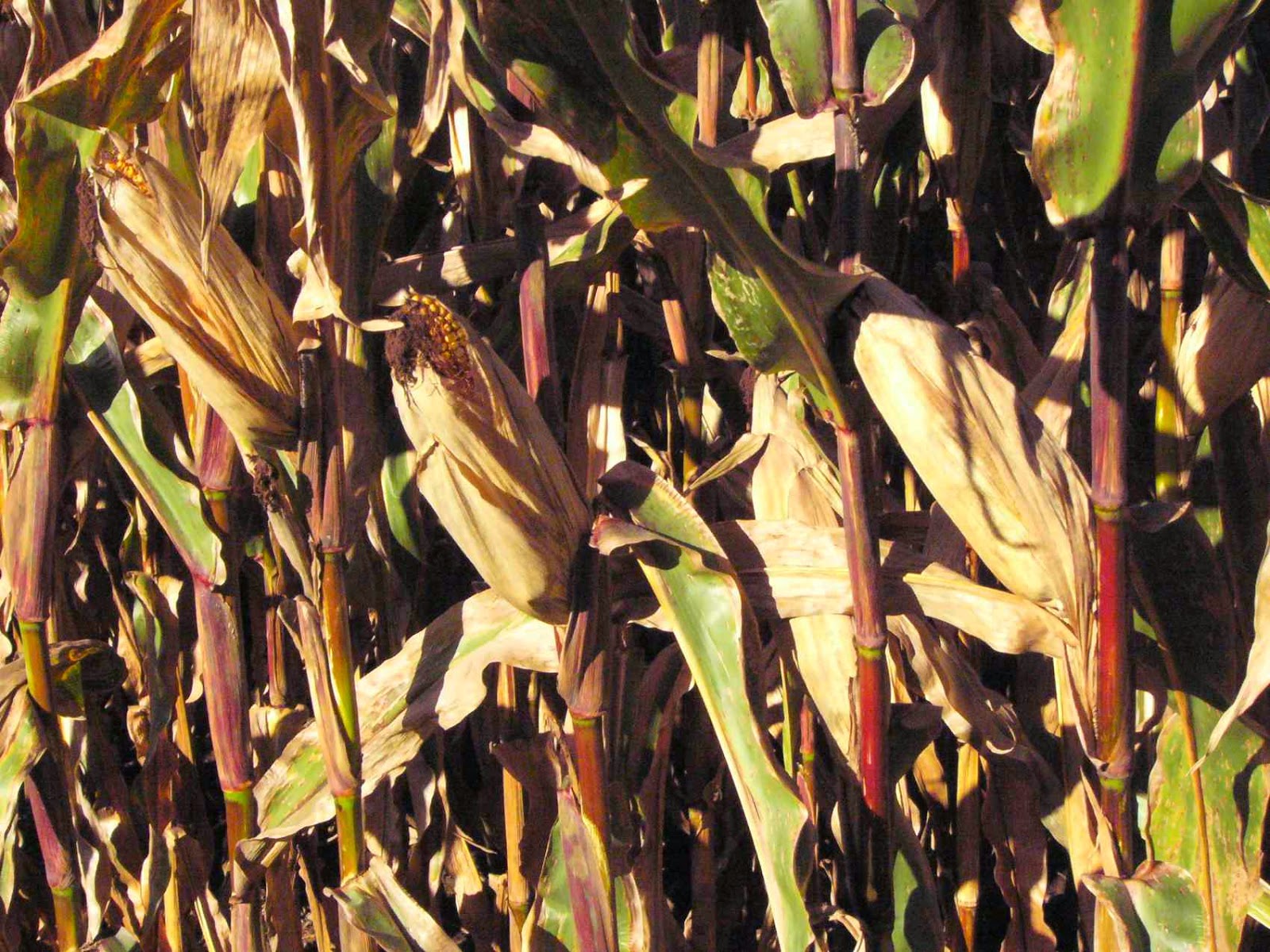 Even though the cool weather continued most of the week before these photos, the visible drying of the plants stands in stark contrast to the week before.  Growing degree days were only 80% of the normal total, but the crop seems close to harvest, and several neighbors have begun harvesting already.