Our neighbors had good success last winter harvesting maple sap and converting that to syrup, so we all anticipated the products of this year's harvest. Even though the trees were tapped a week earlier than last year, the weather this year has not been as ideal for producing lots of sap. 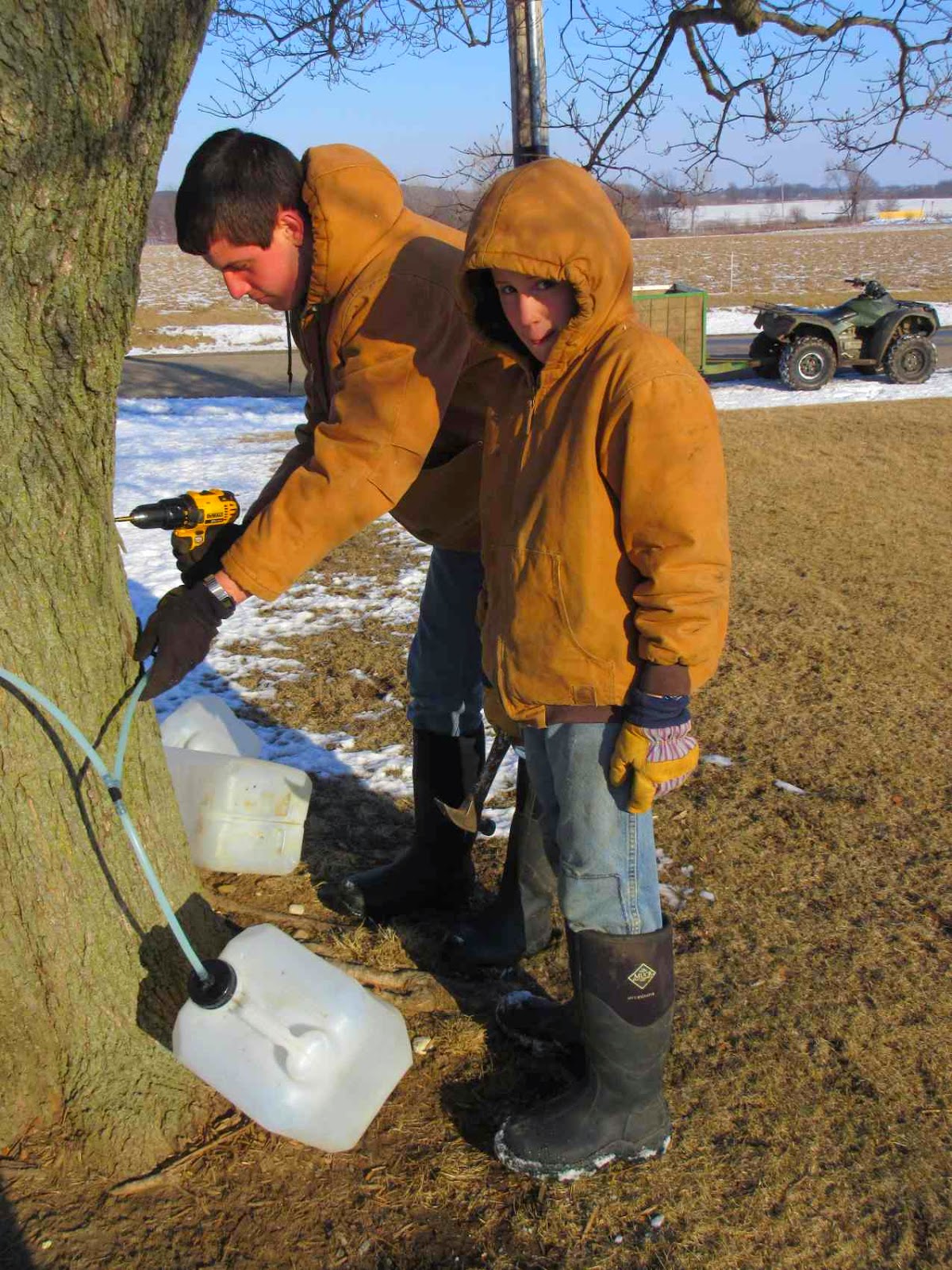 The sap flows best when nighttime temperatures are well below freezing, and daytime temps are well above freezing, preferably with some sunshine thrown in. Prior to March 6, the temperatures tended to be too cold, but the forecast for that day and those following looked promising enough to put Philip and his sidekick Josh into action. I didn't see Josh helping with the tapping last year, so I presume he was in training when they stopped by our house this year. In this shot it appears I distracted Josh from his responsibilities. 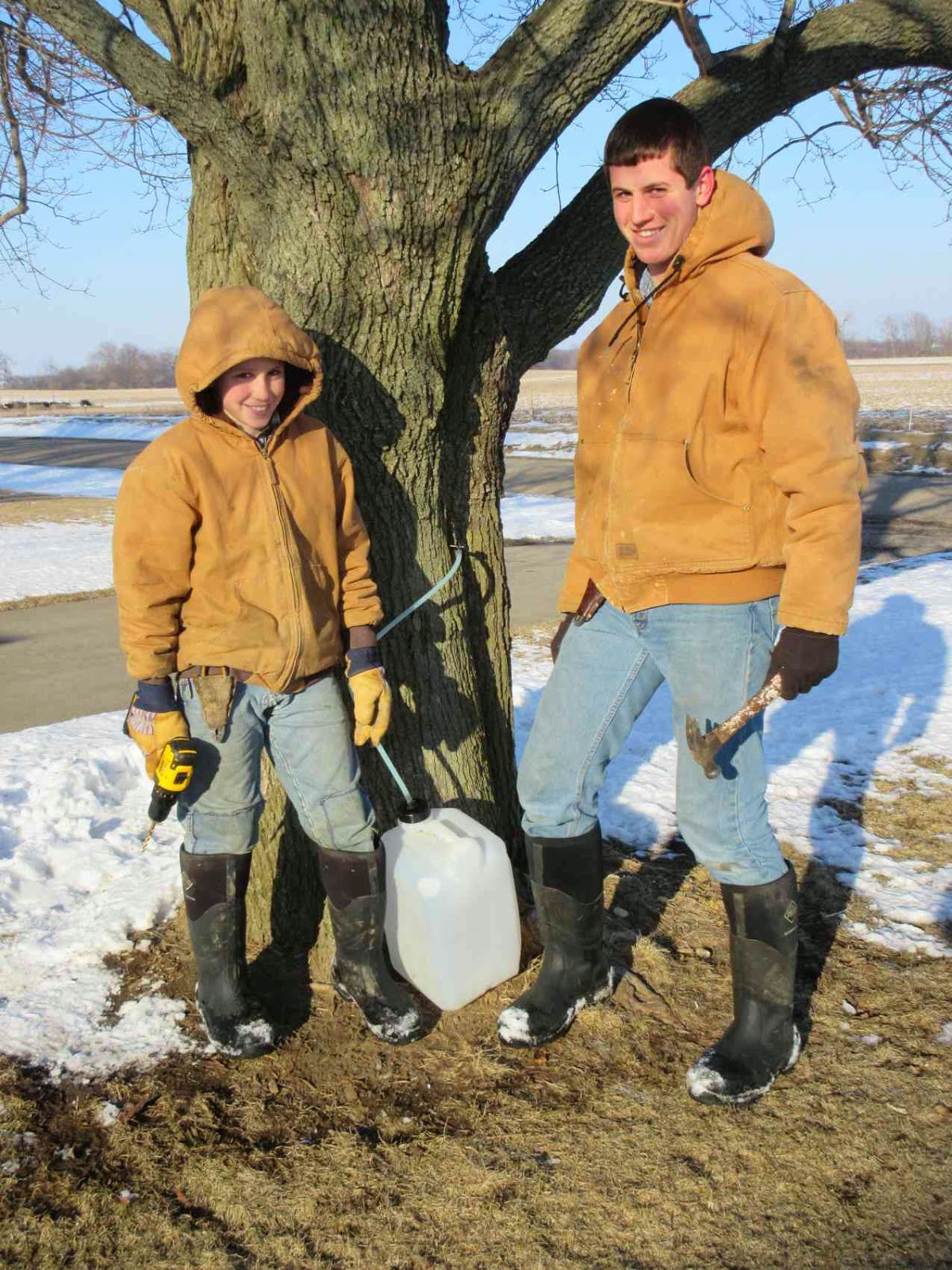 With all three of our trees tapped, the guys were ready to move on to the next target. 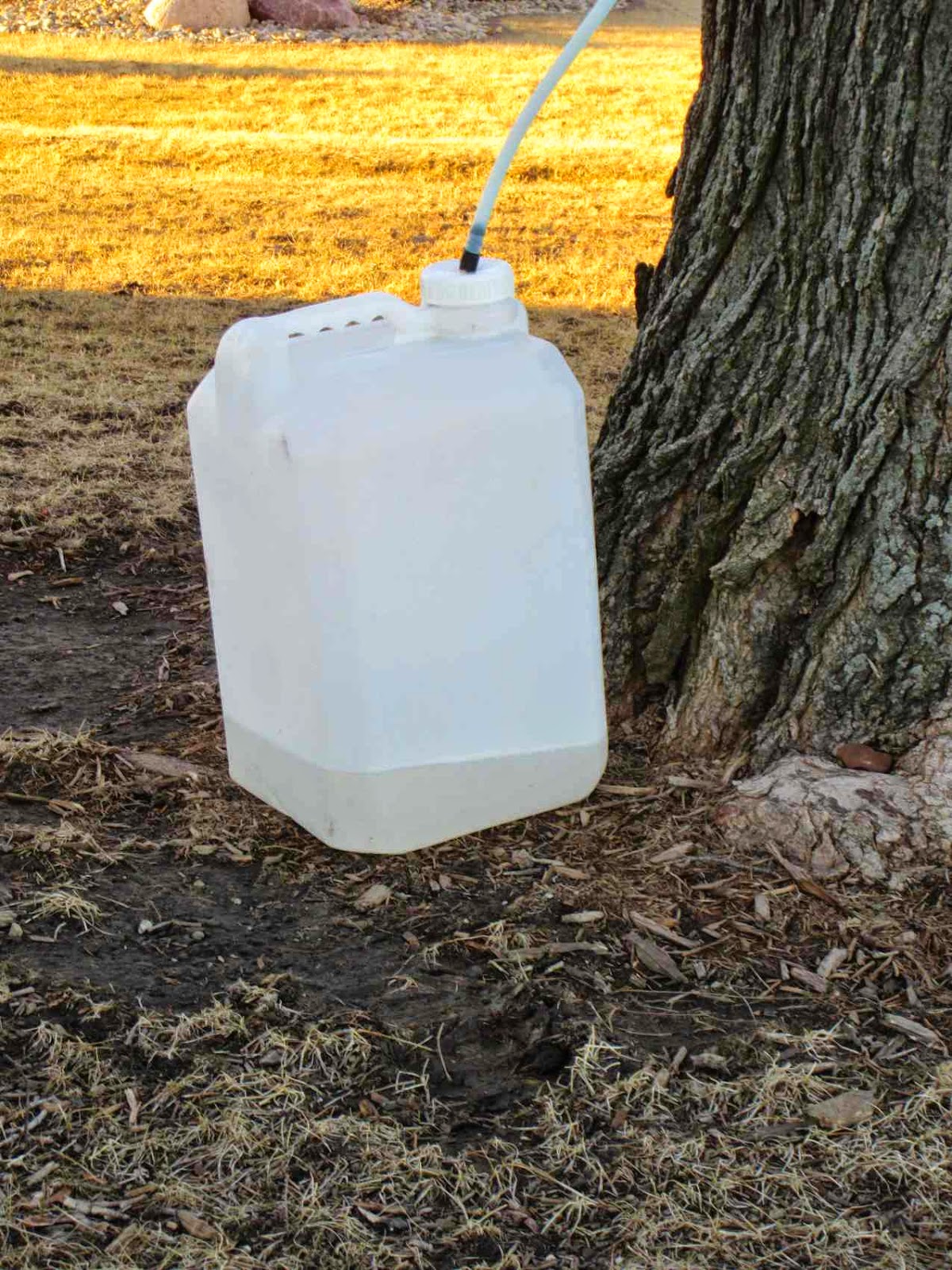 Unfortunately, the weather has tended to be too warm most of the nights over the last two weeks, so the sap hasn't been flowing as well as it did last year. This picture shows the first 24 hours of production on one of our trees that had two taps running into this container. The low temperature that first night was 29°F while the high the next day was 51°F. There appears to be a little less than a gallon in this jug since I think the container holds about 5 gallons when full. 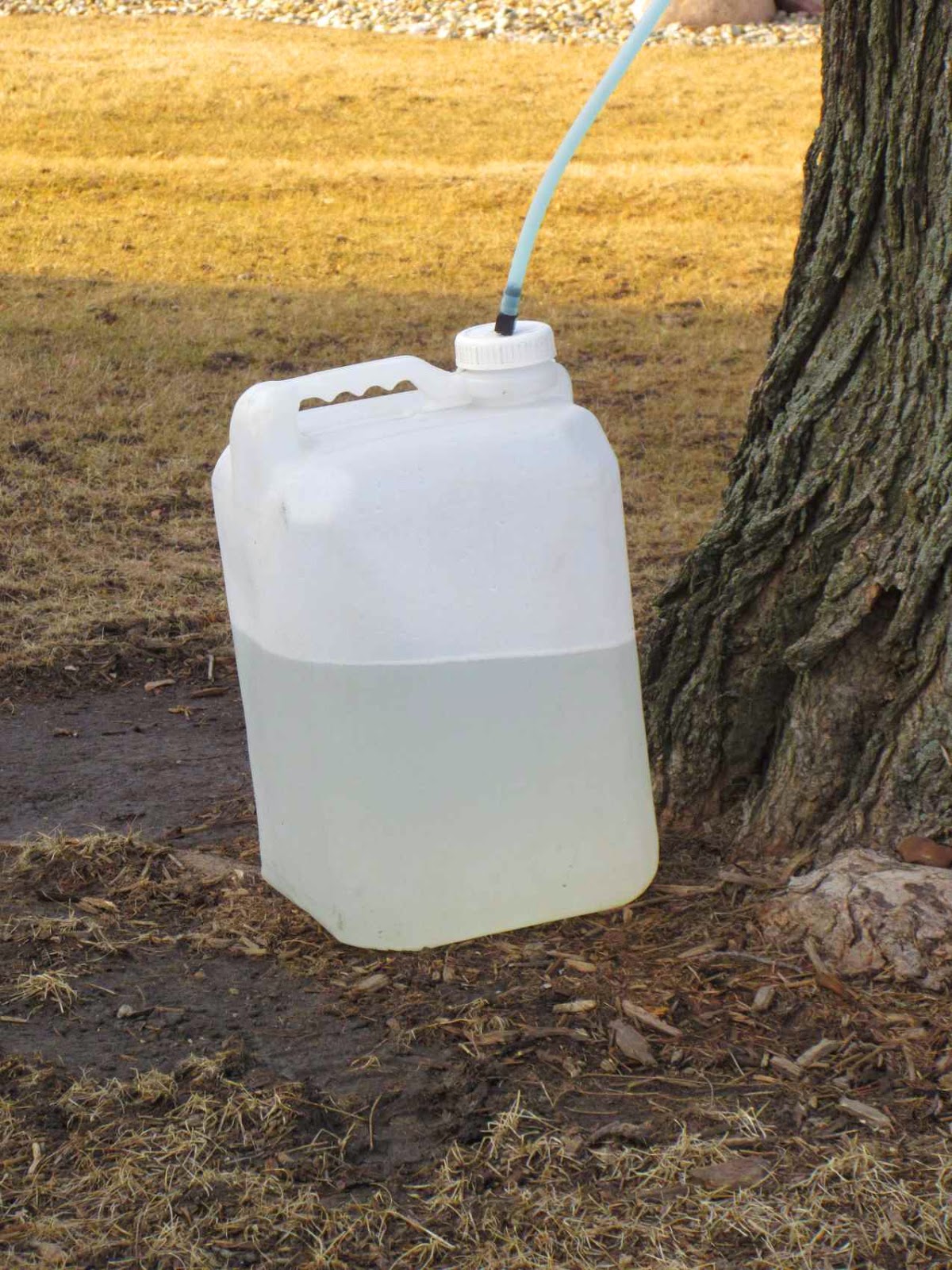 After 48 hours the container appears to be over half full. The low hit 27°F the night before, and 51°F again during the day, so conditions were sufficient to keep a decent flow of sap moving.

We've had a few good days since, but more poor days than good ones so far. It appears that the sap production may be lower than last year's harvest, which means the syrup may be in shorter supply. Our neighbors have boiled down a couple of batches of sap in the last two weeks, producing about 9 gallons of syrup which is a far cry from last year's total.  Although the near term forecast doesn't look ideal, the maple syrup season may not be done yet!

Posted by Mr. Riggenbach at 9:51:00 PM No comments: Links to this post

Once every century our calendar and clocks order themselves in such a way to duplicate more than just a few digits of pi (the number representing the ratio of a circle's circumference to its diameter). Using American dating format, today's date is 3-14-15 which is the first four digits (not including the 3 on the left side of the decimal), and only occurs every 100 years. If one includes the time of day, we could represent 9:26:53 which would give us another 5 digits.  Since seconds can be represented with fractional parts, we could technically represent an infinite number of pi digits: 3-14-15 9:26:53.589793238462643383... I think you get the idea.  We'll stop at nine digits today and be happy with that.

To celebrate, we ate three pies for supper this evening as shown in the photos below. 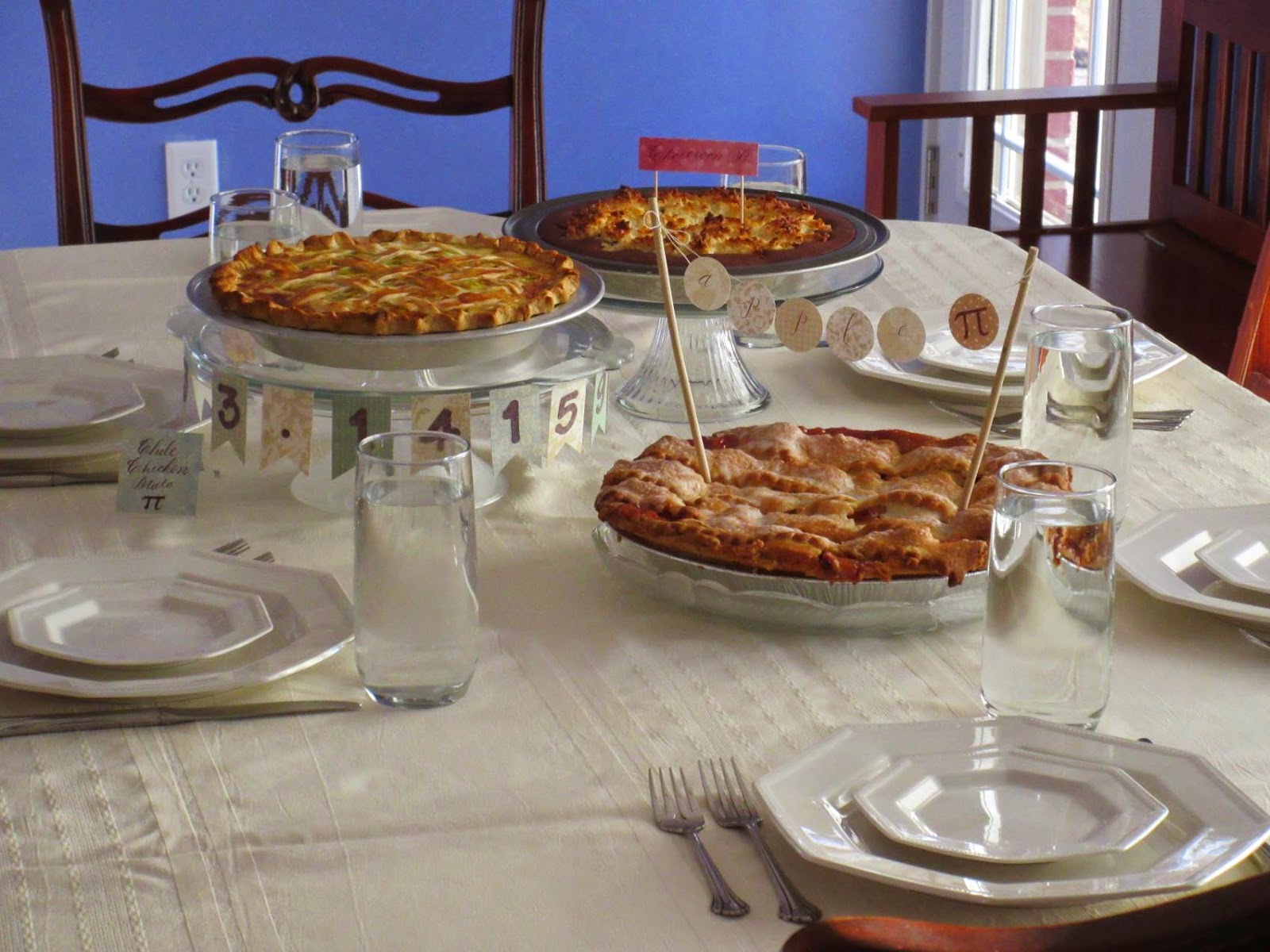 The overview of the table before we began this evening.  Not visible in this view is the bunting that crossed the room five times. It added an air of festivity to the celebration, but alas, it wasn't directly related to the number pi. 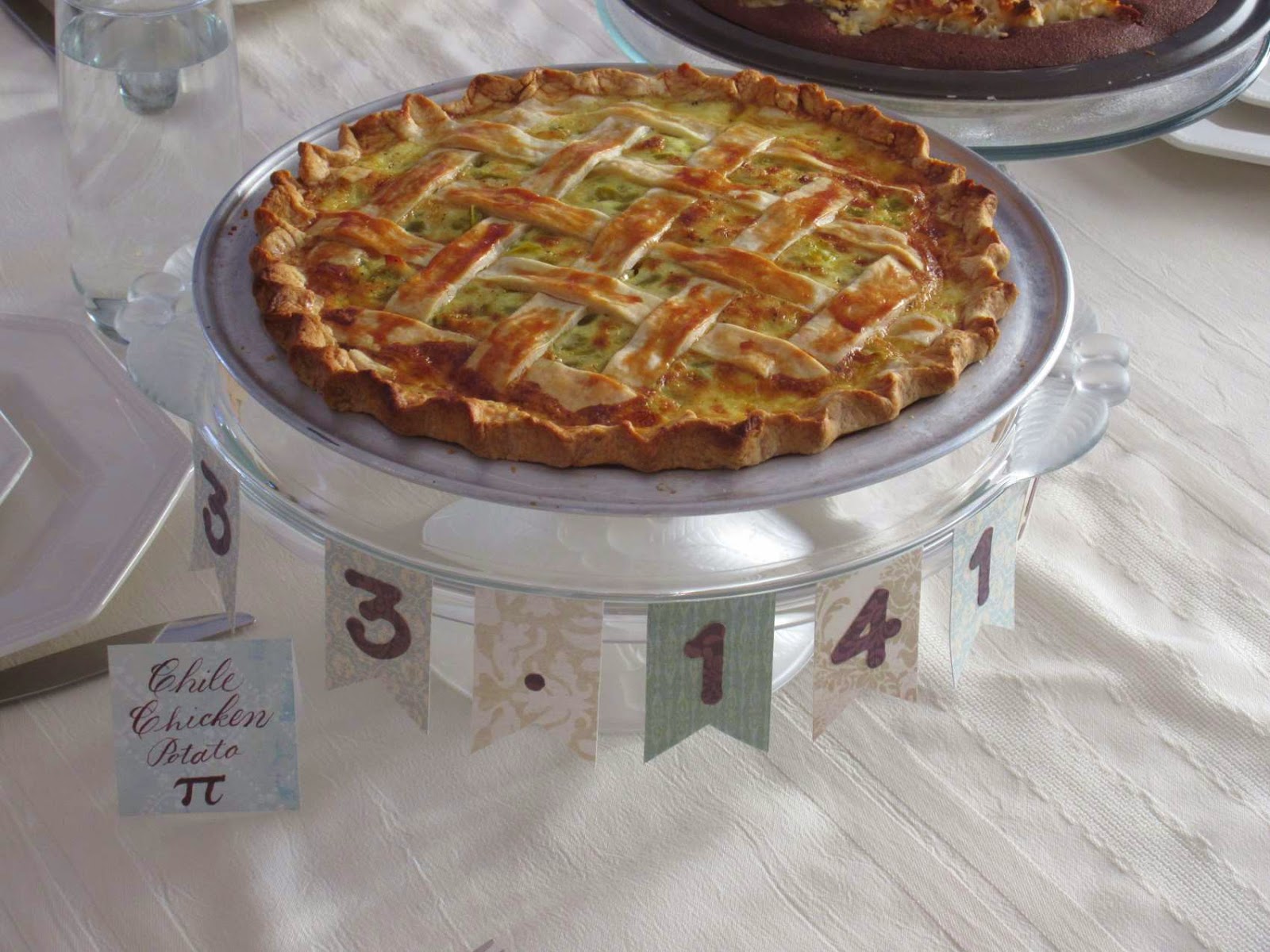 Our first course was this Chile Chicken Potato Pi decorated with the first 15 digits of pi on little banners around the rim of the pedestal supporting the pi. This was our first try for this recipe, which received thumbs up from the family and will be repeated again some day! 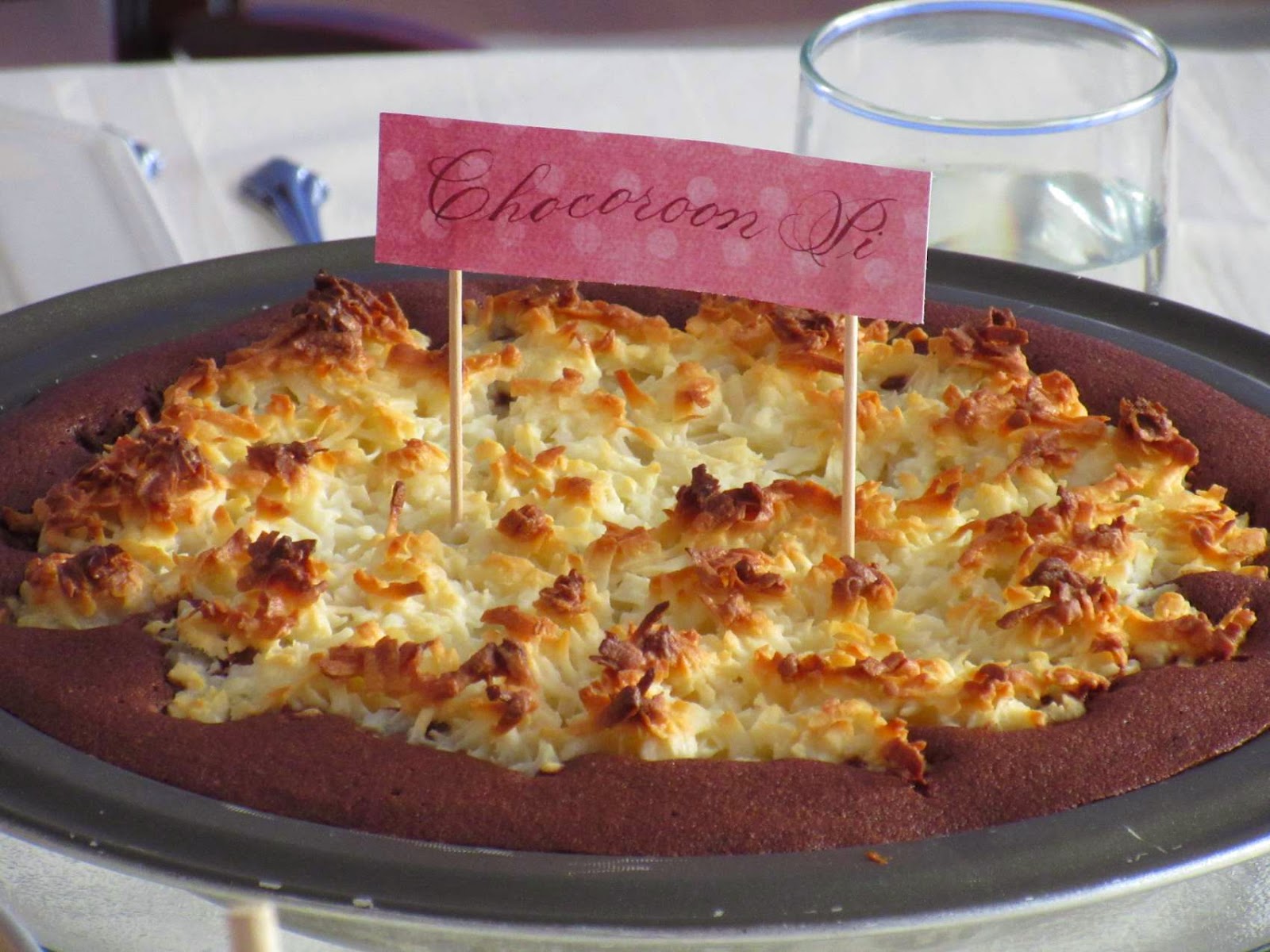 The first dessert course was this Chocoroon Pi that is a family favorite. 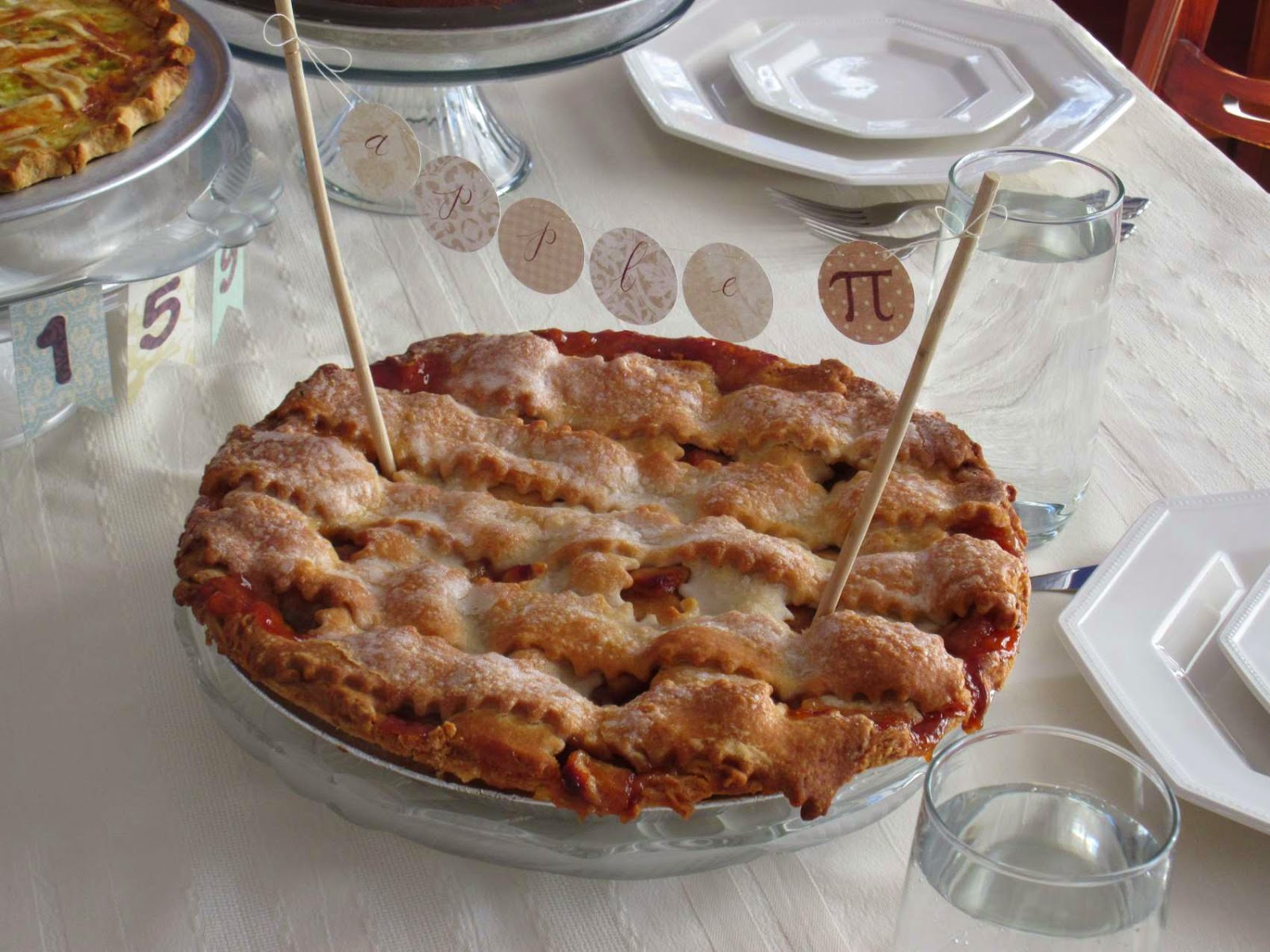 Costco provided the second dessert course with their jumbo Apple Pi. We had one of these a few months ago, and found it to be one of the best apple pies we've ever tasted, hence it's appearance on our table again tonight. At 75 ounces, this monster would challenge any contestant at a pie eating contest!

As I'm writing this, it occurs to me that there was one moment in history when the date and time matched pi even better than today: March 14, 1592, at 6:53:58. I guess we'll have to content ourselves with the second most significant celebration of Pi Day.

I'm also aware that some guides to the Greek language suggest pi should be pronounced "pee." When considering celebrating this important number, I'd rather trust the common modern pronunciation than spend more than a few seconds contemplating celebrating per the other pronunciation.