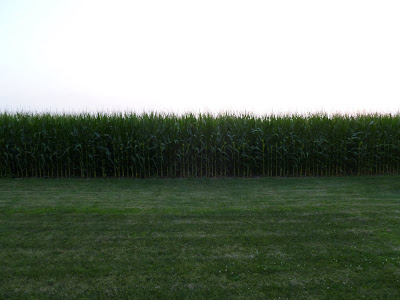 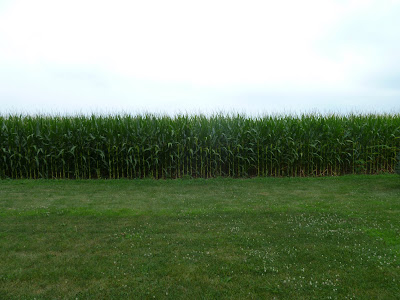 July 24
Height = 101 inches
Last week growing degree days = 254
Historical average growing degree days = 180
Growing degree days since planting = 1708
Historical average since planting =﻿ 1507
The week preceding July 17 was warmer than average, and found the corn stalks pushing 11 inches higher despite the plant's need to push energy into pollinating and growing ears.  The corn should have passed the pollination midpoint during that week although my amateur observations failed to recognize clues of that event.  The following week was much warmer than average as evidenced by the 254 growing degree units recorded in just seven days.  Unfortunately, hot weather during the pollination cycle could be disastrous for the plant.  Dry heat can stress a plant that doesn't have access to sufficient moisture, and the stress can limit the effectiveness of the pollination. Any ovules not fertilized during the short pollination window will not form kernels, and if the kernels are limited, the harvest is poor. 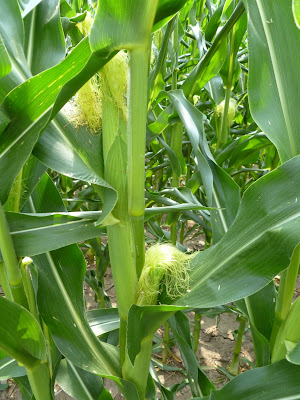 This is one of the stalks on the 17th showing a major ear and minor ear, both with healthy silks.  The plant was not exhibiting signs of stress as far as I could tell. 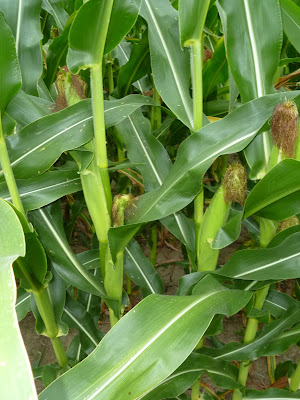 In this picture, that same stalk is to the left of center and doesn't look a lot different than before other than the silks have started to turn brown, indicating they've done their job, and kernels should be forming.  After almost a week of no rain, and temperatures over 90 F everyday, God blessed us with over an inch of rain on the 24th.  Hopefully that's sufficient to ward off stress in the short term until the weather returns to a more normal pattern.  Check back again next week to find out if normal kernel development continues!
Posted by Mr. Riggenbach at 10:50:00 PM 3 comments: Links to this post

July 10
Height = 90 inches
Last week's growing degree days = 186
Historical average growing degree days = 174
Growing degree days since planting = 1255
Historical average since planting = 1152
The conditions must have been right for growth this week, as the corn went through an "adolescent-like" growth spurt in more ways than one!﻿  Our "measuring stalk" gained 26 inches, the tassels finally appeared, and the silks made their appearance as well.  Farmer Wagenbach informed us that the variety in the field this year reaches its mid pollination point at 1292 growing degree days, which will be reached this week.
﻿
On Sunday about half of the stalks had tassels showing, but by today all the tassels appear to be out and spread.
The silks were noticeable on most of the stalks, and the ears are developing quickly.  A week ago, I didn't notice any silks.  This week, they're noticeable both visually and olfactorily.  At least I think it's the silks I smell; maybe the pollen gives the plant its distinctive odor.  If anyone knows, please educate me in the comments section.

For those keeping score, the 90 inch stalk height this week ties the height of the 2009 corn in its eighth week.  Thanks for visiting!
Posted by Mr. Riggenbach at 10:41:00 PM No comments: Links to this post

Hops on the bine

You might remember a previous post that ﻿showed a healthy sprout that was new to our yard.  That sprout was one of six hops rhizomes planted in mid April, and all six have been growing steadily ever since.  The two plants on the left side of the photo below are the Cascade variety, and the four on the right are Willamette.
The Willamette rhizomes were more dormant than the Cascade when planted, and have lagged in growth so far, but all the plants appear healthy and vigorous.  I've had to prune several sprouts so that each rhizome only has two or three bines left to grow, and several of the bines have lost their leading central stem and have adapted by pushing lateral branches upward.  I've followed the common practice of stretching a wire for the bine to grow on, and it didn't take much coaxing to get the plant to wind itself around the wire clockwise while climbing ever higher.
This photo shows one of the Cascade plants that is over 11 feet long.  Cones have developed in the last week, but the main bines continue to stretch forward and shoot out branches.  None of the Willamette plants are displaying cones yet, but I wouldn't be surprised if they popped out in the next two weeks.


Here's a zoomed-in view of a few of the cones in an early stage of development.  Dozens of these little flowers have emerged in just a few days, and I anticipate it will be entertaining to watch them grow and develop.  I'll do my best to document as much of the cone development as possible.  Thanks for visiting!
Posted by Mr. Riggenbach at 10:18:00 PM 3 comments: Links to this post

Since I try to measure the same plant every week, the plant I've chosen may not represent the tallest stalk in the field, nor is there any guarantee it will be average.  This week I measured neighboring plants more than 10 inches taller than the one I reported, while others lagged our subject.  I will continue to measure the same plant we've followed to this point, but I may mention anomalies as they appear.  Thanks for visiting!
Posted by Mr. Riggenbach at 10:29:00 PM 10 comments: Links to this post