Few things are monitored as closely on this blog as the crops that grow in the field behind our house, so I was surprised to see harvesting in that field weeks before I expected it. Although the corn was maturing nicely despite an abundance of rain early in the season, no variety I'm aware of would produce kernels that would be mature and dry enough for selling the grain "as is" after less than 16 weeks. Instead, we've been treated to a show unlike any other we've seen in the backyard over the past 8 years -- harvesting for silage! 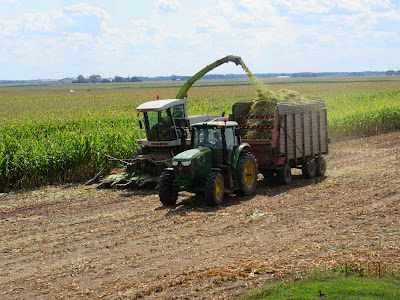 
What at first glance appears to be a regular combine that separates the grain from the rest of the plant, is a harvester more like a lawn mower than a combine, since the entire plant is cut down, chopped up, and loaded into the wagon traveling next to the harvester. That plant matter, which is still very green and moist, is stored in big plastic bags to be consumed by cattle later this winter. This field is now managed by a family that has several cows to feed, so about two-thirds of the plants were harvested as silage now, while the remainder of the field will wait for a few more weeks to eventually have grain harvested from those plants. 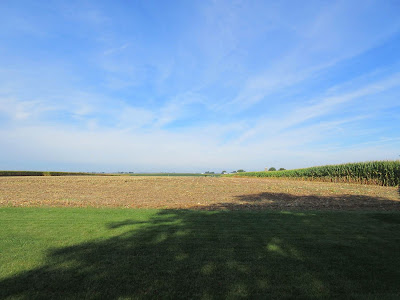 The view to the west on August 22 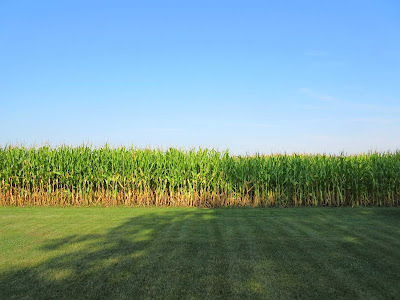 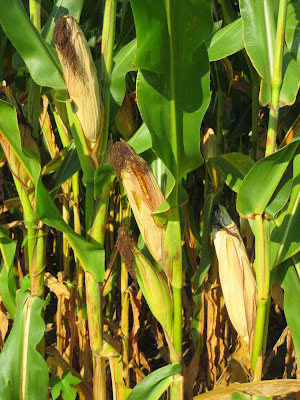 Since I hadn't posted photos of the crop on the 15th week, I've included these photos taken the Sunday before the silage harvest. More stalk drying is evident, and the kernels on the ears are peeking out from between the husks on some of the larger ears. The video below was shot after the silage harvest left a few ears untouched, which gave us a chance to examine the kernels up close.

As I noted in the video, these ears indicate the the harvest could be pretty good on the remainder of the field in a few weeks. The second video below gives a better view of how much corn is left in the field.

We'll continue to watch the rest of the corn until harvest, but since the view from the backyard won't change much, don't expect the typical reports. Thanks for visiting! 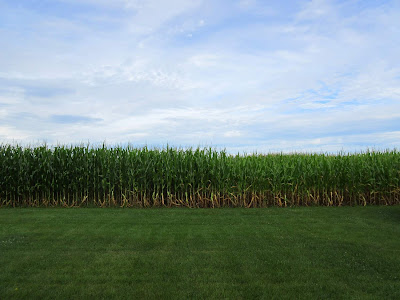 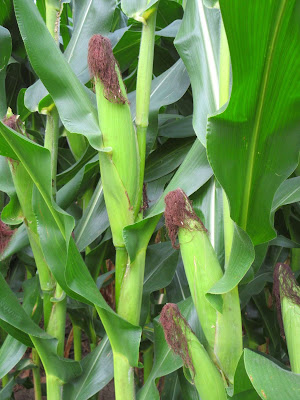 During the week before July 26, we received about 7% more heating degree days than normal, and the ears continued to fill out. Rain, which was plentiful earlier in the season, was more rare this week which probably contributed to the stalk drying evident in the top photo. 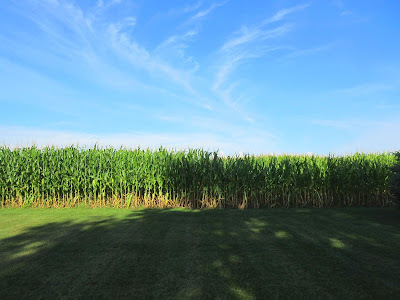 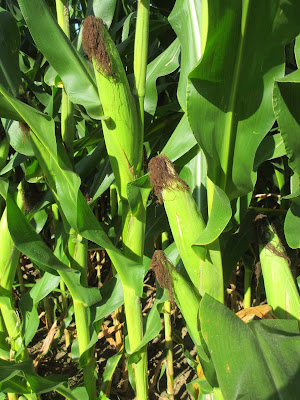 The week before August 2 was warmer yet, registering 210 heating degree days compared to the normal 177, which is almost 19% more. Rain was very spotty around the area, and it appeared that Farmer Wagenbach's field missed any measurable precipitation this week. Stalk drying continued at a normal pace as the ears continued to increase in size. 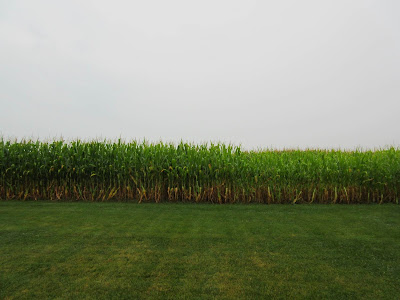 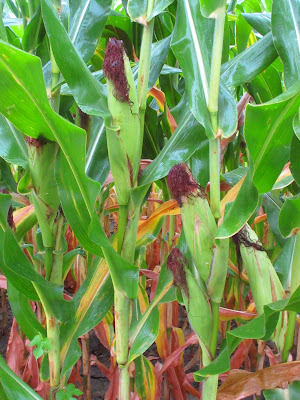 We received our first measurable rainfall in over two weeks on August 9 including a steady shower while I was taking these photos. Temperatures continued above normal, recording 187 heating degree days compared to the historical average of 173. Stalk drying is even evident in the close-up photo, as well as husk drying on the ears.

The cloudiness count is up to nine Sunday mornings this season in which the sun didn't cast a shadow during our photo session versus five in which shadows were visible.