One of the next projects on the barn garage is adding gutters. The gutters and downspouts have been purchased already, but I felt the need to do a little research on the gutter hangers. The gutters on our house have aluminum hidden hangers like the one pictured immediately below, but we have enough sagging and deformation in those gutters to lead me to believe that they are not the best choice available. The website for Sampson hangers shows a test that illustrates how much stronger their brackets are than the version I have on my house. The test looked simple enough that I figured I could duplicate it in my basement and expand their test to include a product that appeared to be stronger than my hangers even though it may not be as strong as Sampson's product. 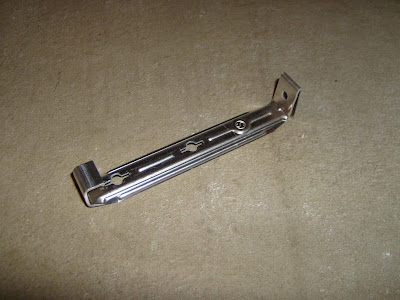 This is DUT (design under test) #1, a simple, cheap bracket that is almost identical to the brackets in the gutters on my house. 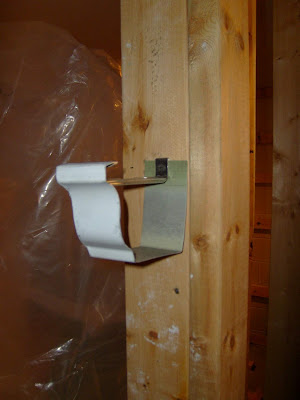 This is the test set-up showing a small section of 5" gutter supported by one hanger securely fastened to a wooden post. I was attempting to duplicate what Sampson had done, even though this test doesn't accurately model the typical loading on a gutter, and does not recognize the stiffness inherent in a longer section of gutter. With those shortcomings identified, we attempted to duplicate Sampson's findings. Sampson weighed a 24" section of gutter and found that it weighed about 15 pounds, hence if a similar gutter has brackets spaced every 24 inches along its length, each bracket should be capable of supporting 15 lbs. They showed a simple bracket sagging significantly under only 15 lbs of load, so we started our testing with a 15 pound weight like that shown on the Sampson website. 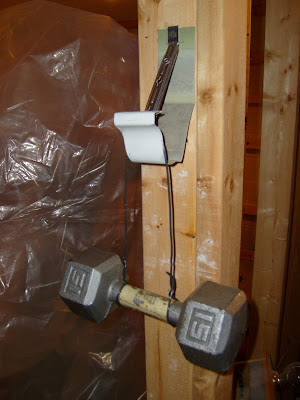 As you can see, we also measured significant sagging. Four inches of sagging, to be exact, when measured at the top front edge of the gutter. Since our gutters have been known to hold a lot of water in the low spots, it's no surprise that they are sagging. 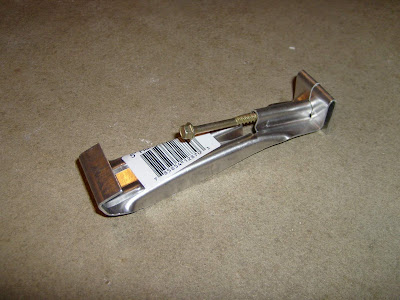 This is DUT #2, a bracket that is prominently displayed in a large bin in the gutter section at Menards which leads me to believe it must be the popular choice for most purchasers of gutter supplies at that store. The integral screw and deeper side flanges make this bracket appear stronger than DUT #1, so we decided to test it to see if we could expect it to perform better on our house than the brackets currently in use. 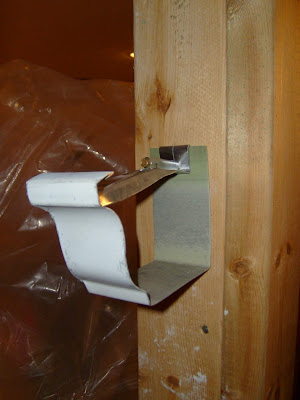 This is how DUT #2 looked when ready for testing. I noticed that the outer edge of the gutter naturally sat a little lower than the flange against the "fascia," but I think bending the fascia flange slightly could have altered its resting position. This observation should not affect performance since sagging was measured from the initial unloaded position. 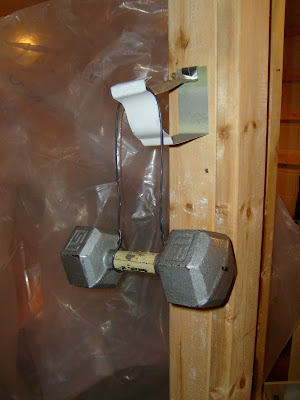 When the 15 lb load was applied, DUT #2 sagged slightly to a position 3/8" lower than the initial position. When the load was removed, the bracket returned to its original position meaning no plastic deformation had occurred. Encouraged by that result, we decided to increase the load on the bracket. 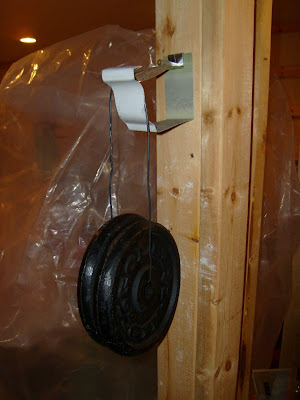 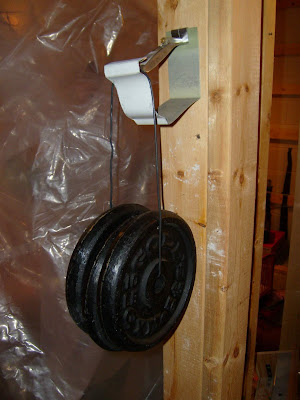 Conclusions: As we consider gutter damage we've observed in the past, it seems to occur mostly due to heavy snow and ice loads. For gutters in those parts of the world that never experience snow and ice, DUT #1 may suffice. If you've any chance of a snow or ice dam on your gutters, our testing seems to indicate that DUT #1 will probably fail at some time.

Based on the assumption that 24" of 5" gutter full of water weighs about 15 lbs, DUT #2 seems capable of handling this load without failure. Our testing also indicates that a 20 lb load can be endured by DUT #2 without permanent damage. It is only with loads over 20 lbs that one would risk failure with DUT #2, so with good gutter maintenance, one might expect DUT #2 to last as long as the gutters it supports.

Why did we bother to perform this testing in the first place? If DUT #2 were available at Menards for the same price you can purchase a similar product online, this testing may not have occurred. Menards' price for DUT #2 is $1.45 each, while a similar product can be purchased online for less than 50 cents each. In fact, the Sampson 5" Hangdog bracket that is reputed to hold 80 pounds with only minimal deflection can be purchased for 93 cents each. Hence the dilemna for a cheap engineer. Armed with this additional test data, however, one can move forward with confidence in their purchase.

If anyone would like me to perform testing on a different style bracket, simply send me the bracket and I'll be happy to perform the test and report the results. If you've read all the way through this post to this point you may be just about as pathetic as I am. Thanks for stopping by!
Posted by Mr. Riggenbach at 9:05:00 PM