Does Outside Air Temperature Affect MPG?

Most of us that have driven vehicles in cold weather have recognized that they consume more fuel as the outdoor temperature drops. We might attribute it to letting our cars sit and idle in order to maintain a warm interior, or we might surmise that slippery road conditions reduce fuel efficiency. While both of those factors decrease fuel efficiency, I've gathered some data that indicates the temperature of the ambient air also affects the efficiency of internal combustion engines.

I began collecting data on February 9 this year using my 2013 Volkswagen Passat TDI SE with a diesel engine and manual transmission. My car has a meter that calculates average fuel economy (miles per gallon) for each trip, so I've been recording the fuel economy for my trip to work each morning. My route is identical each day and while my data doesn't represent an entire year, the temperature range is wide enough that I don't expect significant changes in the data over the next seven months. Road construction on my route added a detour beginning April 2, which increased the distance and added more 45 mph zone driving to the trip. I've noted the route change in my data, but what's presented here includes data from both routes. 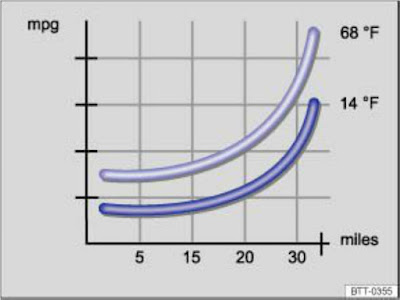 My Volkswagen owner's manual includes this chart that predicts an increase in miles per gallon as trip length increases and also as temperature increases.  Volkswagen's chart implies that my fuel economy would increase further if my commute were longer than my current 30.8-mile trek. I attribute that effect to the inefficiency of an internal combustion engine at temperatures lower than the normal operating temperature, and to a lesser extent the higher losses in the powertrain due to cold lubricant. I have observed that it takes about 7 minutes for the temperature gauge to settle at the normal operating temperature in the winter, while it only takes about 5 minutes in the summer. Since my data covers nearly the same route every day, my chart doesn't duplicate Volkswagen's, but includes more temperature data than VW's two series. 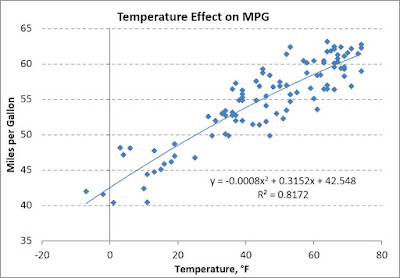 My data indicates a pretty strong correlation between increasing ambient temperature and increasing fuel economy. The regression curve added to the chart reveals that the correlation is almost linear, but a slightly better fit to a second-degree polynomial with a stronger effect at colder temperatures. Although the coefficient of determination (R²) is relatively high at 0.8172, the scatter in the data convinces me that there are other variables affecting fuel economy besides temperature. Wind, traffic congestion, and speed are all obvious effects that probably contribute to the data scatter above. Some of these are out of the driver's control (wind or road conditions), while driving behavior clearly affects mpg and is clearly in the driver's control.

For my data, I've tried to accelerate consistently from one day to the next, I set the cruise control to the same speeds as much as possible, and fortunately traffic density does not often affect my speed at the time of day I make my commute. To reduce the variables related to air temperature, I drive no differently when the engine is cold in the winter than I do in the summer, i.e. my car doesn't sit stationary while "warming up" in the winter.

I chose one temperature each day based on the temperature recorded by the National Weather Service even though the thermometer in my car leads me to believe the temperature may vary by a few degrees over my route. More complex data gathering and analysis is possible, but is not included in the data I've presented. Since temperature alone does not represent the only effect on fuel economy, I've also collected data on other variables that should prove insightful in understanding fuel economy trends. Those data will be presented in future posts right here. In the meantime, it has been comforting each day to recognize a factor out of my control that can be used to predict fuel consumption for that trip.