The best things about Wisconsin

We just got back from spending a few days in Wisconsin, and we feel qualified to share with you what we believe are the best things about Wisconsin (in no particular order). 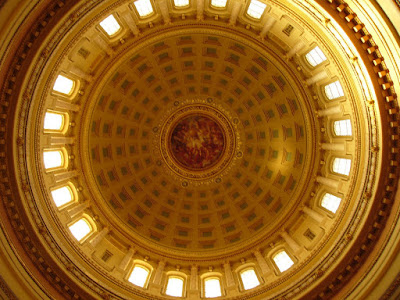 The Capitol building in Madison is built around a magnificent rotunda and is the only state Capitol ever built on an isthmus. The photo above is the view of the inside of the rotunda from about 200 feet below its peak. The mural in the middle is titled "Resources of Wisconsin," and though I do have a fairly clear photo of it, I'll not share it since not everyone in the mural is fully clothed. The ceiling of this rotunda is the only granite dome in the United States. I'm told the view is best enjoyed while lying with your back on the floor in the middle of the room, but I chose the second best option of craning your neck to view directly above you. 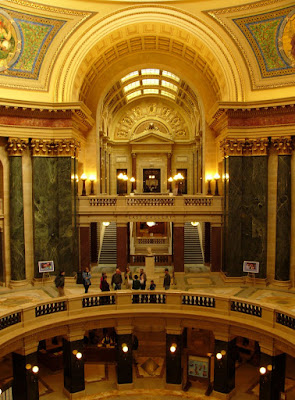 This is the view from the west gallery looking across to the east gallery which happens to be the home of the Wisconsin Supreme Court. If you look closely you'll see a larger-than-life gold badger perched above the door leading into the court room. I'll leave it to you to determine the significance of a 1,000 pound badger overseeing the activities of the highest court.

Also visible in this view are some of the 43 varieties of stone found in the building, which was built from 1906 to 1917 and cost $7.25 million. That was probably a lot back then, and for all we know, the state might still be trying to pay off the debt. 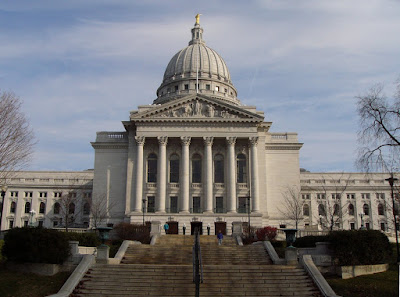 We think the outside is pretty in a Capitol sort of way also. To our amazement and delight there were no metal detectors, no x-ray scanners, and no enhanced pat-downs -- one just walks right in. 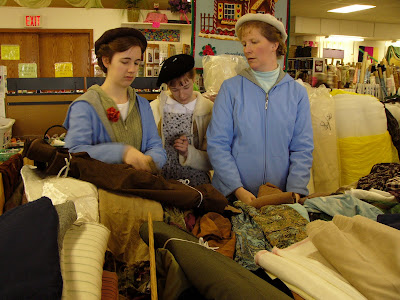 Another one of the best things about Wisconsin is Mill End Textiles in Eau Claire. We became fans of the chain of stores when we lived in Minnesota, and occasionally find opportunity to visit when we're "in the area." They don't have everything, but they have a decent selection of wools and fleeces, and the employees are very generous. When measuring fabric, they include about four extra inches in each yard, and when we checked out they gave us the coupon price even though we had no knowledge that a coupon existed. Consequently, we bought 7 yards of wool suiting for less than $9. Total. Did I tell you this place is one the best things about Wisconsin?

Although it may be hard to tell in the photo above, Karen and Lily are in the process of successfully matching two fabrics for a dress for Karen. Those expressions show a small fraction of the satisfaction they actually felt when they realized how little they had to pay for the fabric. 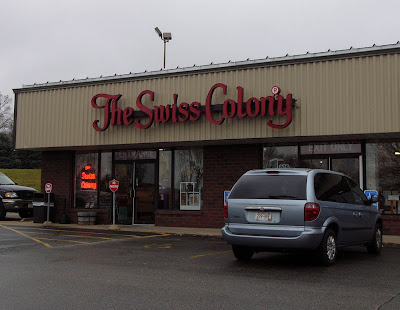 The last "best thing" I'll share is The Swiss Colony outlet store in Monroe. You may be familiar with this mail order and internet company famous for their cheeses, meats, and chocolate desserts. The Swiss Colony headquarters and factory is just down the street from this retail store that not only has many of the catalog items, but also has factory seconds on several of its desserts. At significant discounts.

Okay, maybe these aren't the BEST things about Wisconsin, but on this trip, they come pretty close.
Posted by Mr. Riggenbach at 9:56:00 PM