A few weeks ago, we shared the data that indicated our winter temperatures were about as close to average as possible this year.  As we look at the entire heating season, the data looks a bit different.  If these charts look unfamiliar, see the footnote at the bottom of this post for an explanation of the data presented in the charts. 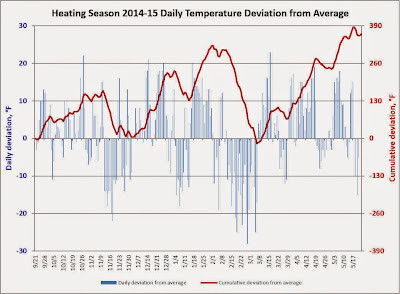 The entire season can be summarized by the position of the red curve at the right side of the chart, where it's apparent that over the entire season our daily average temperatures were considerably warmer than normal.  We accumulated 361 degrees of daily deviation above the average, which means each of the 244 days of our heating season (yep, that's about 8 months!), averaged about 1.5 degrees warmer than normal.

Recently it occurred to me that all our readers may not have gleaned all the information these temperature charts can communicate, so I present the next chart as an educational tool. 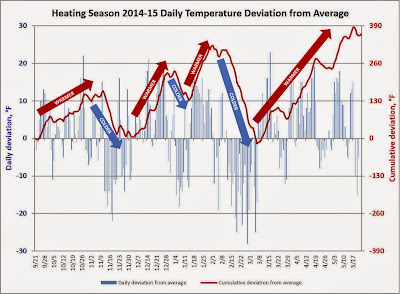 I include the red cumulative deviation curve on these temperature charts for two main reasons: (1) the ability to determine how the data as a cumulative total compares to historical norms, and (2) to recognize trends in the temperature data that may not be easily apparent in the blue daily deviation bars.  On this chart I've added red (warmer) and blue (colder) arrows to illustrate the trends indicated by the red curve (feel free to click the chart for an enlarged view).  In case you hadn't noticed, when the red curve slopes up from left to right, that indicates that the daily deviations from normal have been predominately warmer than average.  Likewise, when the curve slopes down from left to right, colder deviations have predominated.  One can easily recognize at least seven extended temperature trends through the last heating season: four when warmer temperatures prevailed, and three when the daily averages below normal outweighed those above normal.

Since temperatures that were near normal would present a red curve that was roughly flat from left to right, I found it interesting that we seldom observe that characteristic in our temperature data.  Instead, it seems our temperatures are either well above normal or well below normal, leaving very few "normal" days!  This lead me to conjecture that a histogram of the daily temperature deviations for an entire year might look different than the normal distribution, or "bell curve" that one might expect. 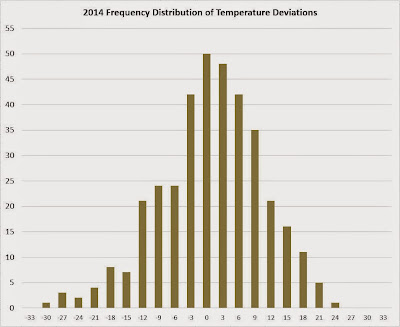