Our observant readers probably noticed something unusual in the photo accompanying the last post. As is my custom after the first mowing, I included a photo of our yard that showed an empty spot where we used to have a spruce tree. I had to make the painful decision recently to remove that tree, and I hope my experience can help someone else avoid the loss we've endured.

About a year ago I noticed some brown spots on a few branches of the tree, but since they were high in the crown and limited in number I didn't give them much thought. The brown sections grew in size and number over the next few weeks, prompting me to investigate more closely. Although the image below was taken this spring, the general appearance of the tree approximates what I observed early last summer. 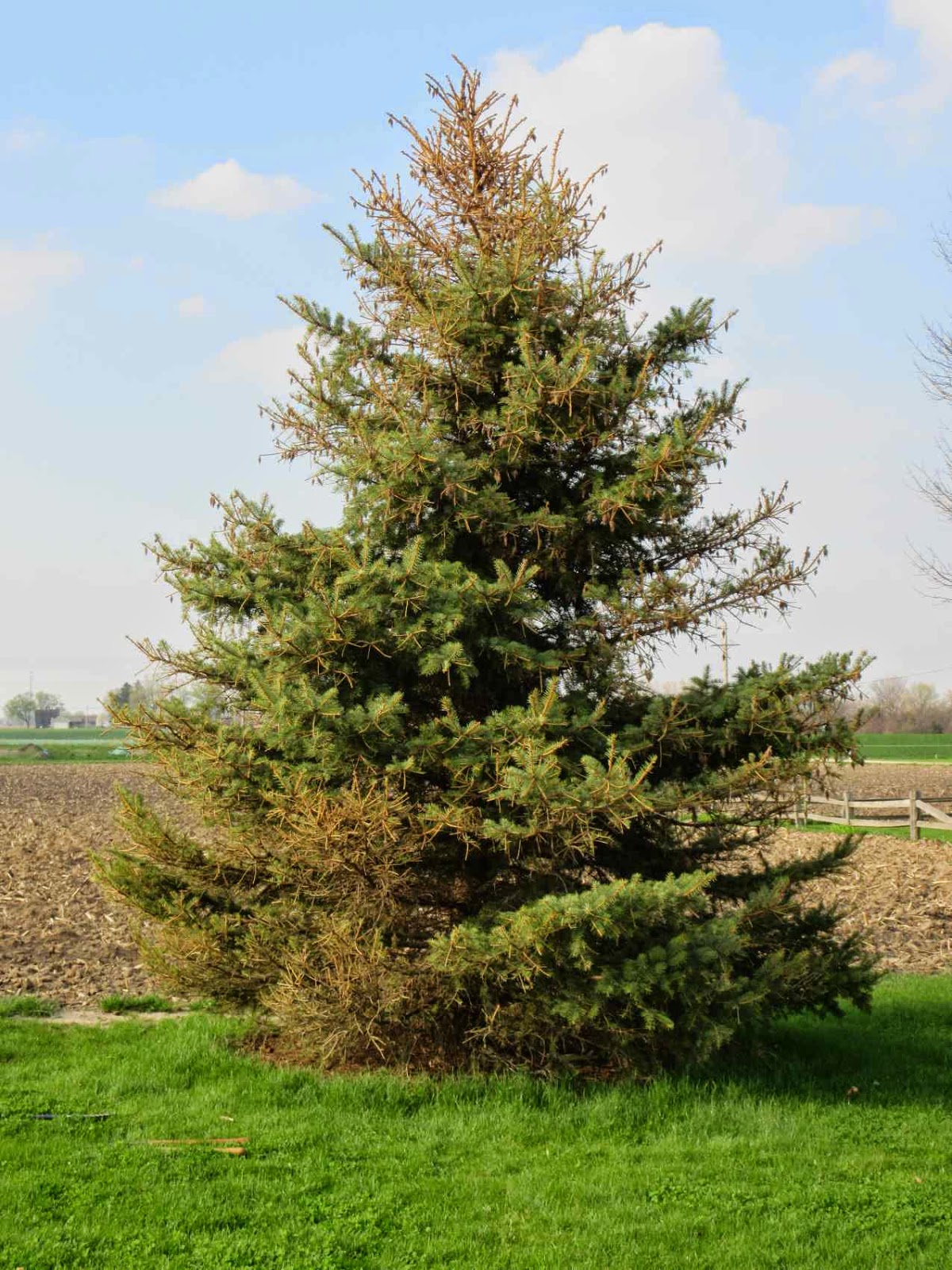 On closer observation I found small clusters of dead needles hanging from the defoliated branches. The needles were held together by silky thread surrounding a small, black worm that would actually navigate a tree branch collecting needles for its cocoon. One could detach these worms from the tree with a slight pull near the base of the cocoon, so I spent most of one afternoon pulling worms off my tree. Unfortunately, many branches had already been defoliated, and although I removed hundreds of worms, there were still hundreds (if not thousands) of worms remaining, destroying more needles every day.

A little online research identified the pests as a bagworm that feeds on both evergreens and deciduous trees, but since spruce trees don't regenerate their needles, the damage to conifers is more noticeable than when these pests attack deciduous trees. My only consolation was the fact that the worms finished stripping branches by mid summer. The males emerge from the cocoons in a few weeks as a moth to fertilize the females that remain in their cocoons, and the fertilized eggs remain in the cocoon until late spring the next year. 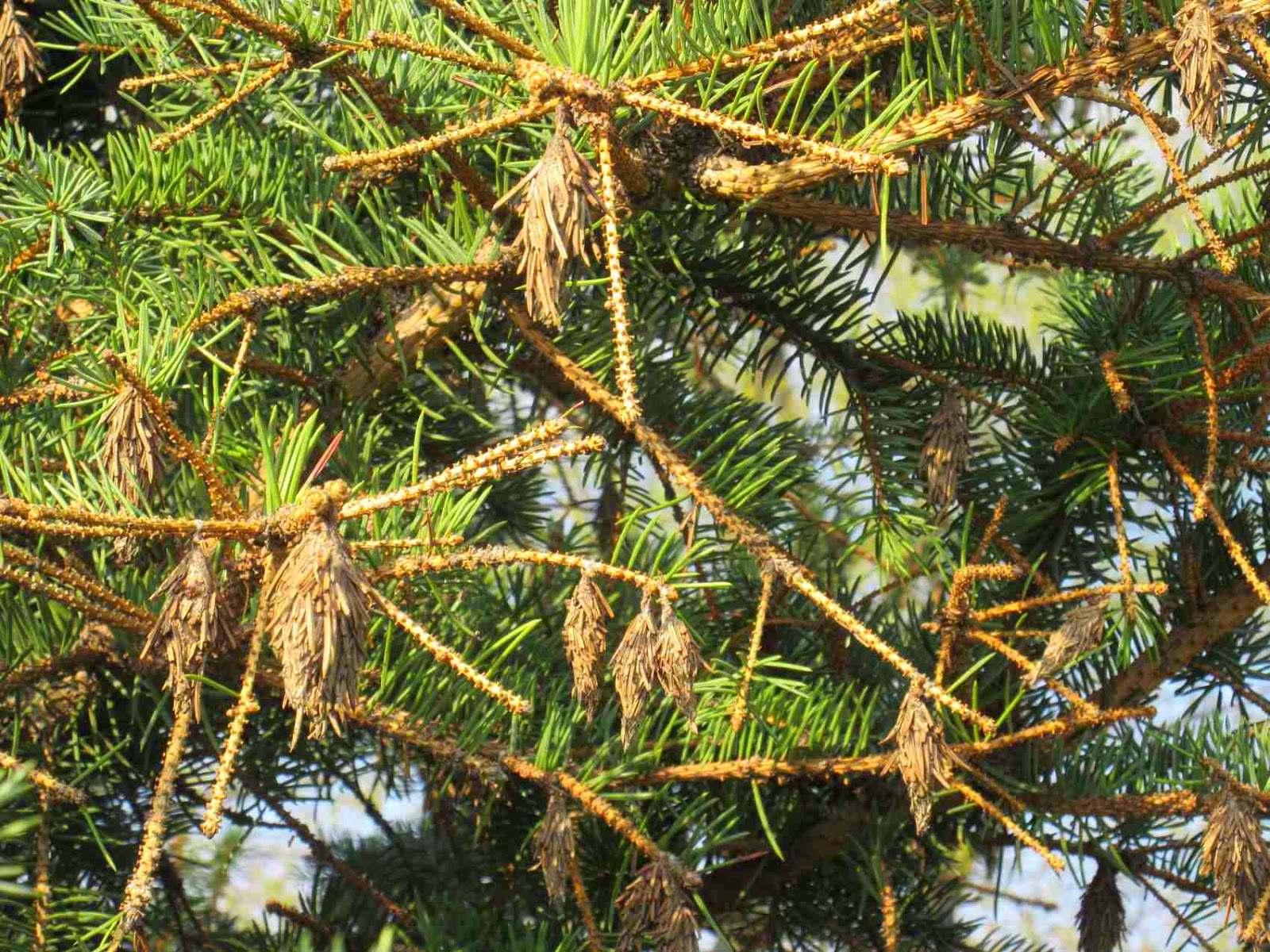 This image from a few weeks ago shows several cocoons that had remained intact through the winter, some of which may have contained eggs ready to hatch into thousands of worms this spring. I removed a few hundred of these nests before I gave up. The tree was already badly damaged, especially in the crown, and if only one nest remained unpicked, I would have hundreds of worms to deal with by early summer. Since I have another spruce about 50 feet from this one from which I've already removed a handful of cocoons, I decided to destroy the damaged tree in an attempt to arrest the spread of the bagworms. 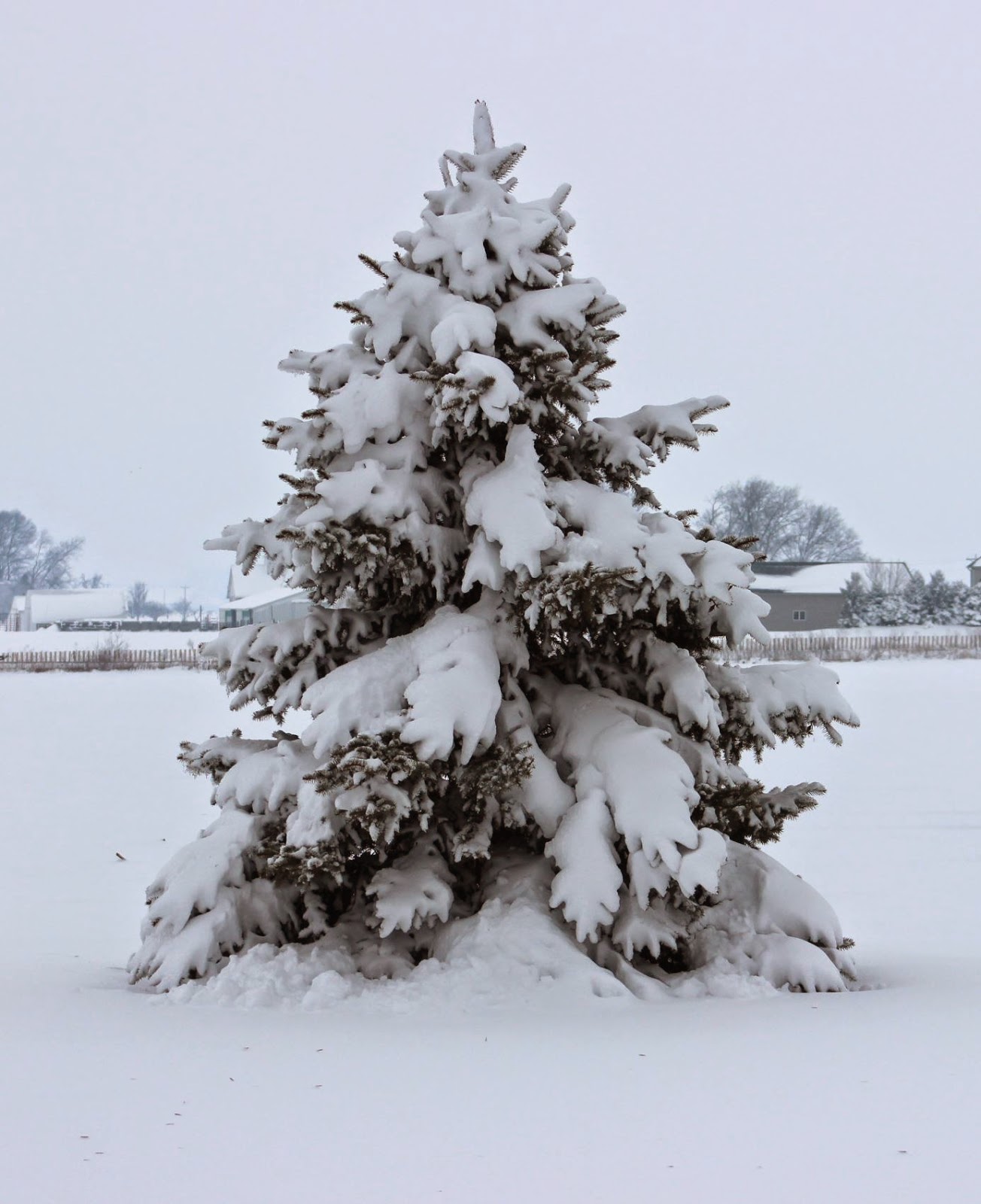 Even though I felt my options were severely limited, the decision was still hard. I considered the tree an exemplary specimen of its genus, and enjoyed watching it grow larger each year. The image above from December 2013 shows the beauty of both the tree and the snow, in my opinion. Ironically, there were obviously bagworm cocoons in the tree when this picture was taken, since the worms showed up just a few months later. That winter was also the coldest we've had here in recent memory, which doesn't offer much hope that cold weather might kill off the bagworms.

I vaguely recall seeing a few cocoons on this tree in 2013, but they didn't excite enough curiosity in me to cause me to investigate. Now that I recognize bagworm cocoons, I won't delay in acting in the future. Hopefully others will learn from my experience and will save their trees before it's too late.