We did something this year that we have never done on Thanksgiving day... upholstering furniture! After a large and delicious early afternoon meal with the Galat family, most of the family members wandered off to find suitable napping arrangements. Our family sequestered ourselves to the office where we proceeded to apply new covers to the seats of our dining room chairs. Karen and Lily had removed the old upholstery the day before and cut the new fabric to size along with more batting to increase the loft on some of the chairs. We took the fabric, batting, bare seats, and tools to Karen's brother's house so we could redeem the time. 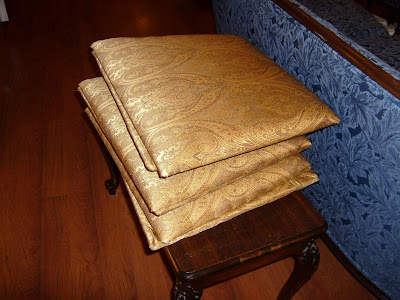 Here are a few of the finished seats waiting to be reunited with their chair frames. 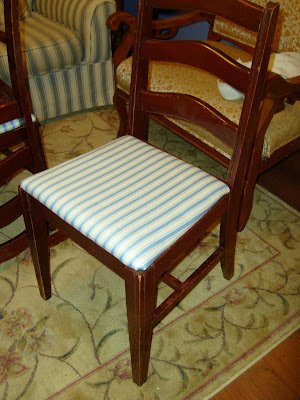 We actually recovered chairs from two different sets. The blue stripe that you see above is what we had used to cover these older chairs back in 1996. We still had some of the original fabric, so the three chairs that we have left from that set got a facelift. 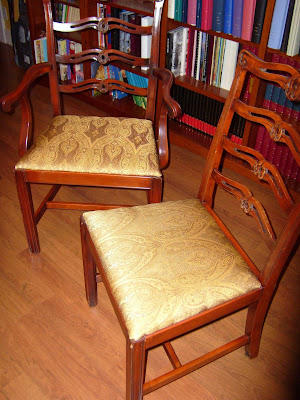 We originally recovered these chairs in 2000 after purchasing the dining set at an estate sale. Eight years later the fabric didn't look too bad until it was removed and the faded portions could be easily compared with the unfaded. Ewww... they were definitely due for a fresh touch. Which makes me wonder, is eight years a long time to go between upholstering jobs, or a short time? We realize we are always hopelessly out of style, but how long has furniture fabric lasted for other people? Thanks in advance for your comments....
Posted by Mr. Riggenbach at 9:22:00 PM