Only one picture for the update today, although from what I'm told, a movie of the beam setting today would have been good entertainment. Maybe next time. Gene and Sam managed to get both laminated beams in place today. The first one was a challenge as they tried to muscle it into place, only to have it fall and break a sawhorse. Eventually number one submitted to their efforts.

The manipulations involved in putting beam number two in place would have made G. A. Henty proud. The guys used the truck as an intermediate resting place for the beam and as a fulcrum about which it could be pivoted until it was resting on top of the garage and easily dragged and pushed up on top. They seemed pretty pleased with themselves for getting the beam in position without putting themselves in too much danger. I wonder which of Henty's books gave Sam the inspiration for hoisting the beam? 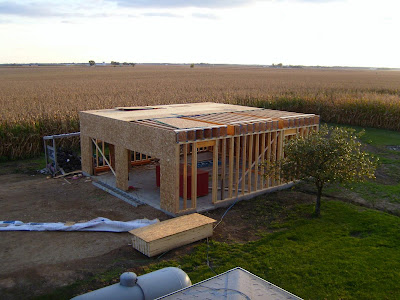 At the end of the day on Tuesday all the beams are in place, and the OSB covers about half of the top surface of the beams. Don't forget to pray for safety for Gene and Sam!