We planned to visit the coast on Sunday afternoon, but by the time we were twenty miles away from the ocean it was apparent that half the population of the U.S. had the same idea that day. We turned around before we were delayed by too much traffic and salvaged our afternoon at Colonial Williamsburg. 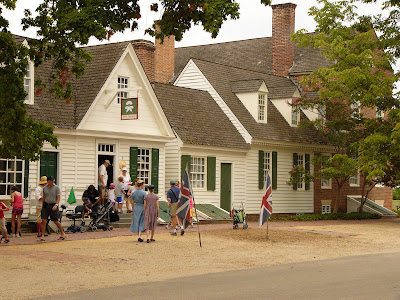 Unfortunately, our old CW passes had expired since the last time we were here, and we hadn't planned enough time in the historic district to justify new passes. Fortunately, you can still visit a few shops and take in the ambience of the old town even without a pass. In this photo, Karen and Gretel approach the Mary Dickinson Store to check on any changes in the inventory since we were here last. The clerk at this store requested we cross the street to the Greenhow Store where there was a clerk that had admired the girls' hats earlier and wanted to chat.

After a bit of inquiry we met Jacki, a homeschooling mom that had worked as a milliner in the past and had a large collection of hats. Jacki told us she also enjoys feminine dress and encouraged Karen and Gretel to continue collecting hats (fortunately we don't have 400 like Jacki). The visit was enjoyable enough that we will look for Jacki at the Greenhow Store when we visit CW again. 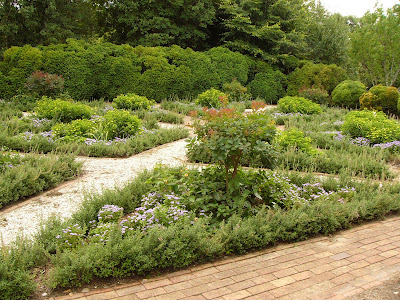 Virginia looks a little different in August than it does in the spring or fall, and it wasn't difficult to notice the difference around CW. The appearance of this garden is a pitiful shadow of its spring display. 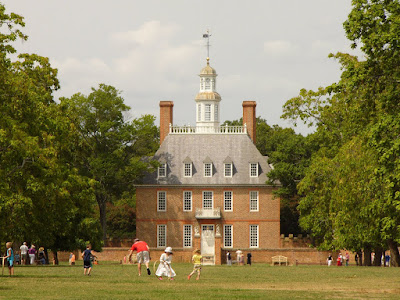 The Governor's Palace doesn't look a lot different, but the Palace Green appears to be more sun-drenched and populated. 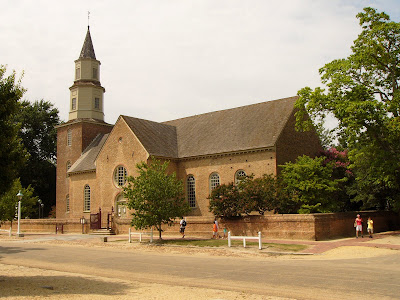 Bruton Parish is as quaint as always, although the blooming crape myrtle is a nice touch I don't remember enjoying in April. 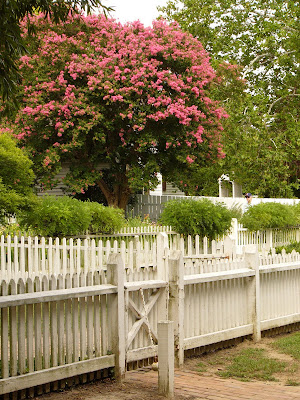 You might remember this crape myrtle from Lily's garment portfolio photoshoot. 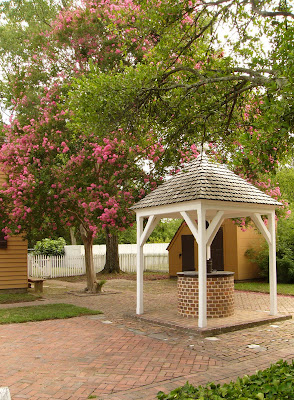 This tidy backyard off Nassau Street is beautified even further by the crape myrtle blossoms. 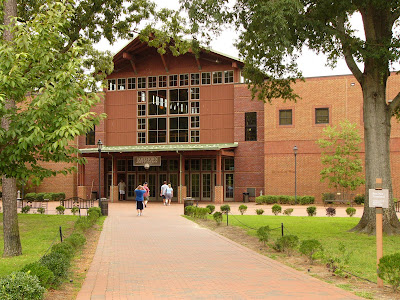 Lily's workshop over the past three days has been held in the classroom wing at Jamestown Settlement. The facility was designed and built especially for Jamestown's 400th anniversary, and we think it's a nice complement to the Historic Jamestowne National Park Service site. 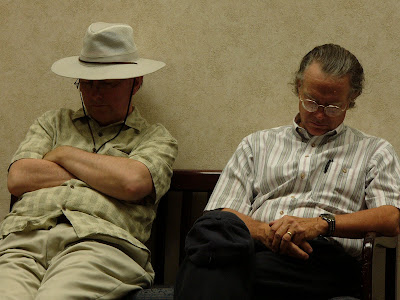 Inside the Jamestown Settlement building, the family members wait patiently for the workshop participants. 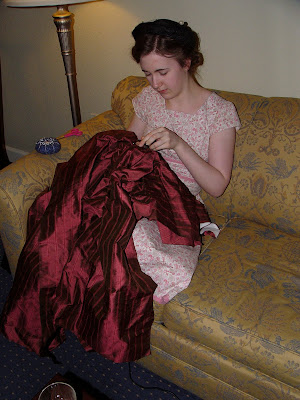 Lily was still busy with hand sewing Sunday evening, and probably will be busy for awhile until this gown is finished. We'll try to post some more photos of the garment in progress, so you can get a better idea of what it looks like.

Since we hit the road for home Monday morning, that's all for our report from Virginia this time. Thanks for visiting!
Posted by Mr. Riggenbach at 11:38:00 AM